How can I keep cats out of guest room, permanently?

If have a guest room in the apartment, and 2 cats, and they have a long-term guest (1-4 weeks stay) in the room who strongly objects to cat presence for health reasons, what can be a possible way to 100% ensure that the cats never enter the guestroom?

The room has a door, but it is impossible to keep closed 100% of time; and the cats are intensely curious and will want to scram into the room the moment the door opens.

Unfortunately, having the cats reside elsewhere is NOT an option (or the guest).

The room has its own bathroom and walking from the room to entrance door is not a problem since the cats are not the kind to closely-enough approach a stranger. The worry is if they get into the guest room, they will end up on their bed/things.

I was thinking there's some sort of chemical or smell that would repel the cats, while being safe to both cats and humans' health.

Guaranteeing 100% absense means either physically blocking the room or removing the cats… so let's call this a 99% assurance. 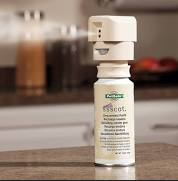 I've had many many cats, and each of them insisted on being somewhere they did not belong. On the counter, in the garbage, digging in the pantry… this thing has stopped them all. It is not only an active repellent, but a training aid to teach them… never. to. return.

It is essentially a compressed air sprayer with a motion detector to activate it when someone gets too close. If a cat approaches, it makes a loud hiss and sprays a stream of air at the intruder. It's quite the deterrent — it almost kept me from using the counter when I got "caught" unexpectedly — but it is completely harmless to the cats and they'll quickly learn to stay away, even if you remove or turn the device off.

At $21.95, it sounds a bit expensive… but the "solution" is actually rarely used, and — bonus — you can re-deploy it at multiple locations throughout the house. One or two encounters with this thing is enough to keep even the most determined cats away from those compulsive areas they just have to explore. I tried for almost a year to keep my cats off the counter before I found this solution.

They don't go on the counter anymore.

And if I think they might try — think Thanksgiving turkey — leaving this on the counter (turned off, so I can approach without getting sprayed) is enough to assure the cats will not give in to that urge to explore.

For your situation, I would suggest placing this in front of the closed door facing outward into the hallway. They will learn quickly. Once they learn not to approach, I would try again with the door open. They will learn not to approach that room. I don't think it will take more than a few tries, but if you think they may forget their early lessons, you can leave the can on the floor (turned off, so you don't get psssssst'd every time you go into the room) as a reminder of what will happen if they approach. You don't even have to leave the can "on". The memory is enough to keep them away and, if they forget, the can is just a reminder.

Install the kitty net in the door frame of the room they reside.
Google, or you can make one yourself. My family has a net installed over the balcony for the cat's sefety, so it could be also installed in the door frame (and the door to the room can stay open). By the way, I make this suggestion as I myself am looking to figure out how to solve the exactly same issue (and just clicked on this site). Good luck! It can be done.

10
How to get Urine stains out of carpet
6
How can I stop cat hair getting onto my bathroom towels?
3
How to get cat pee smell out of a camera
211
How can I keep my cat off my keyboard?
8
How to stop cats from chewing my headphones?
1
Keeping cats out of an area
6
How can I get rid of cats?
2
keeping cats out of open loft
3
How to build a detector to keep cats off kitchen counters
2
Pet detecting sensor