For me, it's impossible to drink milk without it being cold. And sometimes, I'm about to enjoy a bowl of cereal and milk, but I find out there's no milk in the fridge, which means I have to get one from the storage room, which means it'll be warm.

I've tried the "Water-Ice-Salt" technique, but it didn't work for me, probably because the milk container is made of cardboard.

What lifehack exists for this?

If speed is your main criteria, the various life hacks to cool water fast will also work well for milk. See our Quickly Cool a Bottle of Water thread.

The fastest (and most practical) technique I found is wrapping a bottle [of milk] in a wet paper towel and putting it in the freezer. For an average half-liter-sized bottle, you will have deeply chilled milk in about 20-30 minutes. 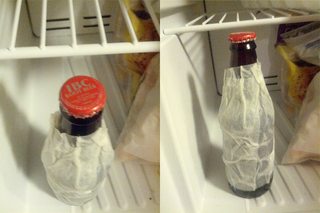 You can also use this technique with your original cardboard container, but cardboard does not transfer the heat as well, and it will simply take longer to cool a container with a larger volume.

i know this seems a bit simple and slightly suprised that it hasnt been sugested allready.

keep one unopened carton in the fridge at all time, this will mean that you will allways have at least one carton of cold milk at all times (unless you use a carton in the time it takes to chill another carton)

Milk box acts as an insulator. Keep an empty glas decanter in your fridge. Pour milk in decanter and put it back in frigde. Large surface of cool decanter will quicker cool milk. Even a bit quicker, if a larger surface of a flat bowl is used.

To get any liquid cold super fast (less then 3 minutes), put 4 to 5 ice cubes in a plastic bag. Those soft ones that you get from a roll at the grocery store work best but make sure they are made for food if you use other ones. Then put the milk on a large bowl, put the bag of ice cubes in the milk. Do not close the bag to let air out, but don't let milk get in the opening of the bag either so hold the opening with your hands. Move the milk and bag around for a few minutes and you'll have ice cold milk without making it watery!

You can hack a bag with cling wrap if you can't find any soft bags safe for food.

This technique will work for a single serving of milk, not for an entire carton.

I haven't tested this, but I imagine the milk will become cold within 10-15 minutes.

When it's cold enough for you, you may want to carefully pour the milk into a large mixing bowl or cake pan, and then pour it into your cereal bowl or glass, to prevent spillage.

freeze some milk in a form so you can crush it easily, when you need cold milk, get the frozen milk and crush it (more surface aria) then put the crushed frozen milk into a funnel with a coffee filter in it (the filter is to stop you getting chips of milk in your cereal) and then pour the milk through the funnel. Don't forget to put more milk in the freezer for next time.

This could also be done with frozen water but that could effect the taste of the milk. You will have to experiment with how much frozen milk to non frozen is needed

one possible way of freezing the milk so you can crush it is by putting it in freezer bags and laying them down so that it forms a thin sheet when frozen.

another idea is freeze a half full bottle of milk on its side or better diagonally if you can so there is the largest surface of milk open to the air. when you need to chill room temp milk, pour exactly the right amount of milk into the bottle. swirl and shake it (not too much as you will mix air into the milk and you will get too much milk) then pour it out slowly, frozen side down. Then put it back in the freezer

i don't how long milk is still fresh when frozen so you may need to occasionally replace the frozen milk. I say only put the milk you want to use in the "chilling bottle" as mixing milk from different containers can reduce the life of the milk plus you would have to then either freeze the remainder milk or use the rest of the unfrozen milk before the frozen defrosts otherwise you will have to replace it. this will work for 2% or less, i dont know at what percentage of fat milk can no longer be frozen in a domestic freezer.

My method is similar to the one by BrettFromLA, but I place a coffee mug or water glass into the freezer. When I want a cold drink, I pour the liquid (milk in your case) into that mug and put the main carton in the refrigerator for later. It's amazing how fast a liquid chills when the glass or ceramic cup it is in is at below freezing temperature. For faster results put the milk filled freezing mug back in the freezer for a few minutes. For a larger volume of cold milk, just freeze more cups.

An alternative is to get some ice rocks (sometimes called whiskey stones) and freeze them for use in your cup of milk.

39
How can I quickly cool a water bottle?

3
How do I quickly thaw the ice in frozen pipes?
9
How to boil milk without a pot?
7
How to make Ice melt slower?
3
How to quickly thaw accidentally frozen milk?
5
How to warm up milk for the baby during a trip?
4
How do I make my room or even an apartment warmer/cozier?
1
Keeping Canned Drinks Cold without Using Ice or Electricity
3
How to open car door when frozen with ice?