In every smartphone I've looked at, the camera protrudes slightly from the bottom of the case, meaning that it is the primary point of contact when the phone is laid down flat: 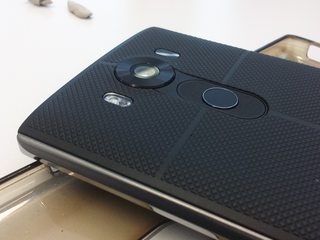 Note that the lens itself is surrounded by a metal ridge, but it is at most recessed by a millimeter, which is a bit close for my comfort. This seems like it would be trivially fixed by addition of small ridges near the camera that would raise the camera portion up 2mm off the table. Unfortunately, this has apparently not occurred to anyone anywhere, and they don't even sell replacement back-panels with this feature, as far as I can tell.

As it is, to prevent the camera touching tables when I put the phone down, I bought a case, but even the thinnest cases are annoyingly bulky for that purpose, and I would prefer not to use a case. Does anyone have any suggestions of a way that I can add my own "ridges" to the back of the phone in a way that:

My first-order solution to test that these ridges would work is to take some gummy tack and stick it on the top of my phone, and it effectively demonstrates that a very thin, low-profile ridge can effectively allow you to place your phone face-up on a table without issue, but it violates pretty much all three of these rules, and it's sticky to boot so it accumulates little fibers: 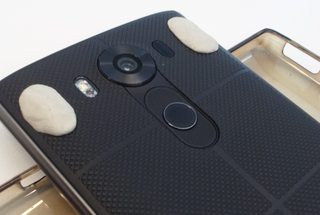 Hard Mode If your solution works best for a phone with a nice flat surface on the back, I can probably make do, but LG evidently thinks it's more "cool" to use a cross-hatched, textured surface for the back of a phone, so preferably design with that in mind.

So here is what I did with my work phone last time. I have a new one now, and its camera is actually recessed so no need. I wish I had taken a photo of it, would be easier to explain. Also, my work phone was IP67 so I felt confident I could work on it in my hobby room. I take absolutely no responsibility for your phone ;)

Anyway here goes: I bought some of these, silicone muffin inlays or moulds or whatever. I have no idea how kitchen people use these, but it is something muffin like. I found only pink ones when I searched now, but I think you can get them in any color imaginable. I had grey ones. Now, cut out the wavy part, keep the bottom. From the bottom, cut out, as precise as you think is necessary a hole that is shaped like the profile of your camera (I am a perfectionist about these things, but you really don't need to be) Then, glue it around the camera. These things are not very thick, maybe you need two slices. I did. If you need more slices, make the first one glued have half the diameter of the second one (if size allows). The idea is to have both pieces glued to the phone.

Silicone does not take glue very easy so glueing two silicones to each other halves the chance of success. Rub the silicone with some 60 sanding paper and don't use any sort of glue, two compund epoxies should do the trick alternatively there are glues that specifically works on silicone. Use one of them. Be sure to compress the silicone discs so a little glue bleeds out around the edges. Use this to "smooth" the edges.

Now you have a round disc covering your camera, it is slippery, lipophobic and hydrophobic so it won't get dirty or stuck as much as any other material (rubber, felt etc).

For a hacker solution, replace the sticky tack with strips of duct tape, sticky side to the case, and stack a few on top of each other to control the thickness. Use colored duct tape and/or have different shapes/areas for the different layers if you want to get artsy. Starting with a slightly wider base and tapering a bit to the upper layers will help avoid a "sudden" extra thickness that is more likely to get caught on things.

For something that looks less like a hack job, a "phone wallet" sticks on to the back of a phone and allows you to put in an ID, RFID transit card, credit card, or whatever else you want to put there, and this would add some thickness in a large, flat surface that could be the primary point of contact when the camera is laid flat. This might provide some of the extra thickness you seek, without a 1:1 increase in net bulk of stuff in your pocket.

Most of these stick on with various gel-like or sticky surfaces; some of the more flexible or silicone-style ones would probably fit into the textured surface better than the more rigid ones.

Branded versions of these are commonly used as corporate giveaways (online example here). You can purchase some custom items for your giveaway here (credit as image source; I have no direct experience with any firm mentioned in this post). 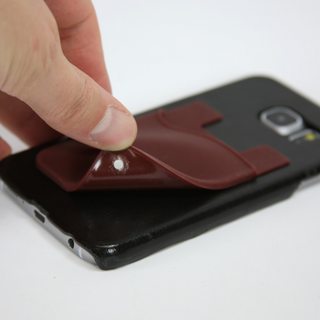 I seem to post about this stuff so often I'm going to end up sounding like an advert for it - I have no affiliation, I just like the stuff, it works for a million things, so here goes...

They have an example putting bumpers on the corners of a phone to prevent screen & camera touching the table, but you could easily modify that to a very subtle stripe across the phone, either side of the camera [Use black & no-one will even notice it]
It goes on like Plasticene, Play-Doh, Silly Putty etc then cures to a rubberised plastic. Once cured it's pretty permanent. I've actually used it to fix chips on coffee mugs, which have since been through the dishwasher hundreds of times.

A quick sketch based on your original photo... 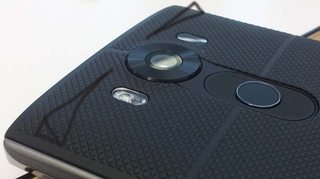 Not the answer you're looking for? Browse other questions tagged phone or ask your own question.

3
How to take macro pictures using any smart phone camera?
2
How to prevent mobile phone in the car from falling when I use it as GPS?
2
Removing permanent marker marks from phone screen
5
Best way to mount a phone in the car
0
Fixing the safety case of the smartphone
0
How to keep silicone mobile case clean and prevent from being yellowish?
1
Prevent phone base from being dragged by cord