Does boiling tap water make it potable? If not, are there other ways (lifehacks) to make it potable without a filter? I saw a related question here on lifehacks, but it only adresses the taste, the answer did not specify if the boiled tap water would then be potable, risk-free to be drunk. I use this boiler, in case it helps: 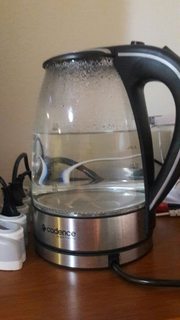 OK, I'm going to go out on a limb here...
To answer the question directly, the answer is an emphatic No.

If there is something 'wrong' with the water to start with, then simple boiling in a kettle will not 'fix' it.

It will not fix:-

You can improve your chances by many methods, but not with only a kettle.

Processes to 'clean' water, but require more than just a kettle:-

Your stove, fuel and a pot are an effective treatment system to combat the full spectrum of biological pathogens. Bring water to a rolling boil for 1 minute; if you’re above 6,500 feet, boil it for 3 minutes.

The only additional supply you need to pack along is extra fuel. Murky water doesn’t impair effectiveness. Serves as a readily available backup method in case your main filter breaks. Cons:

Time and effort required to bring water to a boil. Wait time for the water to cool. If it’s your primary treatment method, you need to pack an extra fuel container.

Boiling water for a minimum time (I recall it as ten minutes, but I could be wrong) will destroy any biological pathogens (bacteria, viruses, parasites) in the water, but will not make the water chemically safe if it wasn't before boiling. If you suspect your water is contaminated with toxic chemicals (lead, cadmium, perchlorates, petroleum seepage, etc.) you should use a suitable filtration system to remove the toxins.

You may also want to boil the water if there's reason to suspect bioharzards, but most high quality filters will remove bacteria and parasites as well as dissolved chemicals. Read the labels to be sure.

I'm not a biochemist or anything, but as far as I know, boiling water will kill any biological contaminants. There can still be remnants or byproducts from them left in the water though, in addition to chemicals, heavy metals, etc.

You should filter first, then boil, if you can. Ideally, distill it.

As a general rule though, tap water should already be considered "potable" to begin with. If your town/city has put you under a boiling notice, then the boiling should suffice.

If it is already drinking water, then chemically nothing needs doing to it as storing water wont affect it chemically. (assuming you are using glass or food safe plastic bottles.)

If you store the water in a cool and dark location this will decrease growth of any contaminants. Additionally the dark will reduce the degradation of plastic bottles.

Not the answer you're looking for? Browse other questions tagged water or ask your own question.

6
How to get rid of tap water taste?

7
Ways to improve shower's water pressure?
10
How to keep water from boiling over?
6
How to get rid of tap water taste?
2
What are the home remedies to reduce hardness of water?
10
How to freeze water more quickly
2
How do you turn water white?