I have boot marks on my legs that won't go away

So I'm in the Navy and have to wear combat boots almost 24/7 which is great and all, except I now have permanent reddish marks about halfway up my calves. They don't hurt or anything but it is rather unsightly whenever I wear shorts or a skirt so I'm just wondering if anyone knows of a way to get rid of this. I'm talking these are not like sock marks that go away after a few hours.

Sounds like your boots don't fit quite right--which can be a problem with uniform boots.Check AAFES and see if there are any other boots (in regs) that are wider at the top of the boot. Women's calves are different than men's and the boots are designed for men.

To "fix" your current boot, get some moleskin and attach the adhesive side on the inside of your boot to provide some padding. Loosen the shoestring at the last two eyes to avoid compression. This should do the job even if you have to blouse your pants.

For the redness: Apply aloe gel several times daily. You can carry a small bottle with you. After about a week, the redness should abate.

It's probably due to your boots scraping your calves because they're too large for you.

I wore combat boots for years because I liked it and one of my pairs of boots looked like that : 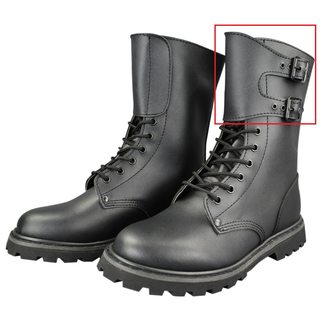 Even with the "red part" tied to the maximum was too wideand was scrapping my calves . I saw it because I'm a man with a high leg pilosity and had "holes" where all the pilosity was gone. It didn't take me too long to realise it was due to the boots scraping on that part of the leg when I was walking.

If your marks are also caused by your boots then stop walking with it the for a certain amout of time ans see if the marks are gone.

Let the marks heal first - turn brownish. Now this is dead skin that you want removed. You can do that with a pumice - after taking a shower when you skin is still soft and moist - it is easier this way. Don't try to remove it all at once - rather a little bit each time.

7
How to get sock marks off legs quickly
1
How would you have a rewarding snack like cookies locked away, and only accessible at a certain time each day?