How can I remove the cork from a wine bottle when I don't have a corkscrew?

How can I remove the cork from a wine bottle, without it falling into the wine, when I don't have a corkscrew?

I'm not talking about flanged corks, or corks that partially protrude from the bottle already, but about normal corks that are placed like this: 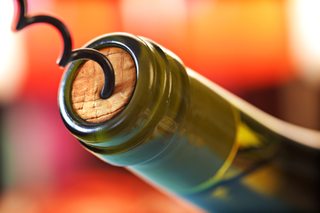 I tried to pull the cork out with my fingers but I couldn't grip it because the cork was flush against the opening of the bottle. What else can I do?

One way to loosen the corkscrew is to remove your shoe, place the bottom of the bottle in the foot hole (to protect the glass), and then bang the shoe against a stone wall repeatedly until the cork eases out of the bottle. This video provides a good demonstration. Just be sure to remove the capsule before trying. 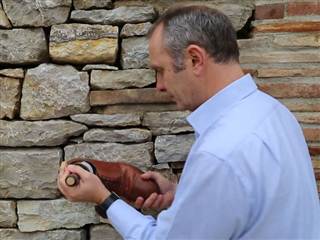 This woman adapted this method using a book instead of a shoe.

You can also remove the cork with a house or car key. Select one of your house keys and insert it into the cork at a 45-degree angle. Keep pushing the key until most of it is inserted into the cork. Then twist the cork around a couple times and pull up as you do, gradually coaxing the cork out of the bottle. 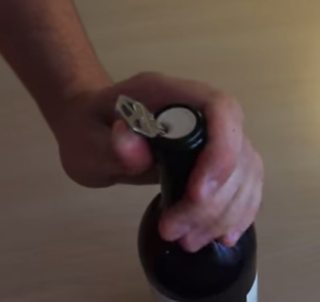 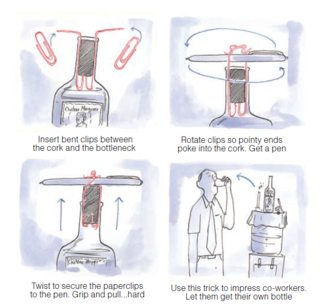 The most accessible solution given the items you're likely to have quick access to involve pushing the cork into the bottle using the blunt end of a knife or spoon etc. 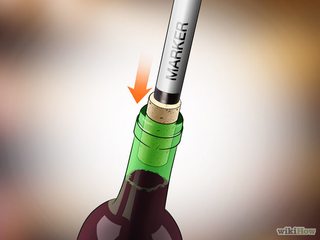 Carefully screwing a screw into the cork will give you something you can grip to pull out the cork. Pliers will be useful. 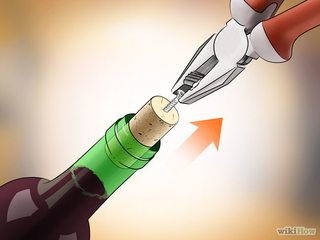 There are more solutions here.

Push it in with your index finger (yeah, press hard!). You need to keep your little finger in the bottle neck to pour the first glass to stop the cork bunging up the hole.

Another alternative would be to use a syringe :

I can personally attest to the key method working. However, it does work much better if you use two keys. You insert each key at the angle shown in James Webster's diagram, but you turn the keys 90deg from the position shown prior to inserting them so that the second key is not prevented from going very far in by the first. Then simply twist the keys around inside of the neck of the bottle as you pull and it will make the removal quite a bit easier in terms of effort. You get a second advantage from this method besides just the obvious one of having the keys angled across from each other giving a better hold inside of the cork though. That advantage is that now the keys are at a MUCH better angle to hold on to while attempting to extricate the cork and is also quite conducive to mentioned rotation of the cork as you lift without hurting your fingers from the pressure on the thin edge of the key(s.)

Another method which is fairly effective is to take a thin flexible blade such as a boning knife (or really, any thin and flexible but strong strip of material, be it metal or plastic) and work it in between the cork and the bottle. You can then use the combination of the compression of the cork from the side with the small gap letting air in as you remove the cork to release the cork from its home inside of the neck of the bottle. This will work even better with two such strips, in fact, there is a type of coke remove that uses this very principle with two such strips of spring steel.

Not the answer you're looking for? Browse other questions tagged kitchen substitute-tool container or ask your own question.

11
How do I fully utilize the pasty sauce on bottle with minimum wastage before discarding the bottle?
6
How do I remove cloudy buildup from putting wine glasses in the dishwasher?
9
How can one remove burned food from the inside of a pot?
19
How to remove smell from a new water bottle?
4
How can you get the first brownie out of the pan without destroying it?
1
How can I remove the bearings from a hard drive motor?
1
How can I remove the smell of egg from my hands?
5
How to keep the water bottles erect in the refrigerator door?