A message from our CEO about the future of Stack Overflow and Stack Exchange. Read now.

how to pull out shaft from pulley of wheel

I want to know if there is any way that I can pull out the old bearing from this bone saw machine. If anyone knows of any tools to be used please do send me a link of it or a photo. 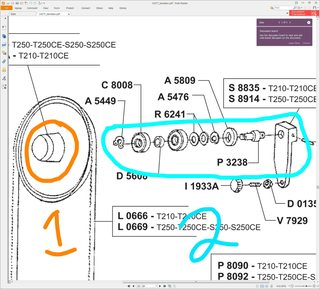 Not exactly a hack, but if you can support the bearing, ideally on the inner race, and press on the shaft (an arbor press is probably enough leverage), the bearing will come off. These bearings are usually a press fit -- meaning the inside of the bearing is a tiny bit smaller than the shaft, so the bearing stretches a little going on.

I fix power tools for a living, and I often use a hammer and punch for this, along with what we call a "bearing splitter" (a screw clamp with a beveled inner edge, also called a bearing clamp), but if you don't have experience (or have too heavy a hand with the hammer) you can wind up expanding the shaft enough from the impacts to make it nearly impossible to get the new bearing on.

Reversing the process, obviously, will put the new bearing onto the shaft -- it won't slip on, because it's smaller, but it will go on with some pressure, as long as it's straight. A film of light oil on the shaft will help.

If you're still at the point of pulling the bearing/shaft assembly out of the pulley, you'll need a way to apply even tension on the bearing shaft, so the bearing will pull out straight (if it cocks, it'll lock in place and the job will get harder). As noted below, if the bearing bore is open, the job is trivial (though I'd recommend an arbor press unless you have experience, because you could destroy the retaining ring and wind up with the shaft out and bearings still in -- there's a way to fix that, too, but it's time consuming and annoying). I'd start with getting a prybar (not a cold chisel) under both sides of the arm that holds the bearing, with the pin still in the hole, and pull against the body of the pulley. If you can pull evenly on both sides, the bearings will likely come out without too much effort.

If the shaft is already out of the bearings, that means you've already applied enough force to destroy the retaining ring without moving the bearings -- which means the wheel is done. Get a new one and quit fighting with it. The only chance you'd have of extracting the bearings in that case is with a slide hammer bearing extractor. Choose a mandrel that just goes into the inner race, slip it in past the bottom bearing, then assemble things (which will expand the mandrel to grip the inner race) and use the slide weight to hammer the bearings out of the pocket. There really is no good substitute for this tool, but there's a jackleg method that works sometimes.

Saturate a piece of paper towel in grease and stuff it into the bearing's inner bore, then drive a close-fitting (but not press fit) shaft into the bore. Continue stuffing greasy toweling and driving it in, and the pressure below the bearing will eventually jack it out of the pocket. This will also work even if there isn't room under the bearing for the mandrel of a slide hammer extractor.

Not the answer you're looking for? Browse other questions tagged substitute-tool energy automation or ask your own question.

6
How to make the lens from my glasses stop falling out?
10
How to measure food without proper measuring equipment?
6
How to moisturize lips on the go?
4
effective catfish bait that stays on the hook without aidel
6
Heat water in two buckets using one immersion rod
9
Make a hacksaw blade suitable for use with food
5
Trick to measure the size of a mattress
1
How can I remove the bearings from a hard drive motor?