Removing a wasp or bee

The majority of the time if you leave a bee or wasp alone, they shouldn't sting.

If a wasp has landed on your upper arm for example, and it looks like it is about to crawl up your tshirt sleeve, you need to get it off you safely, so what is the best aproach?

Hitting and waving your hand around is likely to get you stung, any solutions?

Unless you are coated in sugary stuff bees are utterly uninterested in you. Getting stung is much more likely if you are near their hive, and not so likely when they are in yours.

However, to get rid of them fast: then do not hesitate and swiftly splat them. A sting has to be aimed and the insect does not have time to place its stinger accurately. The risk of getting stung this way seems minimal. Brushing them off got me stung once, splatting them never.

Even better will be the snipping method: slowly approach your fingers already cocked and then kick them off with a short but forceful snip. That will be faster than a bee or wasp can react with stinging.

To illustrate two points about this, this picture seems useful: 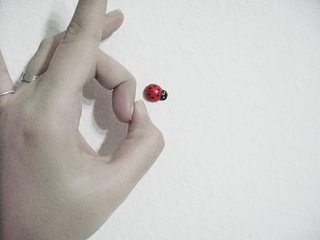 This shows the finger configuration and why you should ultimately not do this to a cute animal, like a ladybug in the picture or like a bee in the question.

Let me repeat: most of the time waiting is the best option.

I usually just put my finger in front of it,then it crawls on,then I put it somewhere else. Sometimes it won't like my finger so I'll use a piece of paper or a leaf or something.

The correct way to deal with wasps or bees is to funnel them out through a window, if possible. If not, don’t get agitated. They absolutely do not care about your existence, as long as you don’t try to harm them.

Flicking a wasp/bee off your arm isn’t superclever. It won’t die, and it will know something harmed it - these animals have advanced eyesight, and see better that you’d expect. It takes several minutes before they calm down.

Wasps are starving in the autumn, but not aggressive. If one is crawling into a sleeve fx, either take a piece of clothing (like a t-shirt), and use it to grab and encapsulate it, or else get a hard object (the bottom of a glass will do) and rapidly crush down on the insect. I usually smash it with a flat palm if I become really annoyed. It will not have time to sting.

This last bit probably merits an explanation... The stinger for both wasps and bees is composed of two ‘daggers’ which move against each other, controlled by at least two muscles. It takes the insect a moment to prepare injecting poison.

Before you blow, stop and admire its little legs and antennae, the compound eyes and the fuzzy stripes, the shimmering wings. Beautiful creatures.

0
How to keep away Wasp, hornet, tanboori away
2
removing/disabling LED lights in kids shoes