Need help parking my truck at an angle in my three car garage, without hitting my wife’s sedan. I have an HD 2500 with a headache rack that only fits in the garage at an angle with my wife’s car in the third bay. My truck is too wide for that bay. It needs to be in the garage during winter. It fits but I need something to warn me of her car and the wall on my driver's side where the garage is more shallow. Tennis balls won’t work because I can’t see my wife’s sedan when I start to pull in the garage. I need to know where I’m at and when I’m in. Ideas? The truck does fit but I have to get out and constantly check my space while parking. I cannot drill stops on the floor because I do not own this house. Thanks. I’m using her account.

Buy or find a heavy dumb-bell (weightlifting equipment) and place it on the floor as a tire stop (so your tire rollsinto the handel). You could also use 45lb weight plates to make drive-between guards... so two spaced to let your tire pass between if you are in the right place. You’ll feel the plates in the steering if you are to one side.

Craig Constantine suggested drive-between guards made of free weights. Another drive-between idea is long 2x4 boards, with other wooden blocks nailed on top of them every couple of feet. The boards would provide a "channel" for your truck, and the larger blocks (maybe a 4x4 post sawed into 6" sections?) would provide bumps that you could feel as you are driving in.

You're trying to solve a problem you shouldn't have in the first place.

You're trying to straighten out after you're already half way in the garage, like this, and ending up hitting your wife's car, and maybe the garage door sides too, like this: 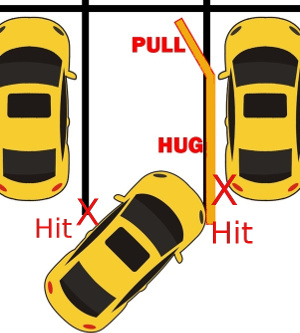 Instead, just straighten out before entering the garage, so you'll drive straight in with no chance of hitting anything on either side.

Or, if for some reason it's impossible to straighten out first, you can still use tennis balls, but taped from the ceiling hanging in a curtain just along side / in front of your wife's car. Then you can see & bump into the tennis ball curtain just before you would hit the actual car.

Just a couple tennis balls (or anything that won't scratch & is heavy enough not to blow around) would work, or you could go crazy with tennis balls like in this image: 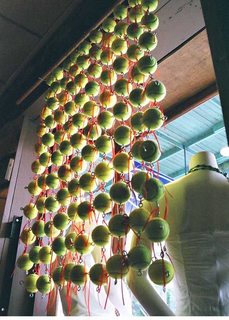 I created a figure of your situation and I guess it is correct. Anyway, my solution is given below: 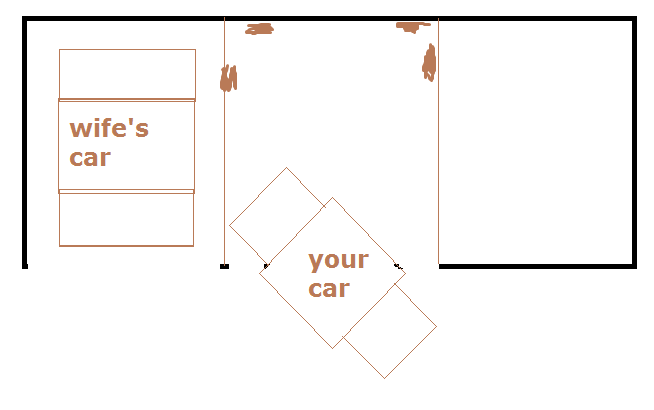 Having a parking sensor is the ultimate solution, even then finding out hack in my logic is, using balloons.If you don't have to invest some money in the sensor, I would suggest you go for this:

Another solution is to use markings of paint on ground.Perform this when you are free as this will take some more time.

The point is to take half of your car at 45 degree angle and once half is in, turn you tires to max and move ahead.However, while reading some random article which gave a tip that you may correct your wheel alignment to ensure better accuracy

13
How to stop snow from sticking to the shovel
14
How do I ensure my car wheels are straight when parking before getting out?
79
How do I stop cars from tailgating?
21
Stop car doors from slamming against wall inside my garage
28
How can I stop my wipers from squeaking?
11
How do I stop/discourage people from stealing from my car?
8
How to signal a person driving behind you to stop texting?
9
Some everyday item to wedge my car window shut (stop it from slipping)
5
How can I effectively determine the distance to the car in front of me when parallel parking?