How can I remove the bearings from a hard drive motor?

I've dismantled many hard drives and harvested the magnets from them. I've also removed the bearings from the arm which reads the platters. I've been told and seen on youtube that it should be possible to remove the bearings from inside the motor casing. (I've already removed the motors from the hard drive casing). Suggested methods include hammering the pin from below and drilling out the screws but the motor casings seem to be welded or machine pressed in some way and neither of these methods have worked for me.

I have searched extensively on forums, googled etc so am not looking for links but hoping to hear from someone who has actually done this.

The reason for removing the bearings is so that I can use them on various hacking projects and for making my own tools. One example would be a blade guard on a jigsaw table. 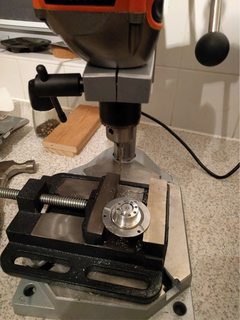 If you are willing to go through some sacrifice (if you are lucky, only once), you can just cut the thing (render it useless) and see how it is built / assembled / welded, where are the useful details / parts, where there is useless stuff which can be destroyed without remorse...

It will give you insight and knowledge about how to proceed in the future.