My iphone chargers aren’t working and have a black spot 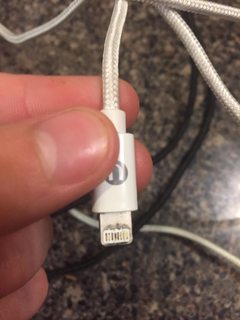 I have maybe 20 cords that are like this because they would stop working and i would... lick them... to fix them! But after that they break and are like this! Ive tried tons of common ways to fix this like soaking them in vinegar, using rubbing alcohol, and using a pencil eraser! But nothing i try works! Please tell me a way to fix this!

How to lick your Problem

One thing led to another.

First, some terminology
What you are holding is an Apple Lightning™ connector.
Each little line on the end of the connector is a pin which connects a specific corresponding terminal in the Apple iPhone jack to a USB Power Adapter (the smooth white "lump-of-soap" that you actually plug into the wall power receptacle).

Second, some electrical theory
The pins themselves don't work (probably) because they appear to be corroded.
Moisture (your spit, or any liquid you may commonly find) conducts electricity. That explains why licking the connector tip "worked." Most any liquid would have "worked."
BUT…
Pins must be completely dry or they will form a connection with the incorrect terminal in the receptacle. This causes a "short-circuit."

Counting from the left, pin #1 is the ground and pin #5 is the power. Normally, a short-circuit involving power causes heat which may explain the plastic around the pins becoming darkened—some combustion has already occurred.

Third, some logic
When something unwanted happens and two parts are involved, repeatedly looking at only one as the cause of the issue is not productive. Here, one part is the USB to Lightning cable connector and the second is the iPhone jack itself.

Fourth, a warning.
Whatever else you do, if it involves using a liquid, allow the parts to completely dry before you plug-in anything that involves electricity.

A cellphone has enough electricity to explode and burn. The USB Power Adapter is connected to the power supply in your building hundreds of times more powerful than your cellphone.

That there was insufficient combustion for a fire is reason for thanks.

Please don't use the cords after they start to look like that. The outside black spot isn't the problem, it's whatever damage might have happened to the internals. A damaged charger can damage your phone, and it's not worth saving a few bucks on a new charger if it's going to ruin your phone.

Not the answer you're looking for? Browse other questions tagged cleaning or ask your own question.

17
What is a permanent solution for black mold?
8
How to remove ink from paper?
7
Any idea how to remove this build-up from glass shower door?
1
How to clean the charging port of iPhone 6?
1
How to stop a commercially manufactured garment’s dye from bleeding out?
1
How to prevent my silver jewelry from turning black?
0
How To Remove Black Tea Stain from Carpet