My MP3 player just broke :/ But that's not what I'm asking about. Tomorrow I'm going back home from college. I have a good many CDs that I can listen to on the way home, but they are in a case similar to the following, but the cover for each CD is opaque (don't ask me why - poor design). 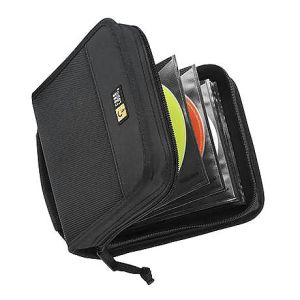 This makes it very hard for me to see which CDs are where, requiring that I slide the CD out for each one before I can see what the CD is. But, since I'm driving, this is more distracting and time consuming than I'd like.

Thinking about how I could remedy this, I thought about the CD holders made specifically for cars. But, as I doubt I'll use it past tomorrow driving home, I'd rather not spend the $10 or so to get one and spend the effort to go to the store. I don't have any transparent CD cases or anything similar lying around as CDs are quite outdated. 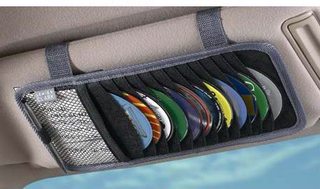 Is there any way I can make something similar to the above product with the things around my house? It doesn't necessarily have to be hanging, I'd just like it to hold the CDs so they don't shift around, be accessible to me while driving, and be visible so I can tell which one is which.

Use your current cd holder, but put a strip of masking tape on each page. Use a marker to write the title of the cd on each strip of tape.

Another trick would be to put the cd's in order. Before you leave, put them in the order you want to play them, from the front to the back of the case.

Here are some plans I wanted to try: 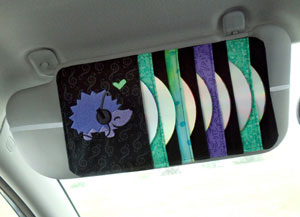 Its basically where you sew pockets onto a board that is covered with cloth. The board can be made of cardboard or another light weight hard object. I planned to modify this pattern to hang on the back of the seat, though. 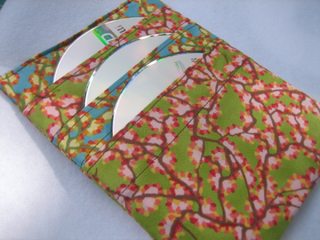 This plan takes a lot of sewing. It is mostly sewed together pockets, but you may be able to avoid this by taking large pockets from other pieces of clothing and adhering them together, by adding elastic bands on the back you should be able to create a design that is similar to the one above.

Using Duct tape or cloth glue for the steps should work. Other things that will work for creating pockets:

odee.com: Not helpful, but really cool.

Not the answer you're looking for? Browse other questions tagged technology car travel container organization or ask your own question.

10
What is a good makeshift coin holder or organizer?
114
How can I figure out which side of the car the gas hatch is on (without getting out)?
8
How to store cans in a cupboard
4
Removing / Minimizing a car dent?
2
Creating a stylus holder that attaches to tablet via full sized USB
3
Storing bags while in the city
1
HDMI screen receiving interference from old wall heater
1
Is there any way to fix these keys?