How can I quickly remove water from my shower curtain?

After I shower, I like to squeegee water off the shower tiles so mold doesn't grow on the grout. I'd like to get most of the water off my plastic shower curtain too, but I need a life hack to accomplish that. 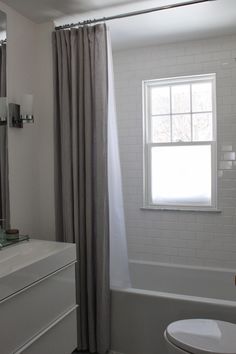 Also like the picture, we have a combination shower / tub, so the curtains hang over the side of the tub. The ends of the curtain rod are not in fixtures; they just press against the walls at the ends of the tub, so if I pull down on it, it will fall.

You might not need to go to such labour intensive lengths to remove water vapour in your bath.

After your shower, rather than gather the curtain and curtain-liner at one side of the rod, slide them toward the centre — arranged so that they are hanging both away from the tiles… and so that air can freely circulate around the area.

I agree with @Stan that allowing it to dry naturally is the easiest way, but I've recently started using a window vacuum to dry the floor and walls of my shower and I've been extremely impressed with how well it removes the water.

I'll admit that using it on a shower curtain is slightly more of a challenge, but it might be worth a try, it's quite a handy gadget to have around the house anyway, for window cleaning and liquid spills.

They say that the big breakthrough in the vacuum cleaner was when someone said, "It should suck, not blow". Well it occurred to me the other day that for cleaning the shower, "it should blow, not suck". Like a Dyson airblade, it should produce a thin "blade" of air to push the water into the drain. This would certainly work better on your curtain than a vacuum I would think. So, if you have the wherewithal, perhaps you should try to "reverse the polarity" on a window vacuum and see if you can't make yourself your first million!

The problem with using 1 squeegee is that you don't have anything on the other side of the floppy material.

Try using 2 squeegees, one in front and the other behind the curtain, pressing against each other.

First, bunch up the curtain hooks: keep the vertical fall the same, but push the sides together.

Then holding one squeegee on the inside of the bath and the other on the outside, squeegee a vertical length of the far end. Once you've done that section, pull it away from you to expose the next section. Rinse (metaphorically :P) and repeat.

Be careful with the wet, slippery and curved surfaces.

Your comments suggest concerns that are not covered in your original question (mold/formed water droplets). Both (or either) parts of this answer addresses your specific objections to other answers in your expressed comments.

There are two possible means to accomplish your concern. Both have to do with preventing droplets from forming rather than removing them after they have formed.

Droplets form on smooth non-pourous surfaces due to a property of liquid surfaces referred to as surface tension. It describes the tendency of a fluid surface to have the least surface area possible in relation to volume. That's why droplets are round.

Chemical Solution - A weak detergent is sufficient to neutralize water molecules adhesion. By applying a thin film of the proper strength of this will prevent droplets from forming. A liquid called Photo-Flo™ when diluted 1/200 is used in photography to prevent any droplets from forming on photographic film after a thorough final water rinse before drying. A couple of drops of this in a small aerosol pump bottle can be sprayed on your shower curtain liner either before or after your shower. It can be re-applied after it rinses free. It should last for a couple of showers, at least. Apply it where and when you wish. Water droplet will "sheet" before forming droplets. Sheeting will allow the water to fall to the bottom of the liner and into the tub to drain free. It can be considered similar to soap but it has no additives to produce the soap scum normally associated with bath soap. It is transparent and colourless. You can rinse it completely free if you want to but you should conserve it for your desired effect.

Physical Solution - A second (my preferred) technique uses the concept of capillary effect (wicking) by using a shower curtain liner which is porous (such as fabric) rather than a non-pourous one of plastic. Water droplets will be absorbed by the fabric by capillary action before surface tension allows water to coalesce on the surface as it can with plastic shower curtain liners. Fabric liners still prevent splashes from getting through the tightly woven material and the water will be evaporated as the liner dries preventing mold or mildew from forming. (Multi-star hotels where I've stayed have had fabric shower curtains although I'm not certain if the reason is similar.)

Good luck. Everyone is entitled to their own foibles - I certainly have my fair share.

If the walls have tiles you can remove the shower curtain and place a towel on the bathroom floor to catch the spray. After the shower, step on the towel and dry yourself. Then put socks on to avoid transferring water from the bathroom to other rooms. Finally wring the towel and use it to dry the wet spots wherever they are. Get rid of the socks when you are outside the bathroom, they have no other purpose than keeping your feet dry.

Over time you will learn how to position your body during the shower to minimize spatter.

5
How to remove water spots?
6
How do I stop the ends of curtain poles (finials) falling off without making a hole in them?
11
How do I place/anchor showerhead at a low height, without drilling the wall?
3
How can I keep the interior of my car dry while driving in the rain?
5
How to effectively prevent the shower curtain from snuggling?
1
How to reduce intensity of air flow from my window AC unit
0
How to make my bathtub slippery
1
Clean sticky dust from bathroom tiles
1
Soak for shower curtain liner to remove soap/lime buildup