How to shade bubbles well on optical answer sheets

I constantly have exams that require to shade bubbles on an optical answer sheet. Usually I will shade it with a 0.5 (2B) lead mechanical pencil. I think I shade quite hard sometimes(not sure if the pressure matters), then when I try to erase my choices on the bubble, I realise there are still some remains on it (about 50% of its previous darkness) on the bubble, and I do not know if the machine will still detect that previous bubble as filled and be unable to conclude my final option.

Is there a way to get a good way to do exams related to these? Like getting a good eraser from a certain brand or making sure my eraser can lead to a cleaner erasing job?

A technique that I use that may help. I use a two-step approach.

No problem with the questions I know. I answer them and move on.

I answer the questions with a small, light "x" mark in the answer bubble if I have any question about the answer being the correct one. It's dark enough for me to see it easily.

Near the end of the exam, I review the lightly-marked answers and darken them in after I'm sure of my response.

This GREATLY REDUCES the need to use much time and effort to change a questionable answer.

Pencils have a lead core made with different proportions of two materials to make different kinds of marks on a material.

One material is clay to hold the shape of the marking pigment and the second is graphite which is the black pigment that makes the visible mark.

Pencils come in a range from hardest to softest starting with 5H, then progressively 4H, 3H, 2H, HB, 2B, 3B, 4B, 5B getting progressively darker with more graphite (very soft stuff). Some expensive sets have a range from 7H to 7B. They can be bought independently and you can also buy leads in grades to fit lead holders and mechanical pencils. Avoid putting soft leads in cheap mechanical "clutch" pencils as they will crumble in the pencil works.

You want to avoid hard pencils that will scratch the paper and need more pressure than a softer, darker one.

You must also not press too hard with a soft pencil or you will have too much graphite which will smudge and be difficult to clean up if you make an error.

A hard eraser will damage the paper. A soft white plastic one will be kinder to the paper but needs to be clean to work. The soft lead will dirty the eraser so that you must be sure to only use the clean part of the eraser to avoid smudging.

Using an eraser effectively is another issue. Start to one-side of the part to be erased instead of putting it into the middle of the error. Work from a clean area into the dirty part gradually removing the mistake as you work across it. Be sure your eraser is clean or it won't remove the graphite mark.

The thickness of the pencil is less of an issue than the hardness. A 0.5 is only 0.2mm thinner than the 0.7 so the mark will be thinner and require less effort to make the same dark line. The force is concentrated into a smaller area of the tip which increases the pressure. Some prefer a wide stroke and some a narrow one. That's a personal preference.

White plastic erasers work best with dark leads. Some (with colours and grey) have fibres embedded in them to abrade (scratch) the surface to better remove ink and other more permanent pigments that sit on the surface of coated (they look shiny or have a slight gloss) paper. stocks.

Short answer: Use a soft lead so you don't need much pressure and a white eraser to remove mistakes.

Try ticker (0.7) and softer lead (2B), and the blue part of the eraser. Don't apply too much pressure when using the pencil and try not to perforate the paper with the eraser. 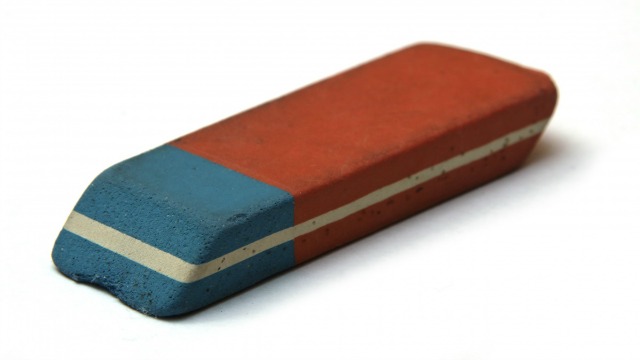 Not the answer you're looking for? Browse other questions tagged efficiency work or ask your own question.

32
How can I eat my bagel when I lack a knife to cut it?
7
How to prevent feet from getting sore after standing all day long
1
How to set up a reminder for something of which I don't know when its going to happen?
1
How to remember not to leave my USB key at the seminar room?
1
How to quickly switch between typing and drawing?
1
How to quickly cure the neck and back pain while studying?
1
How to reduce accidentally pressing the right-button on a trackball?