Identify which USB device corresponds to which USB plug

The back of my computer has 5 or 6 different USB devices connected to it, among a mess of other cables. One or two of these I can identify, since the plugs are rather distinct. But most plugs I can't really tell apart.

What's a good way to make the plugs better identifiable when looking just at the back of the computer (i.e. the Motherboard's USB sockets)?

Maybe color coded tapes would help? I mean that you could put a small red tape on one end of the cable, and the same color on the other end. I'm not sure which kind of devices you have attached to your computer, but maybe you could pick a color which somehow corresponds to that specific device.

Obtain a continuous-tape style label printer and print the name of the device served, plus an equal number of spaces, on a label. Peel the label, stick it on the wire at the "half way along the label" and wrap it round, sticking the label back to itself

Identify a section of the plug where wiring will not be present, and use a craft/exacto knife to cut small V shaped notches in the edge of the plug - different notches for different devices; has the advantage that it won't rub off or fall off like other methods. Will require something on the other end, like a written number of the notch count, to associate device with plug

Use heat shrink of differing colors to establish a pattern at the plug and peripheral end of the wire - you probably won't find heat-shrink that will fit over a plug but shrink enough to form a tight grip on the wire, so leave part of the heat-shrink on the plug and shrink it to a tight fit on the plug

Replace the USB cables with cables of different colors

USB plugs are typically all different thanks to different manufacturers - if you're still using the various USB cables that came with each device and they are all slightly different physically, a hand drawn legend, stuck to the case, of what each plug looks like and what it serves may suffice

Or, as clarified from your comments - you seem to only have an occasional need to disconnect these cables, when you open the case of your PC. I can't imagine that this will happen more than a few times a year, and some cables aren't long enough to allow them to remain connected. Pull the case out slowly, disconnecting cables as they pull tight. Upon re-installation, plug the dangling USB ends in anywhere where they'll fit - USB devices aren't fussy about the port they came out of/go back into so just plug whatever wherever

An exception to this is if you have a mix of USB port types - typically blue are superspeed/USB3, black are normal USB 2 and yellow are high power (good for charging or running hubs) ports. Rather than coding your cables for what device is served, you should consider coding them for what speed/power the device requires. It's likely that USB 3 cables (high speed) will already have a blue plastic part inside the metal shroud and an SS indicator on the plug: 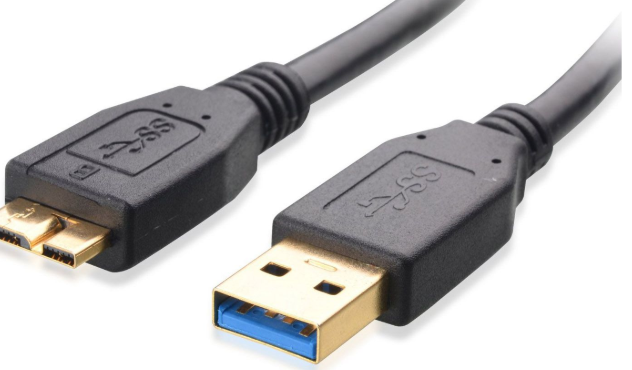 These should be connected to a blue or SS marked port

It is unlikely that a device will have a yellow plug if it should be connected to a yellow port because the USB spec is quite strict about the power delivery capability and hence devices have to comply with it. As such, high power ports shouldn't be needed, but are advantageous to have for devices that don't play by the rules, or that can make use of higher power when available (phones etc may charge faster on high power ports)

Connect things that need charging, or hubs that will have multiple devices hanging off them (and not necessarily any external power supply), or devices that feature a motor (like non-SSD portable hard disks) to high power ports. If you see notifications like "this device has malfunctioned and windows does not recognize it", it may work in a higher power port, or a back-of-case port rather than a front-of-case port (front of case ports run off extension cables that can cause problems with higher power requirement devices)

Similar to Glorfindel's answer of colored tape on both ends of a cord, you could add white tape with the name of the device. For example, you can write "printer" on tape at both ends of that cord. One advantage over color-coded tape is that you can look at just ONE end of the cord to know what it's for (the printer, for example). With colored tape, you need to look at the end plugged into the device to find out which device that is, and then look at the end in your computer to find that same color tape.

Not the answer you're looking for? Browse other questions tagged technology cables or ask your own question.

18
How can I make sure I get the USB plug in the right way up?
7
How can I keep my desktop computer's cables neat?
2
Fixing a micro usb socket.
2
How to fix earphone ear plug which has rough edges?
16
removing corrosion on the contacts of an Apple USB-to-Lightning cable
5
Hacky way to keep micro USB firmly in place?
4
How can I keep a USB mini 2.0 (or other) cable from tearing?
1
Organise cables which often need to be replugged on the wall
1
How to turn a rotated cable back to the right orientation?
4
How to reinforce or protect USB-C cable from connector damage