I lost my closet key, how to open it?

I lost the key to a closet and I need to open it. I don't need for the lock to remain operative after the operation, so I accept "radical" solutions.

The key is of this type: 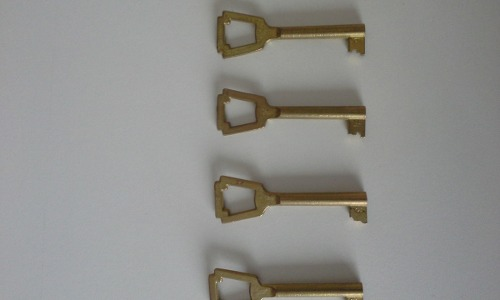 I have no experience of, nor tools for lockpicking. Any ideas?

Edit: I was not able to open it yet. I am adding pictures of the actual door and lock: 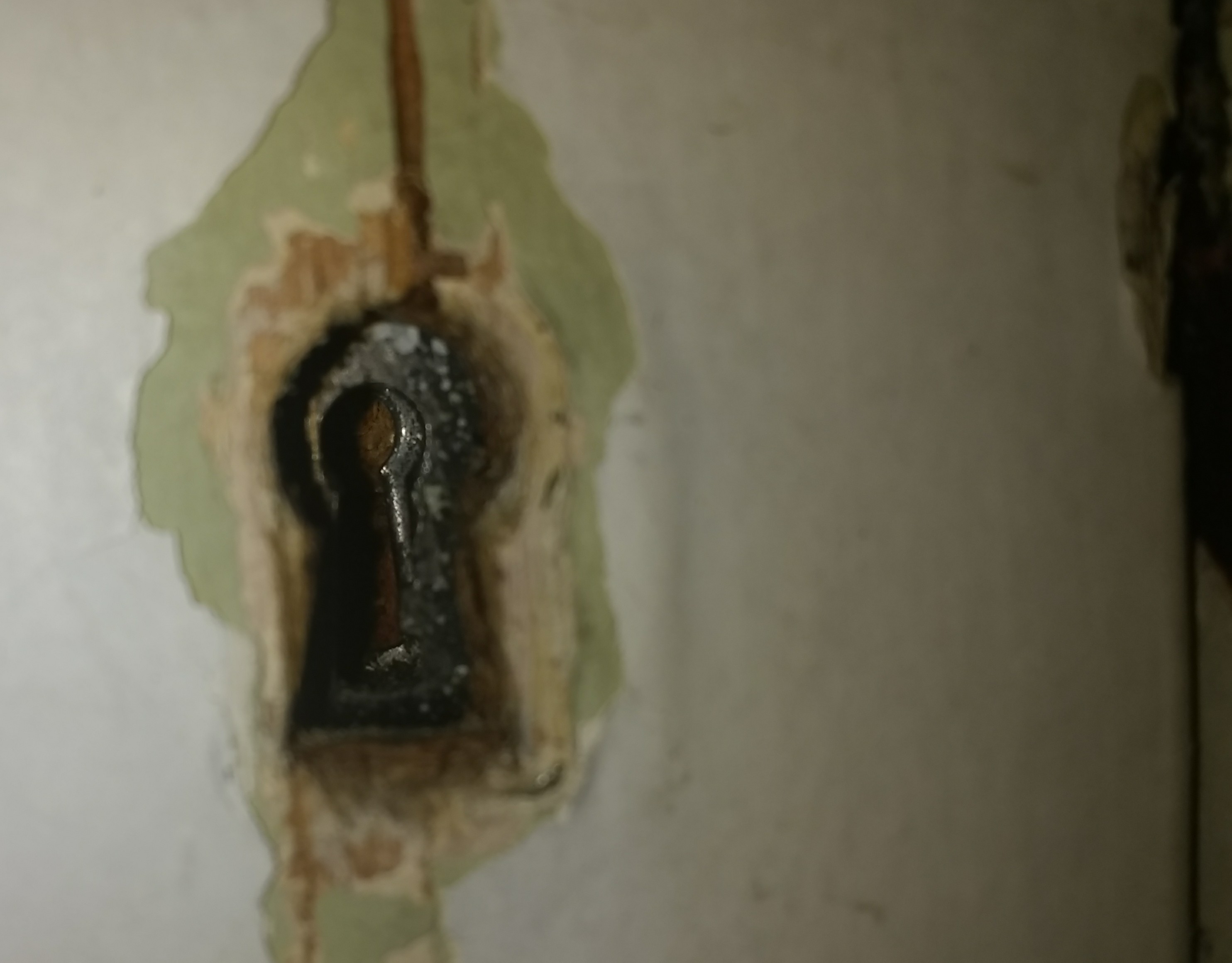 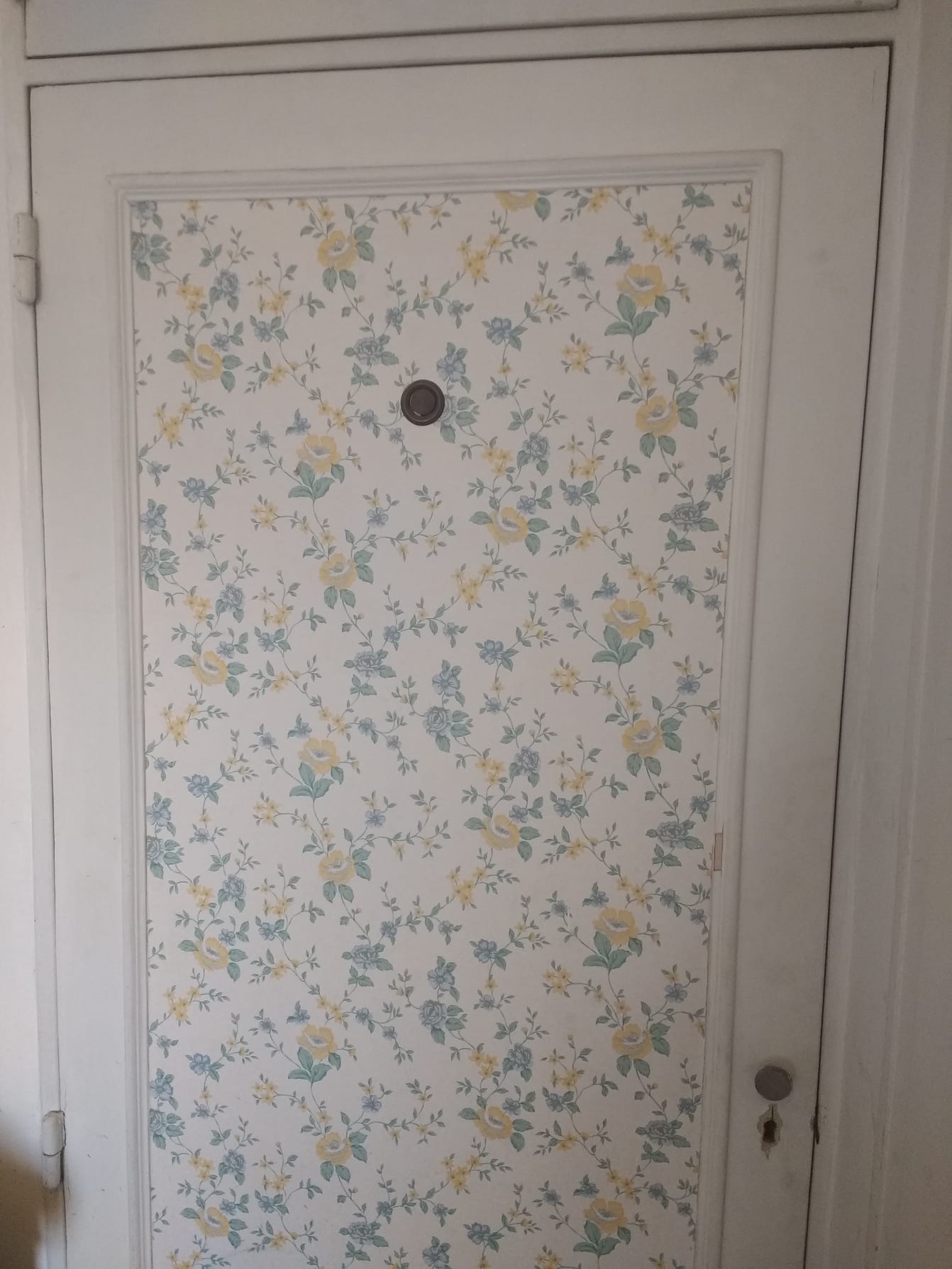 Very few if any closets open inward -- which means the hinges will have their pins on the accessible side. Just drive the pins out of the hinges, and the entire door can be pulled out of the frame (and easily put back once the lock is either opened, replaced, or the key found and duplicated).

If the pins are peened in place, a tool like a Dremel could be used to cut one head off so the pin can be removed.

A warded lock has structures within the lock, called warding, which are designed to fit in notches carved into the key. A quality warded lock will be constructed so that the only way for a key to reach the mechanism is for it to snake around some complicated warding, but many cheaper warded locks can be opened with a skeleton key, which is a key blank that is filed down to remove everything except one or two simple projections or pairs of projections that will operate the mechanism. The way to defeat a quality warded lock is to construct a key by starting with a suitable key blank, covering it with soot or similar material, attempting to open the lock, moving the key back and forth a little at the place it is blocked, carefully removing it, and looking for markings in the soot. Cut, file, or otherwise remove the parts of the key where the soot was marked by the warding and try again. Either the lock will open, or new markings will appear, which again need to be removed. This process can sometimes be slow and tedious, but one will end up with a usable key, greatly increasing the value of the lock to a collector.

Lever locks have one or more levers that must be lifted to the correct height to allow the bolt to move. Lever locks will often have a different feel from warded locks, since warded locks will usually block the key before it has a chance to engage the mechanism, while lever locks will allow the key to engage the mechanism but will block the mechanism from moving fully unless the levers are lifted to the correct height. Many lever locks can be picked relatively easily with the proper tools, but picking would require using a pair of tools, with one being used to try to operate the mechanism which is blocked by the levers, while the other tool is used to try lifting the levers. Often, there will initially be one lever blocking the bolt; once that lever is moved to the right position (i.e. "set"), the bolt will be able to move a little bit before being blocked by another lever. If the bolt is kept under tension, this will rather conveniently hold the first lever in place while the picker focuses attention on the next lever that needs to be set.

The best locks combine these two approaches, requiring intricately-cut keys which need to move several different levers simultaneously by relatively precise amounts. Such locks are much more expensive to manufacture than current designs. Although they may be as secure or even more so than most recent locks, the additional security they offer is not sufficient to justify their cost.

I would not expect a closet door to have a particularly high-quality lock. If the lock uses warding to distinguish correct and incorrect keys, picking with crude tools may be easy. If it uses levers for that purpose, picking will require the simultaneous use of two tools that are designed to work together. There are many youtube videos and web tutorials that would explain how to make the required tools. If you can find some old keys that look like they would fit, I would suggest trying them and seeing what happens. If the key is blocked by something in the lock without engaging a mechanism, you probably have a warded lock. If the key engages the mechanism but the mechanism itself feels blocked, it's probably a lever lock.

I should suggest trying a bobbypin or a smaller flathead screwdriver if you'd like to save it. From my experience, these types of locks are very easily opened, even with almost no skill in lockpicking. After all, you might find the key again.

Another option could be to drill out the center of the lock, therein making it very easy to open the door. This would, of course, entirely destroy the lock, but you have already said this is not an issue.

The original image of the key is interesting to me. You could just wander into the local locksmith and ask if they have a set of keys that might fit. There's a limited number of variants on these keys and you may just be able to buy one off the shelf as the lock is only a token gesture towards security.

If you're not overly attached to the lock, there's the question of how firmly it's attached. many cabinet locks are lightly attached to the inside of the door and if you attach a decent handle to the outside you could possibly just force it open. Though the hinges are quite heavy duty which implies a more solid door and lock mechanism.

Other suggested methods of removing the hinge pins or picking the locks are good.

Well, if you don't care about locking it again, I'd find my trusty old Fein multimaster cutter and just cut the lock open. Or if you want the gentle solution use a small hacksaw blade.

Use a punch and hammer. Insert the punch where the key would go...use the hammer to drive the lock mechanism off the back of the door. A couple of good whacks and you should be wide open. Shame to bust it though..I would try the bobby pin method first.

Is that a skylight window above the door? Perhaps you can gain access through it.

I am not suggesting climbing in through the window -- that's probably not practical. But perhaps you can open it, and then with possibly reach through it with a stick or belt, open the lock from the inside.

I am assuming the door has an inside lock latch (for safety) which you might be able to toggle with a broomstick.

If such a latch is 'down' and you need to pull it 'up', a 1" eye-hook screwed into end of stick might give you the purchase you need to pull up on the latch. (You might need to screw the eye-hook in at 45degree angle on stick.)

A knob would be much harder to turn, but perhaps you could buckle a couple of belts together into a 3-4' diameter loop which you dangle down from the skylight, perhaps with some resin on one of them to make it 'sticky', loop one end around the knob as if it was a pulley, then attempt to turn it.

Several things in your favor with this door:

Options, in no particular order:

Open the back side of the cabinet :)

You could have a mold of the Lock made, then have a skeleton key filed to match the Lock. If that does not solve the issue. You would want to locate additional information about the door, then determine if it will be possible to remove Door from Hinges and then resolving the issue with the lock and key at a later date.

Not the answer you're looking for? Browse other questions tagged home substitute-tool locks or ask your own question.

18
Open a suitcase with a numeric lock when you forgot the key code
8
How to open a frozen padlock
4
How to open a privacy lock doorknob without the key?
3
Cable lock with lost key
3
How can I keep the interior of my car dry while driving in the rain?
3
How to open a lock if key broke into the lock?
1
Broken Key in Safe Lock
0
How to easily and cheaply erase a key fob?