It is very difficult to iron the clothes

It is very difficult to iron my clothes. This is my iron.

Whenever I use the iron, the cloth sticks to it, what should I do? 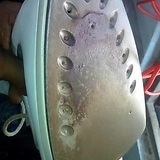 I hate to be the bearer of bad news, but with what an electric iron costs these days, the first thing to try is buying another one and not abusing it in the way this one has apparently been abused.

I see some foreign material (melted synthetic fabric?) stuck on the sole plate, and further, about half of the steam vents are clogged with something (can't be sure from the photo whether it's scale from hard water, or more of whatever is stuck on the plate).

Either way, there's also apparently damage to the non-stick coating around the steam vents, and there will almost certainly be more before you can remove the stuck-on material -- and then the steam system still won't work as it should.

A new iron costs (last I checked, in the USA) around $20 for a full-feature steam type -- if your time is worth anything, you'd be far ahead to just buy one and throw that one into the trash or recycling.

I'm gonna start by telling you a way to clean this. Plug in the iron and rub a paracetamol tablet on its ironing surface whilst it is hot. This would melt the sticky substance altogether and you could now wipe it off with a tissue or something. This always works for me but please be careful!!

Concerning how to prevent this in the first place, I think the heat for whatever fabric type should always be set to the appropriate mark. Every type of fabric has the appropriate temperature it should be set to so check your iron. This prevents burning. If you feel the iron is too hot also, please reduce the temperature.

Also keep the iron standing when you are temporally not ironing (for example when adjusting or folding your clothes). This prevents the burning of any surface it might be placed on.

I hope this helps.

If you can’t replace it Then Clean your iron.
It has burns on the plate because you’re using it too hot and not keeping it topped up with water.
Do not use an abrasive cloth as it will scratch the plate making it is less.
Don’t use on clothes with vinyl printing or nylon which can melt.

Not the answer you're looking for? Browse other questions tagged clothing or ask your own question.

10
What's a better way to put clothes in a drawer?
11
How to stop leather from making stain on clothes with light colors
6
How to remove / prevent burns on a shirt from an iron?
5
How to iron clothes at high temperature setting?
1
How to remove sticky color from iron box
1
How to label clothes?
3
How to clean my iron so that it won't leave brown spots on my clothes?
0
How can I quickly remove tea stain from clothes
1
How to protect trouser/clothes from semen?