How to Pack Dress Shirts / Clothes for Travel

Of course around the holidays, lots of people travel.

I'm looking for an efficient way to pack my dress shirts so they won't wrinkle and look like a mess when I get them out later. And since I'd like to bring a small bag instead of a suitcase, I want to pack 4-5 shirts in as small a space as possible.

In particular, I'd like not just anecdotes, but comparisons - rolling vs. folding, etc.

In the past, I've used an Eagle Creek shirt folder. You fold up the shirts, then the flaps hold things together and compress a bit. I'm curious about other solutions, since I often end up with a bit of a crease. (Or, alternatively, if you know a way to fold all the shirts that won't get creased.. I'll be thrilled.)

I have tried both "normal" folding and rolling, and haven't found either of them to be that great at avoiding crumples.

The problem with normal folding (e.g. folding your top in four by folding in half vertically and horizontally) is that you end up with quite a big "square" of shirt/T-shirt afterwards, which is very susceptible to crumpling unless it is kept perfectly flat. Even just having a not-quite-jam-packed case can be enough to let the clothing move around and then get crumpled.

The problem with rolling, though, is that the end that you start the roll on can end up quite crumpled because it's wound quite tightly. Especially if you've got something crumpleable like linen, or a dress shirt. You can mitigate this by going very slowly and carefully, but I find it tedious.

Here's a method that I've found to work much better for me. It's almost a cross between rolling and folding. I'll show you how to do it with a T-shirt first, then discuss how to adapt it to shirts in a minute. 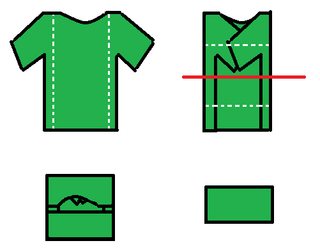 First fold both sides in to make a narrower garment. Then fold the top and bottom in to the middle. I usually allow a little space to give it "room to bend" when you make the final fold. Then simply fold those two halves together and you end up with a very nice compact garment that stacks nicely with other clothing in your bag or case. It's almost a little "brick" of clothing.

For a shirt or a long-sleeved top, you have to deal with the sleeves after folding the sides in. Just fold them down parallel to the edges of the shirt: 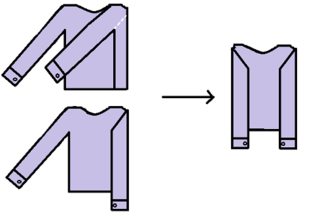 (viewed from the back of the shirt)

Then continue as before.

Personally I find this gives me the benefits of rolling without the downside of "start of the roll is actually lots and lots of little folds". In particular, with shirts, a lot of the early folds are along the seams of the shirt, where they are less noticeable, and then the later folds are around several layers of fabric, so the folds are less sharp.

What I use is rolling it. This way is good for t-shirts, but how it affects dress shirts depends on the methods. I usually take the shirt and fold the sleeves onto the midline of the shirt and then take the rectangle and fold it again, then I roll.

The video method is a little different than my method. Folding in any fashion leaves creases everywhere, compared to this method. A tip is to place wrapping paper or other paper(even plastic) onto the fabric before you fold. This stops the fabric from sticking together and can combat creasing.

Something that will help

What really determines the amount of wrinkling?

The fabric type and weave of the shirt.

How long your clothing is packed.

How tightly your clothing is packed (less in the luggage the better!).

Using a trusted brand of starch and storing for only a little while works the best alongside these methods.

Since I discovered them, I always use "Vacuum Storage Bags" for travelling.

You basically normally fold your clothes, put them in the bag, and expel the air inside (by pressing the bag or using a vacuum device). Your clothes will stay folded in a compact way even if you move around the bags in your suitcase. No more wrinkles should appear. The clothes will also take less room than if not using the bags, and it will be easier to organize the space in your suitcase.

With several bags you can "sort" your clothes: one bag for underwear, one for shirts, etc. You can also separate them by owner, if you share your suitcase with a family member for example when travelling.

Not the answer you're looking for? Browse other questions tagged clothing travel storage or ask your own question.

6
How do I avoid wrinkles in dress pants placed on a hanger?
8
How to fold clothes to save packing space for travel?
6
How to look / dress older?
1
How should I store clothes to prevent animal damage and smell?
6
How to keep shirts white?
0
How to effectively remove cat hair from clothes (e.g. T-shirts) of thin cotton?
2
How can I dry my clothes quickly after rain?
2
How can I pack a printer in checked baggage?
5
Fold hack for tons of washed clothes