At what part of the toilet should I aim to reduce the pee splashing? [closed]

Want to improve this question? Update the question so it can be answered with facts and citations by editing this post.

The question has been closed under the claim that is opinion-based. Please read my comment below explaining why I think it should be reopened.

While peeing stand up I wonder where should I aim to minimize the amount of little drops splash out. Some alternatives: 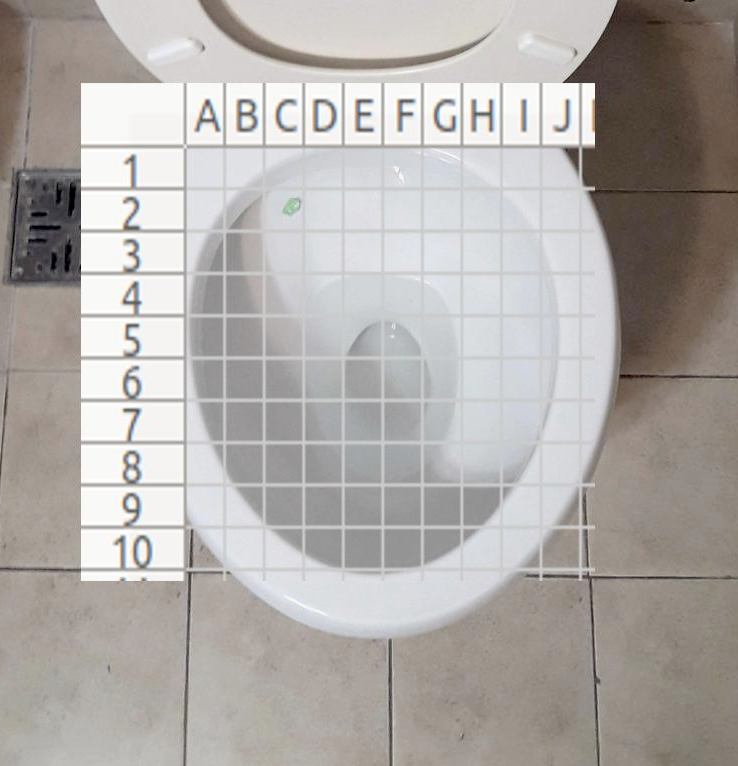 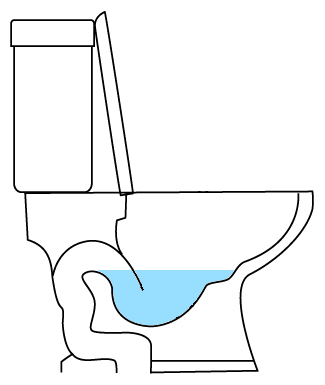 Also where should I stand. Maybe just the normal/in front is not the optimal place.

The male urine stream breaks up about 15 cm outside the urethra exit. The Plateau-Rayleight inestability forms the droplets before impact. The angle of attack, the distance (velocity of the stream) and the type of impact surface are some of the key elements that will determine the type, direction and amount of splashes. Droplets create a large cavity in the water (due to its surface tension), which then collapses, cause the splashback (similar physics for poop (AKA Kiss of Poseidon)).

There are some research. Splashlab was widely covered by media. Based on their research and video:

Is related to "How can I prevent pee from flying off-target?" but is not the same. I also don't want to put paper on the water before peeing (even if that helps). I'm not interested about sound issues.

The slower the droplet, the less force imparted on the droplet when it strikes a surface. In practical terms this means that nearer surfaces (less time for the droplets to accelerate due to gravity) cause less of a splash when struck, and if the pee stream hasn't separated into droplets but is instead a cohesive stream splashing is further reduced

It's a natural consequence of putting extra effort into pushing a pee out, that tiny droplets are going to leave the stream at source and fall independently of the main stream, with a greater sideways speed - aiming towards the middle of the bowl will ensure these stray droplets have a better chance of ending up in the bowl, as will moving source and destination closer together

So we're looking for a way to arrange the lowest force possible, as higher forces break droplets up more and cause more splashing over a wider distance

The absolute best way to minimise splashing is to sit down and direct the stream towards the centre of the bowl. It matters considerably less where the stream goes when sat as it doesn't have as far to fall so accelerates less due to gravity, is more likely to still be a cohesive stream when it comes into contact, and is more likely to catch nearly all the tiny stray side drops leaving the main stream at source

I presume however that you're talking about standing up

Most toilet bowl walls start out steep near the rim then flatten out as you approach the water, before dropping to a steep wall again for a few inches above the water. They're like this at the sides and front but are generally a single steep wall down the rear part of the bowl. Yours seems (it's a bit hard to make out the bowl shape in your image) to follow this rule but the rear wall is less pronounced. The best place to aim for for minimal droplet splash is the steep parts near to the water; they're central to give the best chance of catch tiny side spray droplets, and they're vertical to help falling droplets hit the surface and experience a low force/not smash up.

Because of the reduced size at the front and the sides, consider aiming for the back wall, a few inches above the water as this location is most tolerant of misses/wandering, unlike the sides and front where if you miss the droplets instead strike the most horizontal part of the bowl, the location where greatest smash-and-splash occurs.

If your toilet has better steep walls at the sides rather than the front or back, consider changing where you stand to make it easier to leverage the steeper part of the bowl (the stream travels away from you as it falls, so it's easier to hit a steep section if you're facing it rather than being side-on to it)

By striking a few inches above the water, friction will slow the stream down and before it enters the water, reducing splashing from the interaction between water and stream. It also has the added bonus of being relatively silent, if you have light sleeping inhabitants of the house

Aim for the steepest part of the bowl near the water, that's easiest to hit/offers the biggest surface to tolerate wandering. In the following image this would be to aim for the green dot, and you have the entire panel within the blue dots to cope with wandering. The pink dots at the sides and front would also work and are "better" because they're steeper but "worse" because they are harder to hit. If your aim is really good and really consistent go for pink, otherwise green is a better compromise between steepness and ease 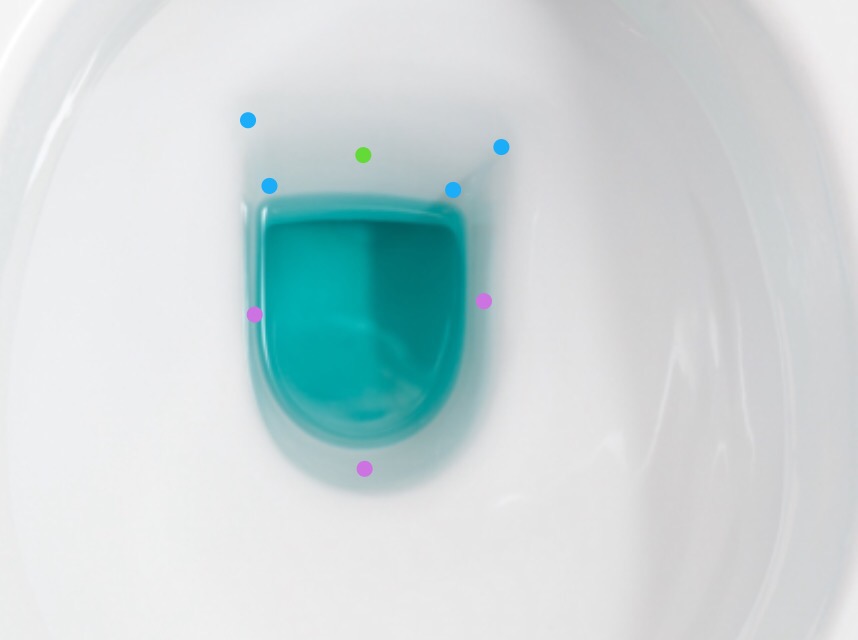 To reduce pee splashing to a minimum using a toilet under all circumstances, sit to urinate.

While standing, place yourself directly in front of the toilet and aim the stream of urine to the centre of the pool of water.

This practice is noisy however.

Other techniques may be more discreet. This only addresses the question asked.

The fluid dynamics of this question could prove challenging so instead I will refer you to the manufacturer's recommendation. Many are now including "aim points" to encourage users not to wave about randomly, but instead focus their efforts on the optimal targeting location. The target in the picture below is stylized as a fly and should provide you a good guide to your future lavatory encounters. Good luck! 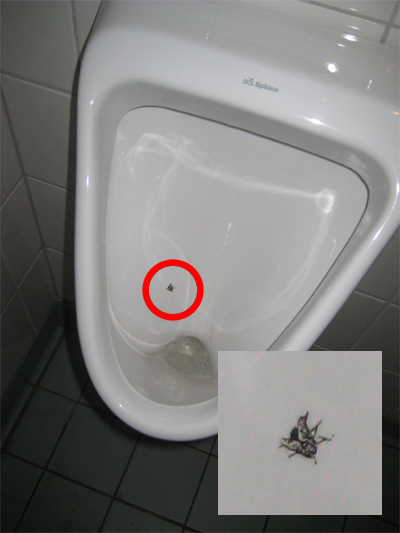 Through trial-and-error over many years, I have settled my target upon a point in G4 about 5-15mm within the apex of the curve.

I can only guess at the physics here, but no-one else has mentioned the part played by the interaction between water and wall. With the urine striking the water surface at an angle of around 20 degress to the perpendicular, there is enough depth of water to absorb the kinetic energy, but not enough to allow significant waves to build and cause some of the energy to be returned as splashes.

There's also a noise advantage with this technique - it seems to produce relatively small amounts of the low frequency noise which can be heard outside the room.

And I'll have no truck with the blasphemers who prefer to use the LEFT hand path - the "heathen D4's" as we call them.

Since we're in Life Hacks and not Physics, I'll share my own hack which I use sometimes, which is likely not common but it works well. (At least for me.)

When I want to avoid splash and can't/don't want to sit down I pee for about a single second, stop, wait a bit, then pee again for about a second, stop, and so on, until the pee if over. This way there isn't enough pee to have a splash every time, and it's also much more silent.

This way it doesn't matter where you aim at, but I am aware it might have some health issues. This reminds me I considered asking about it on Health.SE (Now Medical Sciences) and forgot. But until proven it's really not healthy, I'll use it sometimes.

Not the answer you're looking for? Browse other questions tagged bathroom house-cleaning liquids or ask your own question.

9
How to keep pee from splattering from the toilet all around the basin and on the floor on old toilets that are really low and have deep water?
9
How can I prevent pee from flying off-target?
15
How to avoid splash sounds in public toilets?
1
What is the special liquid for cleaning the peeing liquid on the floor?

5
How can I prevent condensation on the toilet flush tank?
6
How to turn on the motion sensor controlled light when you're in the toilet?
1
I need to get urine from one toilet to another to flush it, what should I do?
5
What is the most efficient way to get hair off a bar of soap?
4
Toilet paper is stuck in the dispenser, any way to reach it?
15
How can I prevent the water from hitting me while sitting on the toilet?
1
What is the special liquid for cleaning the peeing liquid on the floor?
0
How to deal when the solid waste are stick on the toilet surface?
9
How to keep pee from splattering from the toilet all around the basin and on the floor on old toilets that are really low and have deep water?