I live in Germany and we have a lot of snow on our roofs. In my room, I have a roof window, which is tilted such that the snow just stays on top of the window and I can't open the window anymore. This is very unpleasant because even if there is sunshine outside my room stays dark.

How do I get rid of the snow? Since it is a double glass window with low pressure in between the glasses, heat transfer via convection is very bad.

I thought about buying an infrared lamp and pointing it from the inside, through the window at the snow. But I am afraid that a lot of light will be absorbed/reflected by the glass and only a tiny fraction of the emitted energy will actually melt the snow.

Anyone a good lifehack to solve this problem?

It's possible to buy magnetic window cleaning devices where you have a part that stays outside and you move it around the window using a handle that controls it magnetically.

You could leave one of these permanently in place on your window (at least during the winter) and use it to push the snow off the window without having to open it.

If the snow is very heavy then I doubt that you will be able to apply enough force to push it without breaking the attraction to the inside part - but at least the outside part won't fall off the window, because it will be held on by the snow.

With a little practice, I think this may work for all but the heaviest snowfalls.

I have never tried this, but a hack could be to prevent snow from sticking in the first place by applying some Teflon® based preparation on the outside of the glass (when you can open it).

There are various commercial brands available, but whether they will work on sloping glass is something that you might like to try - later!

In addition, if you place an uplighter lamp under the window when snow is expected, there could be enough heat rising to melt any snow that falls before it can build up, by keeping the glass warmer than usual. 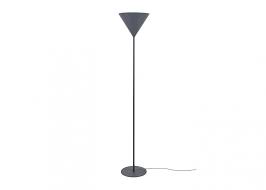 I know the window is double-glazed to reduce heat loss, but it might only need a small rise in temperature to melt the snow as it falls, so it can run off. The outer pane's temperature has only to be kept above freezing.

I have actually used a light bulb for a similar purpose. The water tank in my chilly old flat was in the bathroom and in the winter I kept the door shut and a lamp burning to prevent it freezing. My neighbours laughed at me: he thinks he can heat a room with a light bulb. But they weren't laughing when the freeze came and they were knocking at my door with kettles and buckets. The light bulb made just enough difference to prevent the tank from freezing.
Share
Improve this answer
edited Dec 6, 2019 at 8:46
answered Dec 5, 2019 at 19:38

The techy way to remove standing snow on a roof window or skylight, is with a flying drone or helicopter. Fly up above the window and deposit coal dust or other dark matter on the snow over the window, this will speed the sun's melting process by absorbing heat. Alternately you could use salt or other ice melt products.

Once the snow is melted you will want to open the window and clean it.

Perhaps you could apply Rain-X on the exterior face of the window (when it is not snowing of course), and it may cause the snow to drift off rather than settle. Normally it is used for deflecting rainwater on windscreens, which normally hold on to water in their surface imperfections.

I've experienced Austrian snow in Wien, so I know what Luke is talking about.

Not the answer you're looking for? Browse other questions tagged winter or ask your own question.

3
How do I quickly thaw the ice in frozen pipes?
4
How to remove ice formation inside the car windows
13
How to open a frozen car door?
2
How to remove snow from a roof
8
How to open a frozen padlock
13
How to stop snow from sticking to the shovel
6
How to get rid of frozen snow
4
Is there a way to avoid condensation of water on the inside of window panes?
3
How can I prevent my wristwatch from fogging up on the inside?