I want to do some maintenance on the rear derailleur of my bike and I want to have the rear wheel lifted off the ground to be able to rotate the pedals to switch gears while doing adjustments.

I'm looking for a hack, so I don't need to go somewhere to hang my bike or buy a work-stand like shown on the photo below.

In this case I have the gear shifter round the steer with he indicator facing upwards, see photo below. Putting the bike upside down makes it hard to shift gears and I cannot read the gear position from the indicator.

So, putting it upside down is not the answer for me.

To nail it down more: I want to lift the rear axis of my bike, block the wheels, keep it stable and be able to rotate the pedals. 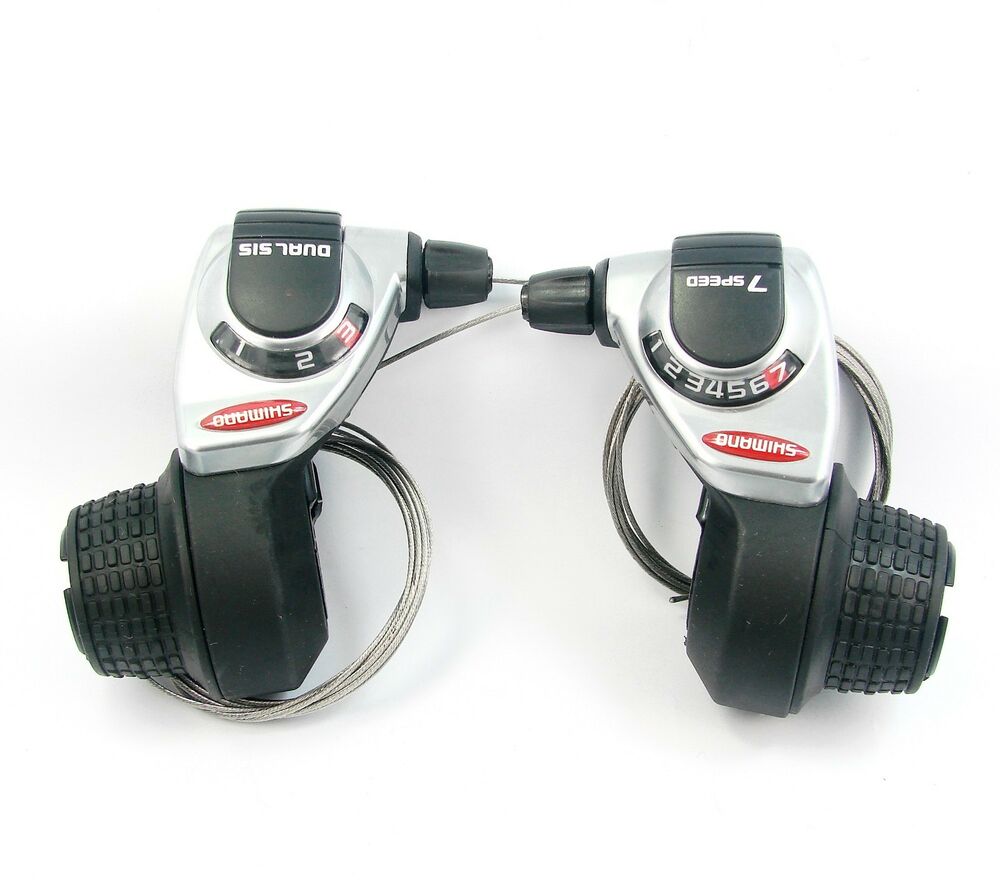 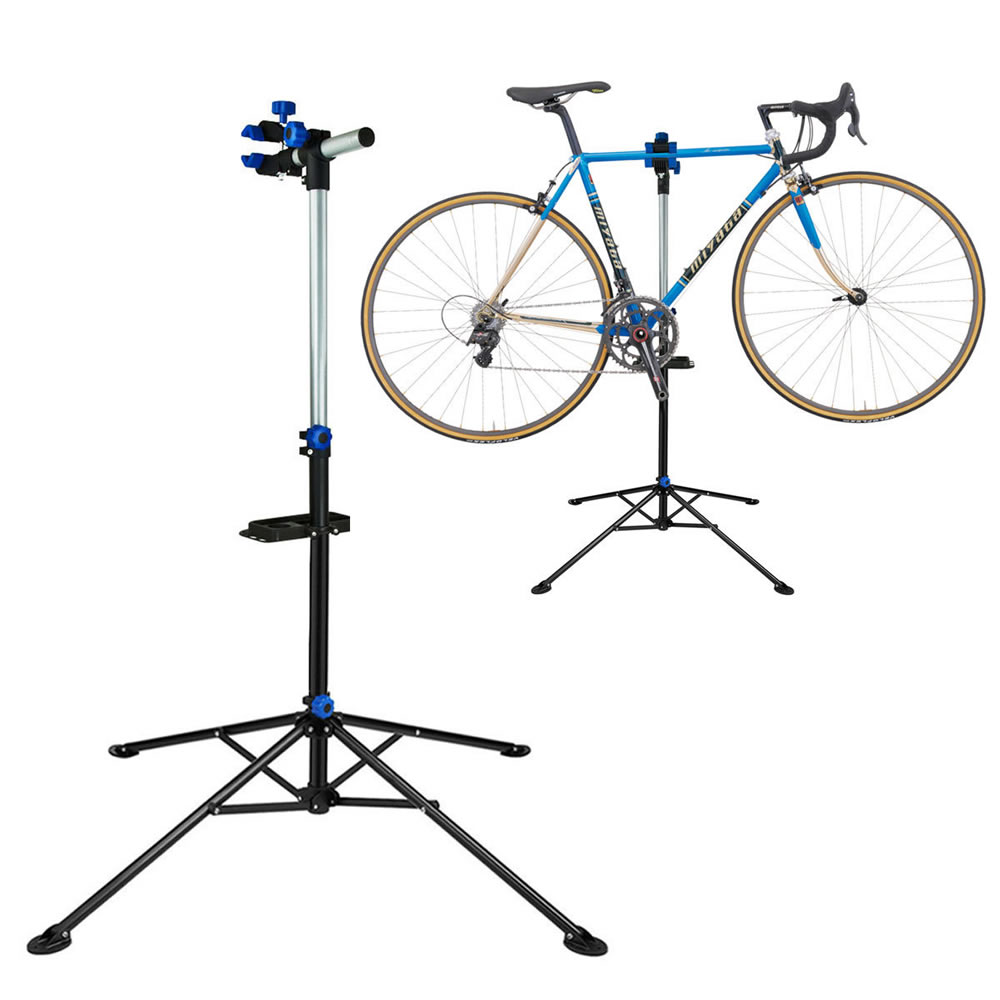 When I mend a puncture or do maintenance work on the chain, I just put my bike upside down. I do have a rather broad saddle; a racing bike might be a bit too unstable to stand still on its own. Still, you should have some other (moderately heavy) items lying around to stabilize the bike, e.g. by preventing the frame to move to either side.

IF (big if) you have conveniently located doors, shelf units, or even a couple of hi-back chairs, you might be able to use these to support something stretched between them.

In a perfect world, you would tightly attach the bike top-tube to a pole, pipe, or 2X4 timber that would extend beyond the front and back enough to bridge the gap between the supports with the bike "hung" between them.

"C" clamps or duct/"Gorilla™" tape can be used to steady the "assembly" enough to get you through your project.

Turning it upside-down is by far the easiest and hackiest solution.

For reasons I can't recall now, I once needed to have the bike the right way up when working on it and I made a temporary stand out of some pieces of wood. I can't even remember which part of the bike i supported with the wood, but I assume it must have been the crank (under pedals).

Obviously, this is only a hack if you happen to have the tools and the skills to quickly do it - as I do, but if you cut a "V" from the end of a piece of wood and then screw it into the middle of a flat piece (the other end from the "V") the "V" will accomodate a range of sizes of a circular part.

Assuming your bike is a road one like pictured:

If turning the bike upside down is not helpful, consider one / some of the following:

When I was a child I had a bicycle. Although I did not repair it in the common sense of the word, I needed to "things" to it occasionally. Special supports were obviously out-of-the-question. It was very easy to just turn in upside down, do whatever needed to be done, and put it back on the wheels at the end.

The most trouble was with the chain, which would slip and was occasionally difficult to lay it back properly.

The stability of the "turned" bike is given mostly by the width (length?) of the handles. The bigger, the better. They actually form a triangle with the seat. Ideally, the seat is not thin and rounded - in that case the stability might suffer.

My bike was the most simple one, with no gears and no breaks (I would press the pedals the opposite way for breaking). I had exactly the same issue, because re-laying the the chain required rotating the pedals, to rotate the wheels in the process. 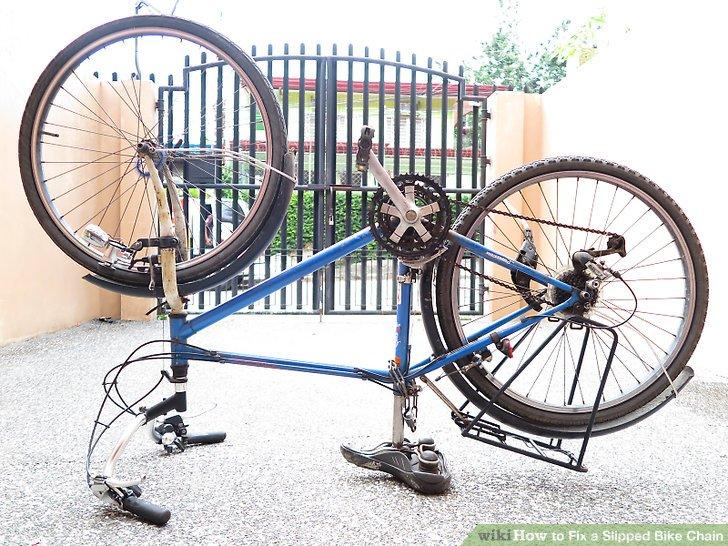 I have a bike rack for carrying the bike on the car. Mine holds 3 or 4 bikes.

If I put the bike on this in the farthest out position it works to hold the bike off the ground and leaves room for the pedals to turn.

Forgive the poor picture, however depending on your furniture layout and type, you may be able to use 2x "dinning room" chairs and a broom stick or similar to lift the rear of bike frame from the floor.

Set the 2 Chairs / other pieces of furniture, on either side of your bike, run a broom handle or similar through your bike frame and rest on both chairs. 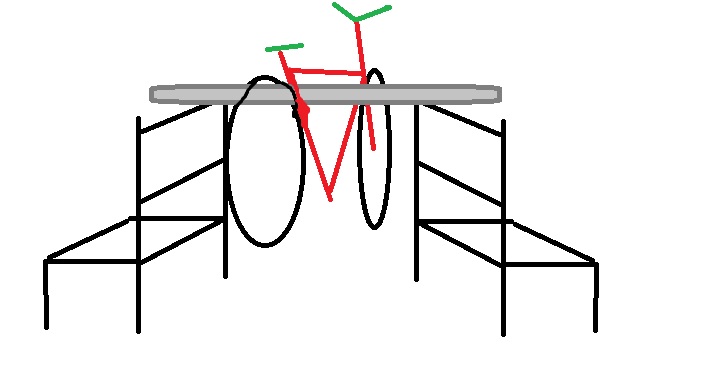 Apologies.. my answer mirrors another answer earlier who suggested a "Hang"

I had a need to fix bikes at local popup-fixup events. But to still be mobile, I carried all my tools on a bike trailer.

Not owning a stand was awkward, so instead of spending big money on a good one, or accepting a janky cheap stand, I made this: 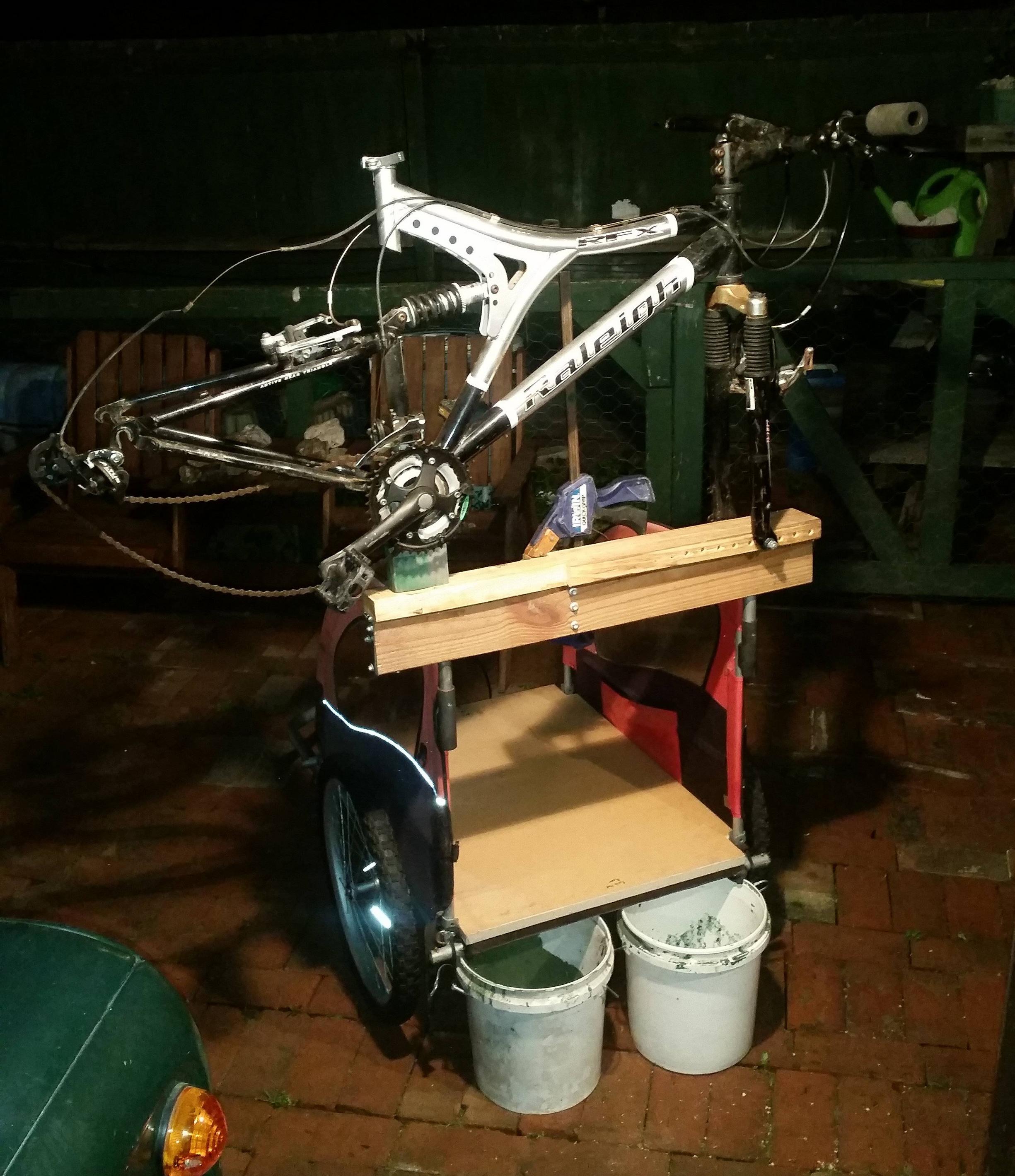 Its a cheap kid's trailer, and a main beam that has two pipes underneath. Those pipes slotted into the handlebar's plastic brackets, so later I swapped those out for two steel seat posts I'd cut out of old steel frames.

The front wheel has to come off, and the front forks are held on to a length of threadded rod (allthread) with two nuts and a lot of washers, to allow forks of different styles and widths. Note this probably won't work well with front through-axles, but bolt-on and QR axles work fine. However tweaking front brakes has to be done off the stand.

The rear of the bike is cantilevered out the left-side of the trailer. This lets the drive train spin while its on the stand, necessary for fixing and tuning gears. An odd-shaped bike might not fit very well, and a heavy bike might cause some imbalance, so I leave my heavy spares boxes in the trailer. I also use a couple of buckets to take the weight off the tyres, and the drawbar is tied off to something immobile ideally. 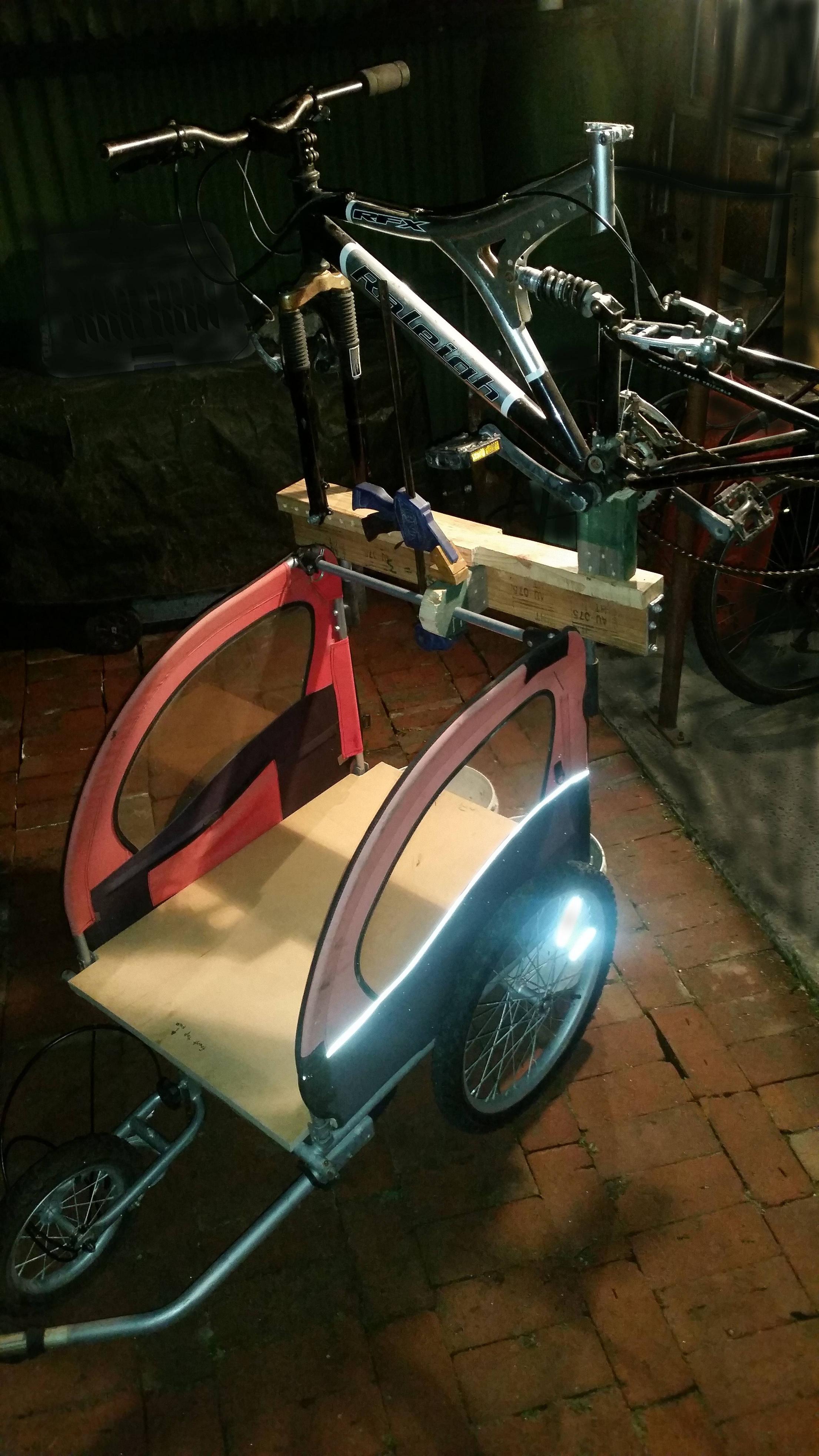 Get a piece of rope about 1.5m long and tie an 'S' hook onto each end. Use the S-hooks to loop onto the bike's saddle and handlebars and suspend the bike from the rods on the rear of an up-and-over garage door (or something similar). Works a treat and places the bike at a comfortable height to work on it.

Depending on where you are in the world, your nearest city may have public fixup stations, like this: 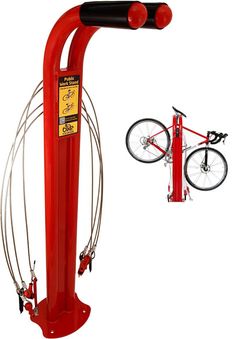 These hold most bikes, and have a small selection of essential tools and an air pump.

If you don't have anything like this, a jungle gym at the local park, or a convenient tree branch could be a substitute (though you'll need your own tools and pump)

Not the answer you're looking for? Browse other questions tagged bicycle or ask your own question.

6
How to put a slipped bike chain back on the freewheel without getting dirty?
5
How to retain air in the tires of bicycle for long?
5
How to keep your hands warm while biking outside without using bulky gloves
7
How to comfortably carry a pen drive in any attire without risk of physical damage?