How can I remove decades old tape from paper without damaging the images printed on paper?

How to remove decades old clear tape from paper without damaging the paper or image that is printed on the paper?

The tape's aged, oxidized adhesive has already damaged the paper and any images or text it carries, and there is no practical way to reverse that damage.

Often, the plastic film layer of the tape will have fallen off the paper on its own, because the adhesive no longer bonds it -- but the adhesive will have soaked into the paper and hardened; removing it is effectively impossible. Solvents that might dissolve the hardened adhesive are likely to remove commercial printing inks, even after decades.

Best you can do is avoid doing further damage. If it's the images themselves (rather than the artifact of "page with images") that are important, it may be possible to scan the images and repair them digitally; such repairs, expertly done, are invisible.

The glue on very old tape has quite likely gone dry and brittle, and lost its adhesive property.

But when removing any adhesive tape, label or sticker, peel it off very slowly (start in a harmless area) to give the glue a chance to separate without tearing the thing it's stuck to, or what you are peeling off. The glue may be stronger than either, initially, and by peeling slowly it gets a chance to stretch and separate into filaments, which individually are quite thin and eventually break. 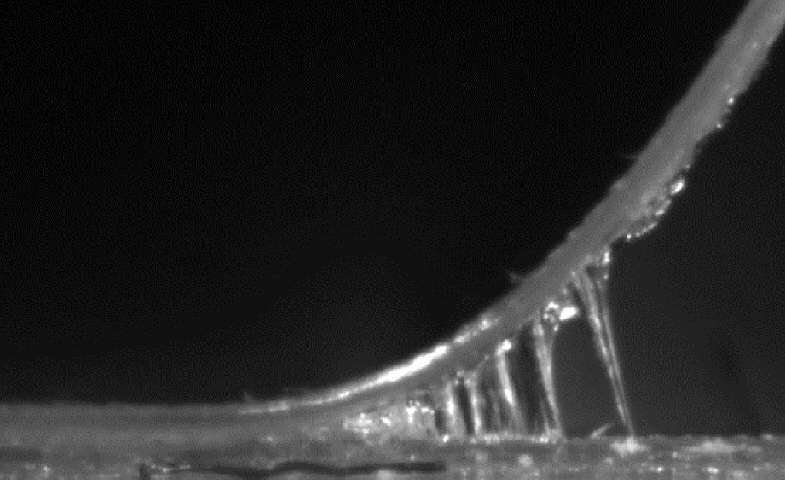 I agree with Zeiss Ikon, but there's a technique that I've used somewhat successfully to remove the more visible traces of the glue, but it has risks.

Using a razor blade or Exacto style knife, you can scrape the hardened glue away from the photo. It's not easy, you need to go really slowly and carefully, and you need to have a really steady hand. Using a rounded cutting edge works best, as it's less likely to catch on something and make an obvious gash when you scrape too hard.

Which leads to the possible problems with this option. You can physically damage the photo worse than it already is, if you aren't 150% careful. Scraping hardened glue off steel with a razor leaves scratches, unless you do it right. The photo is obviously more delicate than steel, so you'll need to be that much more careful. Worse than scratches, you can also cut the photo, if you slip too badly.

Don't pick at large sections of the glue. This can cause the image to separate from the backing paper. Use small, delicate strokes on a small section at a time with light pressure. Try to make it more of a cutting action, where you are cutting the glue away from itself into tiny sections, then change the angle of the blade to cut the tiny fragments from the photo. Most of the time, if you cut the glue into small enough fragments, they'll just break off on their own.

Start in an area next to the border of the image, if possible. This should be your test section to see if it'll work for you. This should be in an area that doesn't really matter if it gets a little damaged, but stop immediately if you start causing damage.

This is not a 100% solution. You'll still likely need to do digital repairs on the image, but it should be less work to make it not obvious what happened. Depending on your skills with a razor and photo editing tools, digitally fixing the photo might be easier and quicker.

Also, this technique is only for thick adhesive glues, like duct tape or even masking tape. If you're looking at packing tape or "Scotch" tape, this won't work. If you can easily feel a rough or thick layer of glue, you can try this method, but if it's a very thin, smooth glue, this won't work.

Each photo is different, as far as fragility. Some can take rough handling more than others. If this is an extremely delicate photo, don't use this option, as you'll only damage it more.

Not the answer you're looking for? Browse other questions tagged paper or ask your own question.

2
Remove Ink That's Scribbled on top of Printed Text?
2
How to separate paper from college block?
4
How can I quickly and easily attach two (or more) piece of paper together with tape?
3
How should I re-attach the top sheet of paper that has come loose from a stapled group?
1
Removing ink/toner from smudges on thick paper
2
How can I remove gel (?) Ink from a book?
1
How to remove a strong sticker from book
0
Pencil Mark On Vintage Poster
2
How to make sure a document stays long term readable?
3
How can I prevent a receipt from fading?