How to keep money out of sight at home?

I want to keep a few dollars each month out of sight from family members, but I don't want to use a wallet or piggy bank.

So what would be better way to do this?

Sorry but I do not recommend non-valuable things (bottles of drinks, unusable books) because someone can throw them like your mom while cleaning.

It is also a not good idea to hide it in a secret place because someone can find it. Believe me, your hidden treasure can be lost.

According to me, the best option is your locker room (school/office locker rooms or your personal home locker rooms); they are the most secure place.

If you use perfume, deodorant or any costly creams and you have it along with the box you can keep the money in the box and the bottle above it. Keep it in your locker.

You can also keep it inside the pockets of occasional dresses like your party coat, it fits your size only so nobody will use it.

You can buy "secret stash" items. They look like various non-valuable things, cans of food, bottles of drinks, books, even light switches. If you're very handy, you might be able to make such an item. Which will work best for you depends on circumstances -- if you don't normally keep food in your room, obviously a "can of beans" isn't a good choice (or if your family members steal food from your room, for that matter).

If there's enough of it to keep as "folding money" you could just bookmark it inside a paper book -- one no one in your family is likely to pick up and open, like a dry textbook.

If your family won't be likely to actively search for your money, but just "pick it up" if they see it, you could even put it between your mattress and box spring/platform, inside a zipped pillow cover, or inside a rolled up pair of socks in the back of the drawer.

Create a secret drawer compartment in any of you compartment. Never share this to anyone in the family and thats it. 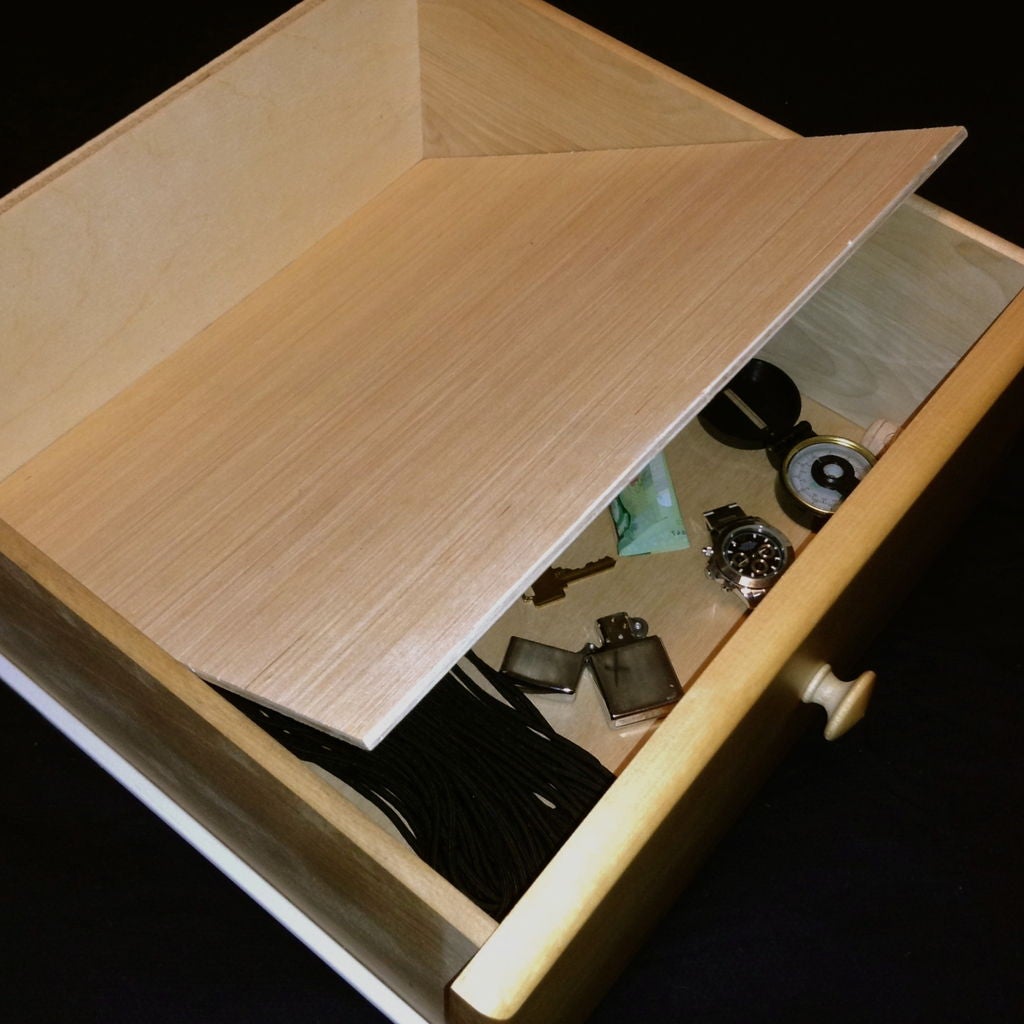 Place it under your underwear or socks in a drawer. If the topmost underwear piece is white and has been stained by you with coffee on purpose, you can virtually guarantee that no one will lift it up and search underneath it.

I would search the Internet for, "Where are likely hiding places for cash at home" and avoid using any of the answers given since someone has already found those places.

Here are the ones that are popular to avoid:

These are go-to places where people have traditionally hidden cash. Hiding places are unique to the house and to the individual. Don't forget to find a way to document your stash so no one will mistakenly discards it.

My grandmother stashed a small fortune (cash) in an ugly chair that was given to a charity after she died. We only found out after the chair was long gone. The one who opens the chair upholstery is going to get quite a windfall

I generally don't recommend keeping much cash at home, since there's always the possibility of losing it, getting robbed, or losing the house to a fire or other natural disaster. Even if you keep money in a vase, a robber might think it'd be a good gift for their mom/girlfriend.

There are a few places that can be fairly safely used, though.

Safes are a common place to put money, valuables, and document, but they are also targets for robbers. They are also often located in fairly standard places, so are easy to find. As long as you make sure it's as difficult for a robber to find, remove, and open your safe, you are good to go. And spend a little extra to make sure it'll survive a disaster. Since this is so easy to use and there are plenty of resources online that talk about safes and their proper use & setup, I'm not going to get into that.

Also, wall safes can often be yanked out of the wall. A safe just sitting on the floor can be wheeled out using a dolly, or just picked up. Many safes have weak sides, bottom, and top, and only protect from the front/door.

The fridge and freezer is also a moderately common place for robbers to look for money and valuables. However, disguising it can be easy and amusing. It's the old "security by obscurity" that's bemoaned by people, but it can work as long as it's done correctly and with a few other safeguards in place.

Use something that a thief and your family isn't likely going to notice.

Pill bottles are a good one for the fridge. Make sure they are the "child safe" type and also make it something boring, like an antibiotic that can't be sold on the black market to get high. Also, print out a picture of pills piled up, then put it into the bottle so it looks like the pills are actually in the bottle. Most bottles are amber colored, so it doesn't even need to be a good printout. Putting in a few things for weight and to pass the "shake test" will help. A thief won't take the time to verify the contents, even if they decide to look at the label.

If you choose something else for the fridge, whether it's a bottle of V8 juice (because no one in your family likes it), or an "extra" butter container, make sure that it doesn't just sit in one place forever. That'll draw attention to it. Also, make sure you update the container every so often. You don't want it thrown out because it's passed the expiration date.

For the freezer, pick a vegetable bag or label a container "meatloaf". If you really want to scare them away from the container, put a blank label on it with just a few smudges of marker to make it look like it's "mystery meat". Again, if it's see through, print something out to make it look legit. If it needs to shake, add that effect. If it needs weight, add that, too. Then bury it in with all the other items in the freezer. Make it look like it belongs there so it'll be invisible to anyone who doesn't know what it is. Again, this risks someone just throwing it out while cleaning.

If you really want to get sneaky, build a fake bump in the back of the compartment. This will not be easy, since you'll need some DIY skills and attaching anything to the plastic will not likely stick, while still needing a way to add and remove the hidden items. There's a lot of moisture, cooling contraction, bumping, and other factors to consider. It also needs to look like it belongs there, as if it's a fan, thermometer, or something the manufacturer would have put there.

You can try taping an envelope to the bottom of a shelf or drawer, but that blocks light and will leave a shadow. It's also fairly common, so a thief might find it easily.

Pin every bill individually above the doors. Nobody will never ever look there. Grab a chair and the top part of every door is yours from now on. Keep a towel in hand, just in case someone comes inadvertently so you could pretend removing the dust.

In my past experience of keeping money out of sight , I found CD cases to be useful, random CD's that are of no consequence are good. Also consider any furniture with metal legs which has a plastic stopper in the end of the leg, if carefully removed , this provides a safe dry place to stash your cash , just remember to remove it if you are getting rid of the furniture. A former housemate of mine assures me that the best place to hide anything is inside an "adult toy" with the batteries removed as no-one would be willing to handle it! Hope these help you.

Not the answer you're looking for? Browse other questions tagged home or ask your own question.

14
How to cover nail holes effectively and inexpensively?
10
How to get stains out of the garage floor
18
How to light a candle without a lighter or a match
0
How to find out what size storage is needed?
2
System for splitting costs on shared items and household goods with roommates
7
Best way to stop USPS from delivering past tenants' mail?
3
How to keep toddler from lifting the hvac grate on the floor?
4
Best ways to use free electricity?
1
How to eat like normal during major renovations