I'm beginning research on how the Earth's Coriolis Effect affects solids suspended in moving liquids. I have run into a challenge that lifehackers may be able to help solve.

I would like to compare two similar liquids—one turning clockwise and the other turning counter clockwise at the same rate. This has presented two challenges to either solve or adequately counteract/compensate.

I can't figure out how to "mark" a liquid to track its movement. I can't figure out how to affect the liquid (move it) without the interference of some object. For example: I have used magnetic mixers that use encapsulated stir-bars to mix chemicals in my lab but they (and all others I've found) all spin in the same direction sitting on the bench. I found it might be possible to change the direction of the rotation of one of two magnetic mixers; but, that introduces other distractions (the stir bar) that I'd prefer to avoid if possible.

A fair number of laboratories use toys like Fischer Technik or Lego in simple experimental setups. You could use them or similar, modular equipment to build a frame that connects 2 stirrers with an even number of same size gearwheels.

(I'm certain I don't have to explain to you, but maybe some other users might not know immedieately)
The even number of gears means that the gears at opposite ends of the setup rotate in the opposite direction. Using gears of the same size means that all gears rotate with the same speed.

Attach a stirrer on each end and let them get your fluid up to the desired speed. Then move the whole frame up and away from the containers. This exposes both liquids to the same influences (like drag from the stirrers). To make results as comparable as possible, I would build some kind of guide rail to move the stirrers out of the containers evenly. Maybe you can keep the stirrers rotating while moving them up, so the motion of the liquids is disturbed as little as possible.

Measuring the speed of the liquid is a bit more difficult. You might be able to do a magnetic revcounter with a small magnet stuck to a bit of cork that will float on the liquid. Or aim a video camera at the liquid, drop a floating object in and measure the spinning speed on the video. Make sure the framerate is high enough though: 24 fps video means you shouldn't spin the liquid at more than ~12 revs/s.

Certain popular second hand selling sites appear to have a reasonable proliferation of vinyl turntables for not very much money. I'd suggest that a belt driven one would work better for your purposes because even if you cannot get the motor to reverse by swapping the wiring over, you can reverse the rotation of the deck by having one belt be looped onto its motor with a single twist (figure 8 rather than figure 0). If you mount the motor at an angle it will help the twisted belt avoid coming into contact with itself

You can also be reasonably sure that your centrally placed container is rotating at a particular speed, given that these things are calibrated for audio playback and you'll get a choice of speeds; 33, 45 or 78 rpm

If speed matching is very important to you, perhaps seek out some intended for DJ mixing. Not only will they have a control that will vary the speed up/down by some reasonable percentage, but they will have a sequence of dots embedded into the edge of the table and a strobe light that shines on said dots. The dots are arranged in a few bands at different densities and appear to stay stationary when the table RPM hits an exact value. What value isn't so important; even if you configured the table so the speed was X and the dots were "crawling past at a rate of 3 dots per second" on both decks you could be certain they were rotating at the same RPM. One table would be in reverse but the strobe system wouldn't care; its just an on/off light and doesn't rely on a particular direction to indicate rotation rate 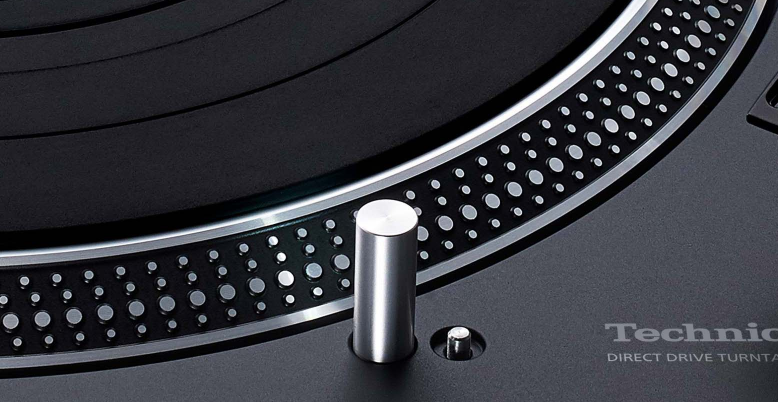 10
Substitute for a tablet stylus
3
Earplugs hacks for keeping water out of my ears?
4
Makeshift stand for large tablet
0
Earbud wiring setup to avoid yanking laptop / tablet when fall asleep
3
achieving a stable video-call experience with an infant or toddler
10
How to save the water wasted while waiting for the shower to heat up?
0
How to store sea water as a souvenir for years
1
Using liquid detergents for a pre-wash cycle with a powder only detergent drawer
0
To pour liquid medicine into a Teaspoon/ Tablespoon (for exact measure) from a dark glass/ plastic bottle without wastage, spillage or dripping?