How can I restore the shape of a deflated soda plastic bottle without breaking or opening the twist cap?

I have a plastic soda bottle (with soda in it) that has already deflated. It is closed and has a customized label. I got it many years ago, and it has deflated over time. How do I restore it to its original shape without breaking or opening the twist cap? (I don't want to destroy the bottle)

Worst case, I'll probably just throw this away, but I'd like to keep it as a souvenir.

Edit #1: The 2 pictures are the same bottle. It's not photoshopped. It's just taken at 2 different angles. At the right, you can see how compressed it is, because the bottle has lost air. 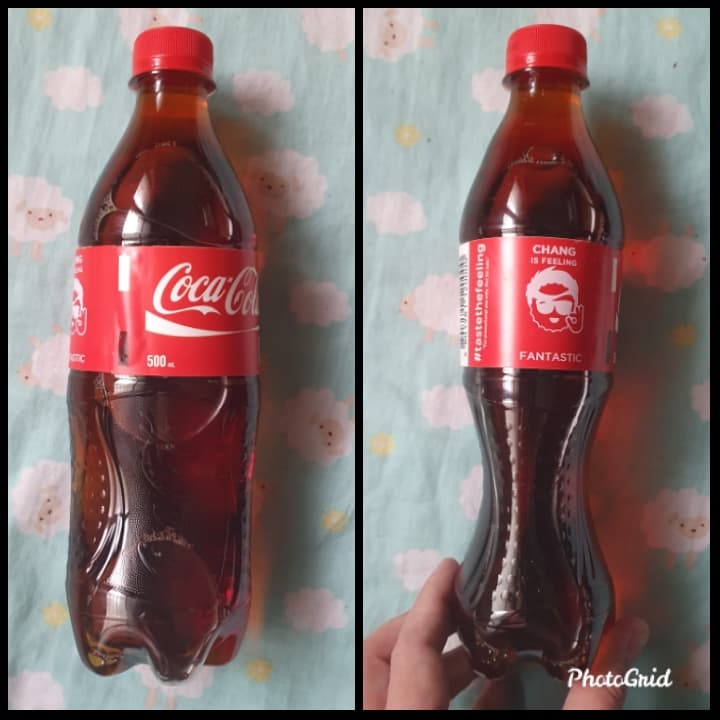 The ring on these types of bottle caps is usually attached with several strands of plastic. This specific type is attached quite strongly and many people lacking strength in their hands find it difficult to open them.

On the inside of the cap ring there is a row of "barbs" that catch onto the bottle nech while twisting the cap and cause the ring to seperate fron the neck. If you manage to deactivate those barbs, you might be able to open the bottle without seperating the cap ring.

Please note that this method may fail despite your best efforts.

I would heat the cap with a blow hairdrier and then insert a thin but sturdy object between cap and bottle neck to press the barbs flat to the cap ring. That way they hopefully don't catch on the bottle neck.

Since the plastic is slightly more elastic while hot, I would try to carefully open the bottle while the cap is still hot. Be aware that soft plastic usually loses it's elasticity over time.

An alternative would be to store the bottle in a preassurized chamber for some time. The plastic of the bottle itself is permeable for gases, hence why the bottle collapsed. In theory you should be able to reverse the process and press gasses back into the bottle, but it would probably be a very long and slow process. I'm not sure how practicable it is to keep a pressure chamber pressurized for half a year or longer and I honestly don't know if this would even work.

Why don't you ask the Coca-Cola people.They probably have seen this before and may have ideas. Example, you could expand/stretch the label to remove it and place on another bottle, or on a stylized pseudo-bottle. If you suggested ideas to them, they may become inspired to help preserve their marketing history.

Drill 2 small holes: one at the top of the bottle, one at the bottom. Drain the cola and rinse with water.
You could even do this with only one hole, but it'll take longer.

The deformed bottle and its label appear to be identical to the one on the left, except for the deformed shape. The one on the left could be the same bottle photoshopped to the correct shape. But the background is not distorted to match, so it's a different bottle.

If you want to keep that actual bottle I suggest opening it to allow the shape to restore, and topping it up with more cola, after letting it go "flat" (no dissolved gas in it).

4
How can I repair cracked LDPE without a plastic welder?