Coping with the dynamic loudness inequality of a Zoom classroom

A Zoom elementary-school class can be heard in my home every weekday. The teacher and most kids sound fine. But one or two kids either have poor-quality/faulty hardware, or their microphone preference setting has been slid all the way up to 11. The relative difference, when those kids speak, is startling, staggering, has to be heard to be believed. For me it is markedly more distracting than having a kid in the house in the first place—which is saying something—or having a normal class/meeting/TV going in the background.

The loud kids are not to blame—they're just ordinary kids innocently saying ordinary things (sometimes, sure, with a certain amount of 6-year-old gusto), unaware that they're causing a noise tsunami of compressed/overdriven shouting in 25 other homes around the district. This does a great disservice to those particular kids themselves (the rest of the class must cringe when that one kid is called on to speak) as well as to the rest of us trying to keep our jobs going in the same house (when the rest of the class speaks, there's no problem, but when that one loud kid talks, there is literally no room in my house in which he doesn't rattle the windows and cause my focus to evaporate).

Can anybody offer a quick solution to this? I'm imagining maybe some kind of external speaker (or, if necessary, headphone) that implements dynamic volume normalization. Unfortunately, as far as I've found so far, that's only implemented in high-end home-theater equipment—but maybe I have missed whatever cheaper solutions are out there? Or maybe there's a software system extension, for one or other operating system, that will do this job? This would be a rare example of software I would gladly pay for, but my search has drawn a blank so far.

Here are some approaches that I've thought about, which I think won't work:

(Note that approaches 3–5 are all along the lines of attempting to control what other people do, rather than what I do, so their mileage is going to vary widely even under the best of circumstances. In particular, among her own million pressures and concerns, the teacher is not affected by this problem in the same way I am—the loud kid is part of the channel she's tuned into anyway, and she is not struggling to pay attention to something else.)

If you have a Windows computer, you can try to limit the peak level for your output by using SoundLock. There may be an equivalent program for the Scottish computer.

The directions are on the site. You set the maximum volume you wish and the gain is clipped at levels above that setting.

You can find a myriad of other solutions for LIMITING gain, volume, etc. by searching the term "limiting" or "limiters" or "peak-limiting." Also, gear can be "active" or "passive." They work.

EDIT: A similar question about an audio output limiter for Mac was asked on StackExchange "Ask Different" for Apple products. There, the Apple AppStore and other solutions were discussed.

If you have Windows with a Realtek Audio driver, there is a setting for Loudness Equalization. 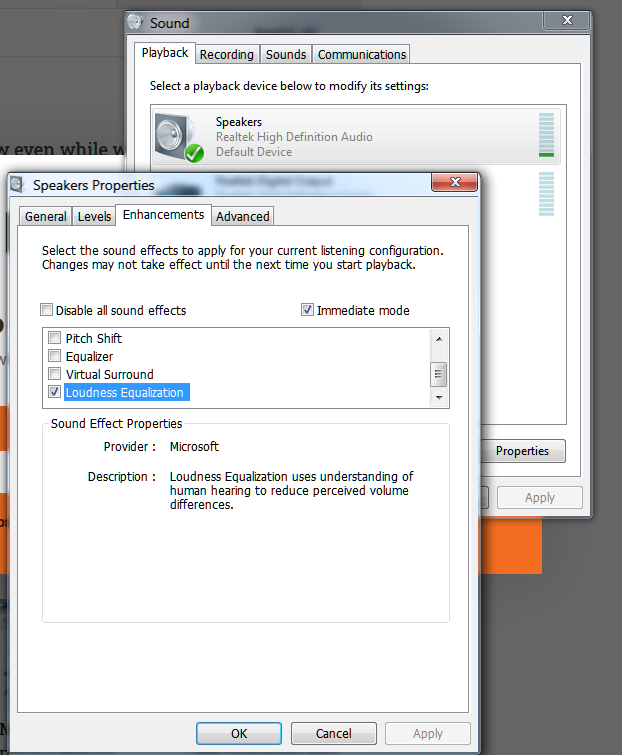 Loudness "equalization" was the MS term. Such that increasing the volume above a certain point does not affect the output volume for a given sound source. There are individual volume sliders for each application in the "Mixer" as well as external speaker amplifier options to choose the best " loudness equalization" levels overall.

You may notice a boost when this is enabled, which is normal then you would reduce the speaker level to suit your needs.

What you're looking for is a Automatic Level Control (ALC), sometimes also named Automatic Volume Control (AVC). This is a circuit which limits the level of the audio output: it will lower the level of all audio above some threshold to the threshold level.

There are standalone units, here is a radom one , but sometimes amplifiers also have an ALC incorporated (can't find an example online right now). I would maybe also ask at a local hardware shop if they can recommend you something.

You will then route the audio of your PC through the ALC before going to the speakers.

Maybe there's also some software which can accomplish the same (and which might save you some bucks - the above example ALC comes in at $230), but googling around I didn't immediatley find something.

In the line of Tony and 1NN's answers, an option that offers power without cost is a free DAW or DAW trial, like Reaper.

If you're at all techy, create a virtual audio cable and set Zoom's speakers to its input. Then create a project in Reaper with a single track whose "mic" input is the virtual audio cable's output. Monitor the track, and keep the Reaper project open whenever using Zoom.

Then, crucially, apply FX to the track. This is where the power comes in. There are tons of free and paid FX plugins that allow you to manipulate the sound. You could introduce a compressor/limiter, use an equalizer to lower that house-shaking bass, even de-ess everyone for less noisy sibilants. You could also easily assign a hotkey to lower the volume while held, which your kid could discreetly press when the loud student talks. As much as you want to add is up to you.

Not the answer you're looking for? Browse other questions tagged sound or ask your own question.

27
Sleeping in a noisy environment
1
Managing day-to-day sound from upstairs neighbours
1
How do I live with noisy neighbors?
2
How to filter out bird chirping from the background in live teams / zoom calls