I have a new watch with a steel wristband (or strap). 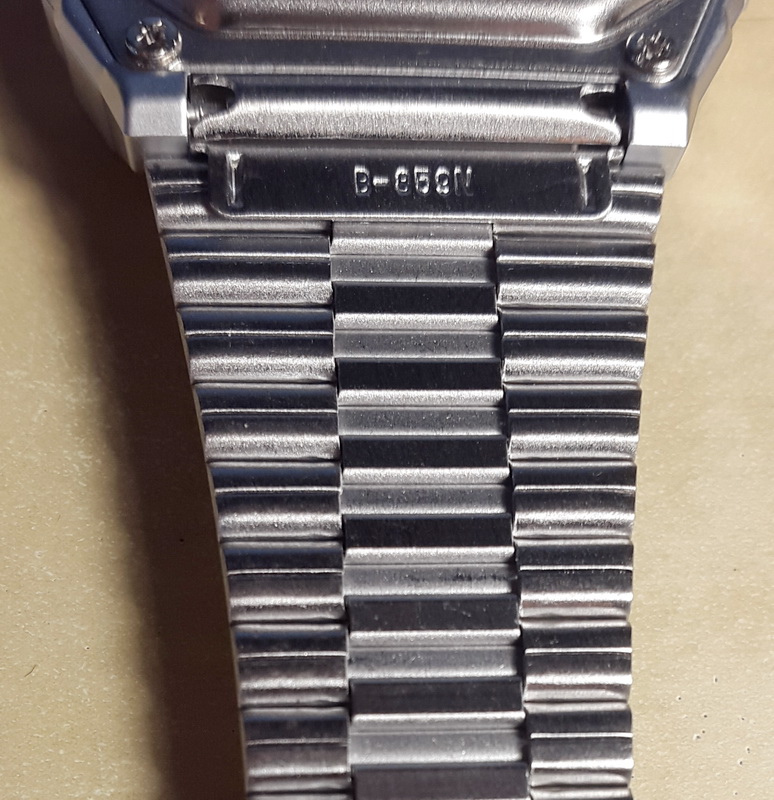 I had a few similar ones in the past. From that experience, the strap gets dirty and is very difficult to clean due to its complicated shape with crevices between the links. But worse, when exercising, the metal reacts with sweat (oxidises or something), leaving black residue on the wrist. I want to prevent this.

For reasons I'm not getting into, I don't want to replace the strap with a silicone one or something else naturally inert. Instead, I'm thinking of spraying or otherwise applying a thin protective layer to the inner surface, such as rubber, silicone or some such.

I also have some silicone, but it is too thick to be applied evenly.

It's easy enough to apply a sticky tape of some sort, but even the best one won't conform to the surface of this complexity, and dirt will happily get under it.

If the circumstances require you to know the time, use another kind of timepiece such as a pocket watch or on a lanyard around your neck. I have a smart phone that will tell me the time when/if I ask and/or announced periodically. Time pieces can be attached to handy reference surfaces such as a wall or object.

If the circumstances require you to engage in activity which is strenuous or dirty enough to require you to wash before you continue with normal activity, consider removing the inappropriate article (ss bracelet) during that activity. Slip it into your pocket.

When the circumstances require you to engage in activity which is mutually exclusive to your desires, reconsider your choice for either.

You could use a fabric cover like it is shown here: 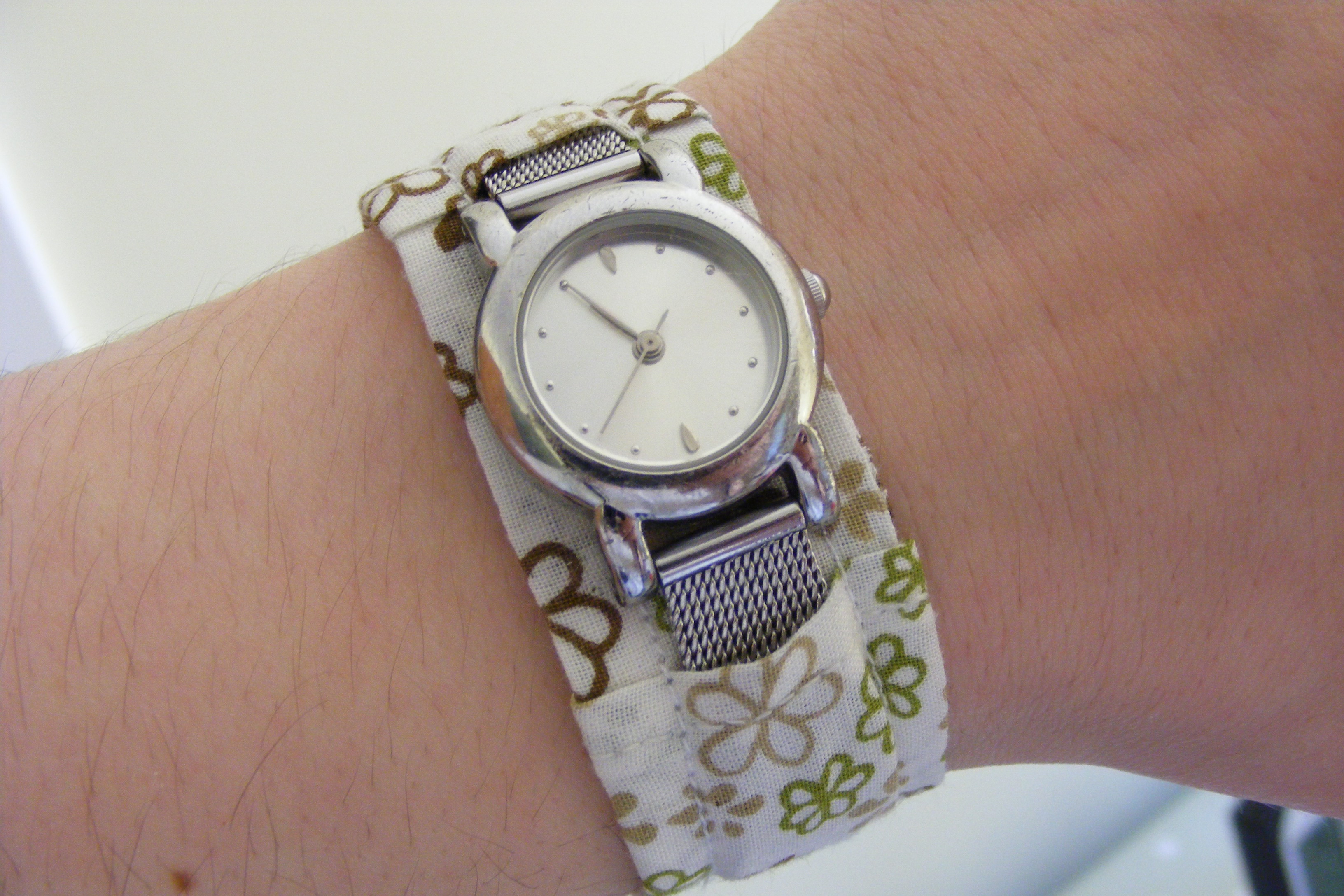 This won't prevent dirt etc from accumulating, but you can wash it after exercising.

Instructions how to make such a cover can be found at https://www.instructables.com/Fabric-watch-strap-cover/

It's easy enough to apply a sticky tape of some sort, but even the best one won't conform to the surface of this complexity, and dirt will happily get under it. 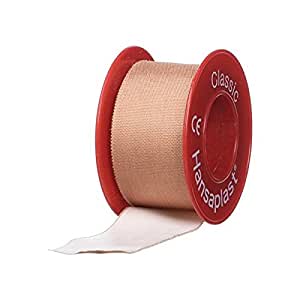 The glue is very sticky at body temperature and the fabric is flexible enough to bend with the metal watch band. It will prevent black from the metal to rub off on you, but like a fabric band, it will get dirty over time. On the plus side, this also prevents these tiny hairs from getting trapped in the metal band.

In my case this was durable enough to only be renewed about once a year.

I would expect silicone to be a good material for this: its flexible, inert, water resistant, reasonably hard-wearing, and sticks to metal.

You said that regular silicone sealant is too thick; you could try silicone seam sealer (marketed for sealing silnylon camping gear) which is more liquid. There are also various DIY methods of diluting silicone for this purpose, though none seem to be particularly good.

Various kinds of elastic coating materials are available that might serve your purpose for a thin flexible insulating layer against your skin and your articulated watch bracelet.

I have used Liquid Latex (Web search) for various purposes and while it is not meant to be permanent, it is easy to work with and cures to a flexible material. All sizes are available.

I have not used Liquid Rubber™ but the characteristics described for the product may be good for your intentions. Again, a search for the material will be easy.

No matter the material you use, best results will probably be by applying (by brush) your coating on only those surfaces that touch your skin and by avoiding any articulating parts which do not.

You could use one of those charity/promotional silicone wristbands that were ubiquitous a few years back - put that on your wrist and then wear the watch over it (depending on the relative width of the band vs watch you may need more than one). This will give you a flexible silicone layer in between your skin and the metal, while remaining non-permanent and also effectively invisible.

While they're not as a prevalent as they were previously they are still widely available, durable and inexpensive - you could probably even get a sample from a promotional goods company for a nominal cost or even free.

Depending on the size of your wrist you may need to shrink the wristband to get a snugger fit.

Well, I've done quite a few experiments and now I can share my own solution. 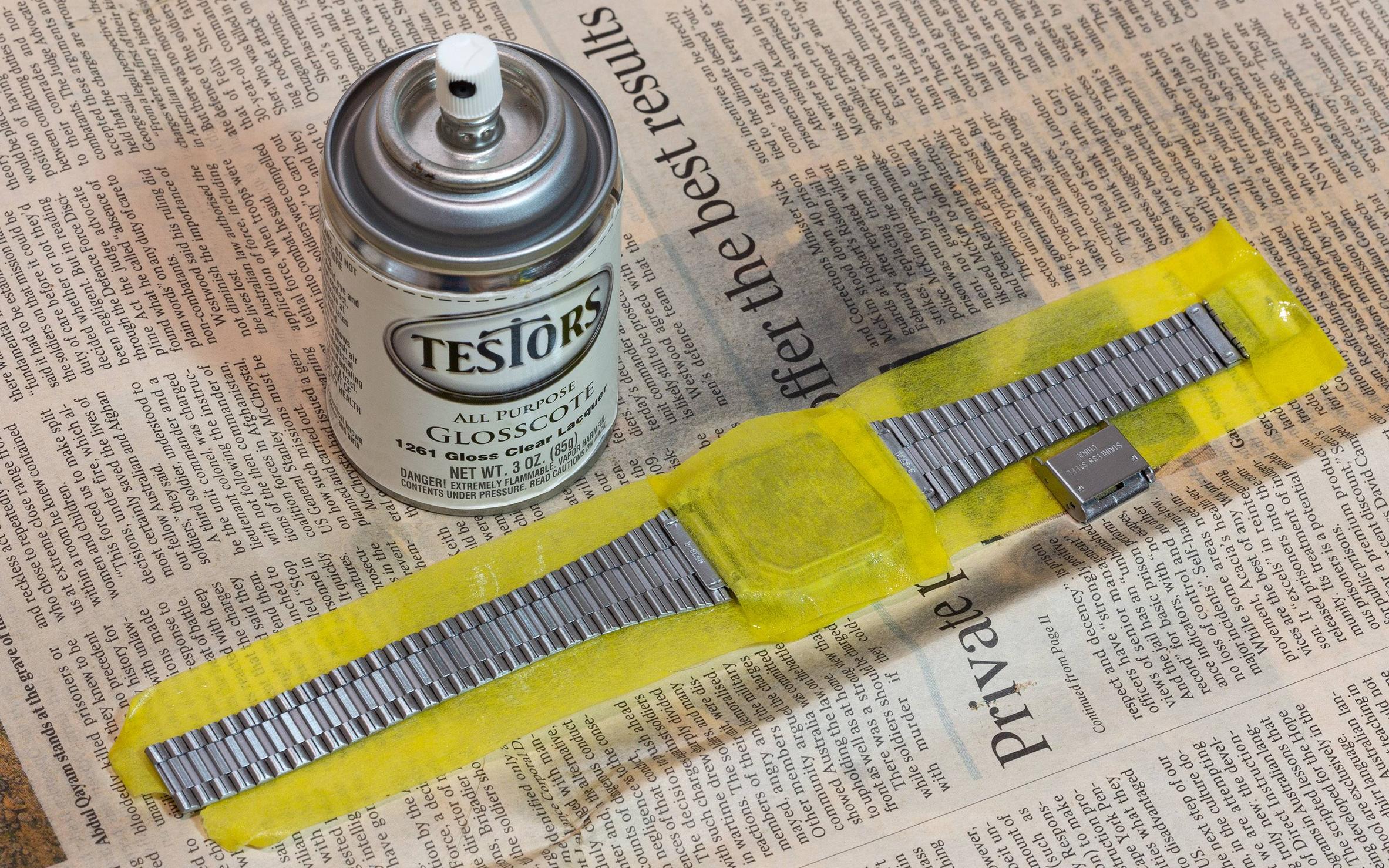 Just a coat or two of a clear lacquer. I used Testors Glosscote (typically found in hobby shops) mostly because I already had it in a spray can, and because it has the best adhesion (being solvent-based).

I also experimented with Tamiya Acrylic (X-22). Surprisingly, it felt a bit less flexible, but this may be due to thickness of the layer (I applied by brush) rather than the material itself. Generally, it would work as well, or almost as well.

Other things I tried or considered:

Liquid Silicone "Rubber", mentioned by barbecue in the comment, aucuparia and Stan.

Theoretically, it could be the best material: flexible (I've got the one with shore hardness 15, quite soft), pleasant to touch, strong, inert. It's only problem (and feature!) is poor adhesion: it just doesn't stick to anything but itself. 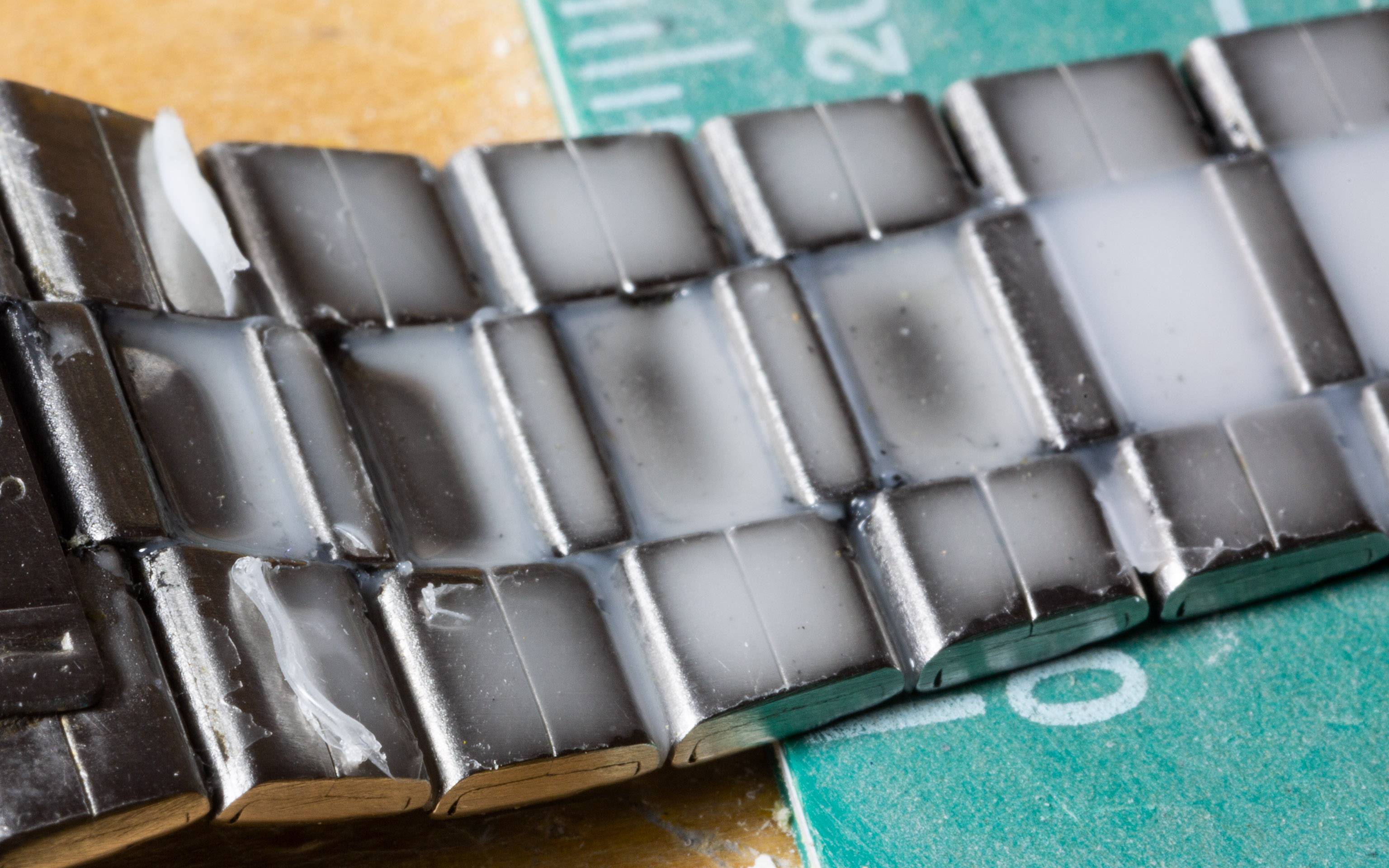 I tried slightly different thickness (visible here), but it made little difference. The only way I believe it could possible work is to make it properly thick (>1 mm), like a separate band suggested by many, peel it off and stick back on a contact glue. This is not very trivial at every stage, plus it creates a potential problem in the overlapping part of the strap (it can't be too thick and would have to be clear of silicone)

I haven't actually tried it, but my research shows that it would be too hard (literally). While acrylic can be made reasonable soft in a thin layer, the typical monomers sold for nail salons cure quite hard.

This would obviously work. But this solution is disqualified. It's a workaround rather than a solution to the problem. It's just too cumbersome to have a separate part. I wanted a solution to 'fix' the original problem, so that the watch could be used exactly the normal way. Besides, having a band would mean that I would always have to wear it (whether exercising or not): the added thickness would require adjustment to the position of the lock, which is not meant to be readjusted daily on this type of strap.

I would advise you to visit your dentist for your Lifehacks problem solution. Discuss the issue with the dental technician.

In a previous answer, Liquid Acrylic Monomer was suggested as a watchband liner which I think is in the proper direction; but, does not go far enough from a technological view. There is a difference with the material used for finger nails and the acrylic used in dentistry.

Dental monomer (the liquid) is MMA. It will cure super hard. It also has smaller molecules and when in the liquid form should not get on your skin. Nail salon monomer is EMA. It still dries hard but not nearly as durable as the MMA dental monomer. This nail salon monomer is safer for your skin (why they put it on your nails) and doesn’t smell as terrible, but In my testing, doesn’t have the same durability.

The EMA (nail salon stuff) is supposed to be flexible/breakable. That way if you jam your finger the fake nail will break off. Before it was illegal for artificial nails, they used MMA... and jamming your finger could result in the loss of your actual nail because the fake one ain’t breaking or peeling.

For the application, if you have a well ventilated space and skin protection, the dental monomer is (in my limited experience) much more durable and cheaper. Plus once fully cured, both are safe for skin contact etc.

Rather than pursue the technique of applying a flexible layer of some material to the bottom of your stainless steel watchband, flip the concept.

Now, You have the best of both worlds — a silicone body-friendly material that looks macho (or whatever it's called.)

EDIT: Change the kind of clasp for another on a suitable band. There are eight different clasps described in detail. Perhaps one of them on watchranker.com

Not the answer you're looking for? Browse other questions tagged adhesive or ask your own question.