How can I cut onions without tearing up?

Whenever I'm making something that has onions in it, I always have to cut the onion and go through tearing up and stinging eyes. I've seen on the internet that chewing gum makes you not tear up, but when tried that it didn't work at all.

I was wondering if there is a way to not tear up when cutting onions.

I would prefer not to use goggles because I don't have any that fit me and I don't want to buy them.

Here are some methods I use:

Putting your cutting board on the stove and turning on the overhead vent or microwave ventilation fan is supposed to redirect the treacherous eye-irritating gases onions produce away from your eyes.

This above article has how the article worked, as well. So that should help with research.

Cut the onion near hot running water or a cloud of steam. Steam from a kettle or pan of water will do the trick. The science here is that the steam will draw out the vapors from the onion, dissipating them.

How to Peel an Onion Quickly 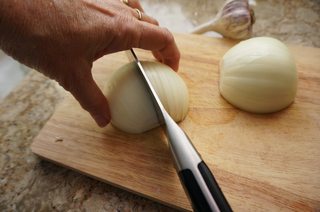 If it won't stop your tears at all, it will at least decrease their amount :)

Another tricky approach: put a blower near your cutting board, it could blow away anything that make your tears appear (even the onion itself, so be careful :D). 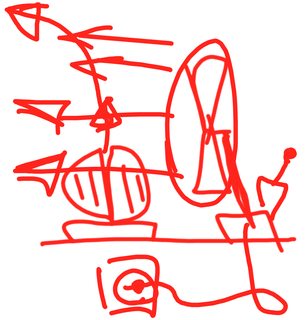 Also it'll cool you if you are too active onion cutter.

Why does it happen?

Preventing onions from making you cry requires understanding why they do so.

Onions contain amino acid sulfoxides that form sulfenic acids in the onion cells. Both the enzymes and the sulfenic acids are kept separately in the cells. When you cut the onion, the otherwise separate enzymes start mixing and produce propanethiol S-oxide, which is a volatile sulphur compound that starts wafting towards your eyes. The gas that is emitted reacts with the water of your eyes and forms sulphuric acid. The sulphuric acid thus produced causes burning sensation in your eyes and this in turn leads to the tear glands secreting tears. Thus you end up with watery eyes every time you cut onions at home.

Source: Why do onions make us cry?

Option 1: reduce the gas being emitted

Another option is to stop the gas from getting as far as your eyes. For example:

Option 3: Get the gas to go elsewhere

Finally, you can draw the gas away from your eyes by giving it better things to react with:

Put the onion in the freezer for 3 minutes. It works wonderfully.

I use ski glasses, the kind that completely wrap your eyes. You can get away with the cheapest ones if you don't practice ski.

Also the kind of protection glasses that you use to cover your eyes when sawing stuff may work.

As it does not reduce tears to 100% rinsing the onions in water before cutting them, and cutting on a wet board helps to reduce the effect of aliinase in converting alliin to allicin. Then the resulting production of syn-Propanethial S-oxide (the substance that makes our eyes tear) will be reduced, and it will go in solution with the surrounding water rather than with our tears.

There are many ways to do it:

I read this years ago in a Martha Stewart how-to book (hey, I was killing time in the book store), and it's always worked for me. I'll let Martha explain it... I copied this from: 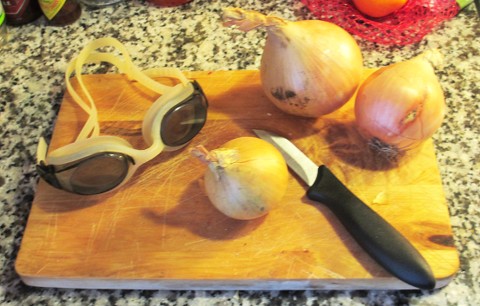 You said you don't have any, but you should be able to find a cheap pair of swimming goggles at any sports store or supermarket for less than $10. (I bought mine at a local swimming pool for €5.) Besides, if you like to go swimming, they'll also have a secondary use.

Really, any eyewear that's more or less airtight, like the ski glasses suggested by Alexandre C., should work just as well. Obviously, try to pick ones that are clear, rather than tinted like the pair in the picture (which were the only ones I happened to have at hand for the photo; I seem to have misplaced my usual pair of goggles). Still, in a pinch, almost anything short of a welding mask will do.

As far as fit goes, remember that most goggles are adjustable, and that for just chopping onions, you don't really need to have them fit very tightly. Just loosen the strap a little bit if it feels too tight, and it'll be a lot more comfortable to wear.

An alternative solution, if you happen to be cutting onions near a ventilated oven hood, is to turn the fan on. It will suck in the fine mist of onion juice generated by chopping the onions, and keep it away from your eyes.

Similarly, if you're cutting onions outdoors (say, while camping), simply try standing upwind, or a bit to the side. (Standing directly upwind may not be optimal, since the wind will form eddies around your body.) The wind will carry the onion juice harmlessly away. You can also try this indoors in front of a window, but that's a bit more situational — the wind might not always happen to be blowing conveniently out of your kitchen window.

This means that any solution will have to keep that sulfur compound fumes away from your eyes will help.

Peel the onion by making a cut through the outer layers (not too deep) and try to remove the peel without tearing it. If you are a bit messy, that's okay, wash the onion off under cold running water as soon as the peel is removed to get rid of the liquid that contains the sulfur compounds.

Cut the onion with the knife. Slice through it. You want to make sure you don't tear the cells of the onion. Don't hack the onion to death. You're not a serial killer. You want clean cuts. Thin slices, and then cut through the slices perpendicularly.

You should now have fairly small onion slices, and this may be enough for most cooking tasks. If you need a finer consistency, you can chop the onion.

If you watch this video, you'll see how this chef slices through the onion and never hacks at it -- even when he is making cross hatches in the onion. Notice he sharpens the knifes before cutting the onion. Notice the knife he's using -- a big sharp and very fine bladed chef knife.

Here is a method I have used for many years. While chopping, hold a piece of bread in your mouth so it sticks out horizontally. It will absorb those "little daggers" of acid which would otherwise end up in your eyes causing them to tear up. A slightly stale piece of bread works best because it is less likely to droop down letting the droplets pass by and irritate your eyes. I hope this method is not already listed since I didn't read all the answers. I apologize if it has already been mentioned.

Fully open all windows and find a place where the air goes from the cutting board away from your face and cut the onion there. It's a bit risky because wind tends to change direction, but if you're quick enough, you can cut the whole onion before the gust of onion juice reaches your eyes. The key here is to live in a windy area or have a powerful AC unit.

Just using a fan to blow the onion vapor out the window might not work very well. If you watch any video of a regular unmodified fan, you'll see that the air current it produces does not actually do a very good job of going in a single direction. This could result in onion vapor spreading all over the room you're in. Unless you modify the fan (place an array of cocktail tubes in front of it to straighten the air flow), it's not a guaranteed solution to avoid tears.

You can also find a large enough plastic bag that will fit the onion, the knife and your cutting hand inside, put a rubber band over the bag's open end on your wrist and cut the onion inside the bag. This keeps the tiny droplets of onion juice from going anywhere, but you need to cut carefully so as not to cut through the plastic bag.

Simple: always cut onions near or, if possible, under, the running exaust hood, no tears whatsoever!

Wetting the blade before starting to cut (and during) seems to help.

Another trick I've read, but which I've never tried before, is putting the onion in the freezer for a few minutes before cutting.

The problem with cutting onions is that a gas, partially made up of certain enzymes, is emitted by the cut onion.

See, for instance, this article by FoodRepublic:

In my experience, wearing glasses (or goggles, I'd assume) helps to mitigate this problem, as they block that gas that comes out of the cut onion.

Its a slightly strange one, but chewing gum whilst chopping an onion actually seems to work to stop you from crying. I have tried it and it does work, for me at least. No idea why though.

You can use something like gass mask or mask and snorkel set. This is similar to the swimming goggles and ski mask and additionally they will not only protect your eyes but also prevent breathing it in. Some friends has tested this and they told me it works.

What I have heard and also successfully tried is to make your mouth full with water and cut the onions while keeping it there.

It seems to work somehow and is similar to other solutions (wetting the board and knife, cutting next to steam or running water, chewing gum, ...) but not said in this form yet, I think.

I've found that using a high-quality, sharp knife is the best way for me not to get tears from onions. I chop them every night at home and have no problems but when away from home (using someone else's knives) I often get tears with knives that should probably be called bludgeons for accuracy. Use a razor blade like in Goodfellas!

Put them in the microwave for 10 seconds on high prior to the cutting.

Chew gum while you cut onions and you won't tear up. Works like a charm for me.

If you are in a restaurant, cutting the onions inside the walk-in freezer works. But it's cold.

Not the answer you're looking for? Browse other questions tagged food kitchen comfort or ask your own question.

7
How can I cut onions without tears?
-1
How to cut onion into small cubes?

19
How can I safely grate a small food item without cutting my fingers?
4
How to cleanly cut cake into even slices
4
How to sterilize/clean a cut/abrasion without causing pain
3
How to open oysters safe without oyster knife & glove?
4
How can you get the first brownie out of the pan without destroying it?
4
How to extract a cracker from a wrap with many crackers, without tearing the whole wrapping?
1
Making a comfortable noise-canceler
1
How can I peel vegetables without scraping my fingers?