How do I prevent batteries from leaking?

I have recently bought a battery powered LED lamp for use on a camping trip.

When I return I would like to have it ready for use at home when the power goes out.

I am concerned that as it will be unused for long periods of time the batteries may leak and ruin the lamp.

How can I store batteries in/with an inactive device for an extended period without them leaking?

An ideal solution will allow for a simple and safe procedure to activate the lamp, it will need to be performed in the dark. 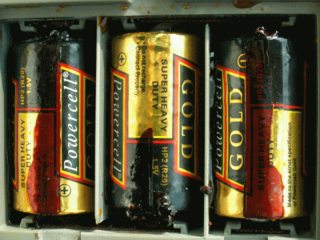 I have considered storing them loose on the shelf adjacent to the lamp but am concerned that they may:

Batteries have greater leak risk the more they are discharged. You might do the following:

Leakage from batteries, if they are not drastically defective or damaged, results from the normal electrochemical reactions inside them consuming the metal casing and opening a hole. Therefore, the first line of defense — how to prevent nearly all leakage — is to remove and discard discharged batteries. Since all batteries have some amount of “self-discharge”, this means you must change them periodically, but as long as they still have sufficient voltage to operate the device, you're probably safe.

If the device has a “soft” power switch, one which does not actually break the connection through the batteries but signals an electronic circuit to shut down, then for long term storage you should remove the batteries to avoid the extra drain of the controller waiting for the button to be pushed to turn on. Ways to tell:

If the device has a soft power switch, you can break the circuit inside the battery compartment. The simplest way to do this is to remove one cell (or all of them, but one will do). A fancier trick is to insert something thin and non-conductive, such as a thin piece of plastic sheet, between the end of one cell and the battery compartment's contact, then pull it out before use. (I wouldn't recommend paper, because I've done that and later found rust on the contacts — water absorption? acid paper? Don't know.) Suitably thin plastic sheets can be cut out of plastic retail packages or those little collar-stiffeners in dress shirts.

The battery chemistry affects the probability of leakage. I haven't found any reliable comprehensive sources on this matter, but here is the information I have managed to accumulate — if someone could offer some references I'd love to see them.

(If I were to use my first-hand experience only, I'd say “Alkaline batteries leak. Nothing else does.”)

All of the above said, the safest thing you can do is keep the batteries outside of the device. This prevents discharging of all sorts other than self-discharge, and allows you to keep the device and discard the batteries if they do leak. On the other hand, you have to insert the batteries with the correct polarity before use.

If you need to insert AA/AAA/C/D-style batteries blind, here are some cues for the proper direction you can find by touch:

I wouldn't worry about short circuits — it's hard for loose objects to make a complete circuit (as long as the insulating plastic shell around the cell is intact) in AA/AAA/C/D type batteries, unless you're doing something like keeping them in a box of metal parts. You can be even safer by keeping them in a bag (also handy for less mess in the event of a leak) or wrapped up in a bundle with a rubber band or cable tie (face them all the same direction).

I try very hard not to store batteries in a device that I am not planning to use within a week or so. When I put a device away, I put its batteries in a small Ziploc bag (e.g. a half-sized "snack" bag) and attach that bag with a piece of tape, a zip-tie, or a rubber band to the electronic device. That way, if the batteries leak, the damage is contained and doesn't damage my device. Also, they seem less likely to leak when they are side-by-side in a plastic bag and none of the battery contacts are touching metal.

If you are an old fan like me you will know that long time ago batteries were placed in protective (plastic) boxes inside the devices. [I have "Grundig" radio constructed this way, it had plastic box for its (6x SizeD batteries). They had leaked MANY times but that box always kept the corrosive leak inside it and it was easy to disconnect, take out and wash/neutralize the battery spills; then reassemble back. There are battery boxes sold (like from RadioShack ago), so you can buy one of these suitable for your battery size and accommodate!

Not the answer you're looking for? Browse other questions tagged electricity batteries or ask your own question.

1
How to prevent NiMH batteries from leaking?

14
How do I know how much charge a battery has left?
22
How do you test if batteries are good?
24
How to make my batteries work for a short time, one last time
2
Charge nickel cadmium (NiCd) batteries with a nickel metal hydride (NiMH) Charger
8
How can I re-seal hearing aid batteries that have been accidentally unsealed?
2
How can I replace digital alarm clock batteries without it losing the time and date?
1
How to prevent NiMH batteries from leaking?
3
Use two 2025 batteries instead of one 2032 battery
4
Question on Increasing Longevity of Laptop Batteries
0
How to test health of rechargable batteries