How do I open a bottle without a bottle opener?

There are times, when out camping, that a beverage is trapped in a capped bottle and I don't have an opener. How do I open the bottle, preferably with some item I might have in my pockets?

There are many, many options for bottle cap removal.

As mentioned but not really explained there's the lighter trick:

The key to this method is having a tight grip on the neck of the bottle so that your hand/fulcrum doesn't move when you apply force with the lighter/lever. You can apply this method with most anything you have lying around: keys, spoons, or even other beer bottles, not just lighters. A friend of mine used to do a party trick where he would open two bottles in one motion, its was a risky trick though he would usually spill at least one of the beers.

Another option is the counter top method: 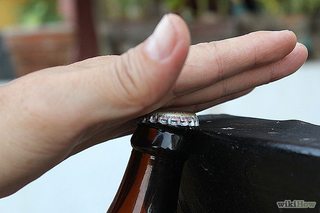 This method will tend to chip and scratch most counter tops so I don't recommend it. You just sit the lip of the cap on the edge of a counter or table and smack the top of the bottle. If you can find a surface that isn't likely to be damaged this method is pretty reliable though.

You can also pry the cap lose with a knife or key: 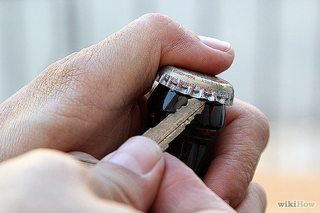 Again I don't really recommend this method, its tedious and slow, but it works. You work the edge of a key under the individual folds in the cap and pry them out. after going half way around the bottle the cap should come off easily.

See this wikiHow article for a few more options, most are more or less variations on the same basic principles described above using different tools, but it does give some pretty good step by step directions.

Anything hard with an edge can be used to lever the cap off with a tight enough grip on the bottle.

A ring on your finger will work too. It's a little tricky, but I got it to work on my first try.

Basically using the ring to grab the metal edges of the cap, and prying them away from the bottle. Get 3-5 prongs to loosen up and then go back to the center prong and put more pressure than before. This time it should (more or less) open right up.

17
How do I open a can without a can opener?
22
How can I remove the cork from a wine bottle when I don't have a corkscrew?
1
How can I keep sparkling beverages the fizziest as possible?
3
How to open oysters safe without oyster knife & glove?
12
How can you estimate the fill-state of an opaque bottle?
8
Open a bottle without bending the cap
1
Keeping Canned Drinks Cold without Using Ice or Electricity
4
How do you open a bottle like this?
3
Fastest way to open a shaken bottle of soda without spillage