How to re-form a bent paper clip?

I often bend standard paper clips into all kinds of shapes for various purposes: 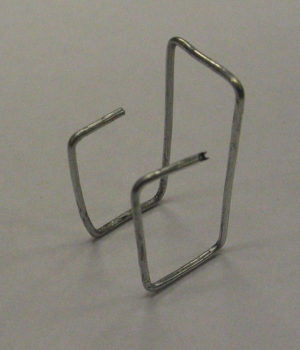 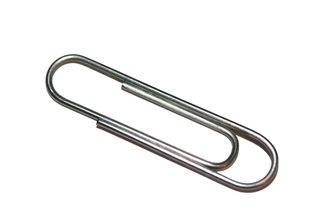 Note that I do not have needle-nose pliers.

You can never fully return the paper clip to it's original state:

Having pliers would help you come close, but how close? Such is subjective. Maybe you can make a workable paper clip again, but the question asks how to restore to the original shape, with a picture, which is impossible without special equipment.

Secretly, a metal is a set of grains of regular crystal lattices which are stuck together -- both internally and along grain-boundaries -- by "metallic bonds." Metallic bonds involve sharing electrons across the whole crystal, which is why metals conduct heat and electricity so well -- some of the electrons are somewhat free to bounce around the whole metal.

When formed the grain boundaries form tight connections -- think of two surfaces that are flush next to each other. As you move them, mostly you stretch the individual grains via "elastic deformation", which returns roughly to the same place. But if you move it too far, grains "slide" along these boundaries and sometimes even "break" into two new grains, so that they don't return to the same place -- this is called "plastic deformation."

Plastic deformation usually does a couple of things: it makes the thing more brittle so you have to handle it more gently before it will outright crack and break; and it makes the thing stiffer, so that you have to push it harder to move it the same distance. This happens because the grains are not as well-aligned as they used to be, there are now "gaps" between the grains, you've taken a subatomic harmony and created discord. Something microscopic has happened.

So, if you just want to try to bend the paperclip back, you will need a combination of patience and luck, as you're going to be damaging the subatomic structure of the metal even more when you try to reverse it. You're not perfect and you can't perfectly undo the damage you did. So be as gentle and precise as possible and maybe you can get some approximation of the original, but the damage will remain inside that metal lattice.

The only good way to repair this subatomic damage is called annealing. It is a really easy idea in principle: raise the temperature of the object just shy of its melting point, so that it doesn't lose its apparent structure but all of the grains are beginning to flow into each other, then let it slowly cool down. The speed at which it cools down will control the size that the new grains can grow -- if you immediately dump it into cold water, for example, then the random vibrations of the atoms will immediately get "frozen" with very small couple-of-atom grains with a lot of random distances between them, which will be very brittle and stiff. But if you try to cool it down as slow as possible, the grains will get very large and connect over very flat surfaces, so it will be much more ductile and supple, healing the damage you've done.

You may be able to achieve these results with a gas flame -- propane and butane typically burn just under 2000°C, most steels melt somewhere higher at 2500°C. If you really want to do this, a good crucible would help; you can put the paperclip in the crucible, heat the crucible up to around 2000°C for a few minutes, and then put the crucible on a wire cooling rack; then as the crucible gently cools the paperclip will hopefully be able to repair some of this microscopic damage -- the more the heat capacity of the crucible, and the worse that it's capable of radiating heat, the slower that paperclip will cool down and the more damage that can be healed.

Not the answer you're looking for? Browse other questions tagged office-supplies or ask your own question.

20
How to cut paper without scissors?
4
How to stop paper curling up
6
A trick to make bulk erasable handwritten notes on traditional paper and in books?
0
How to avoid/stop pressurised ballpoint pen leaking?
5
How can I use an eraser without smudging?
5
How to hold together large packet of paper
3
How do I staple a few sheets of paper in the middle using a normal stapler?
0
How to get pens working after they've been dropped
3
Damaged Gears from a Paper Shredder
2
How to mend a worn-out notebook cover, and replace it