How do I prevent/fix holes in the front pockets of my jeans?

If you have already seen my other question regarding clothing you may think I look like a bum. But I actually don't and I also don't care what you're thinking.

The problem is that I get a hole in the front pocket of my fairly new jeans. The fabric wears off on the inside of the pocket, the one touching my thigh, until there's a hole. This doesn't bother me to much, because I'm always carrying my wallet and my keys in that pocket (the keys are on the outer side, so the wallet prevents the keys from getting tangled in the hole/worn off fabric but it still rather seldom happens). But when it happens it's really annoying! I'm trying to unlock a door and start to pull on my keychain (picture below), which is connected to the belt loop of the jeans with a carabineer, but the keys are tangled in the hole/worn off fabric and I need to reach into the pocket and untangle the keys. 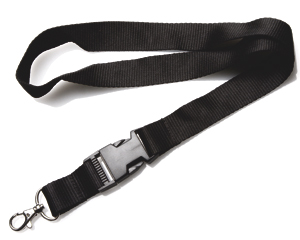 It only happened with that pocket (the left one - if that really matters) and I'm guessing because of the sharp edges of the keys - I actually don't want to change the habit of carrying my wallet and keys in the left, and my cellphone in the right pocket. But if it's the only solution I'll have to.

With one pair of jeans, I've already tried to replace the whole pocket with an old kitchen cloth. It seemed to work, but washing once already resulted in a hole at the bottom of the pocket, where the seam is.

My jeans really are not that old and I don't have holes in other parts of the jeans, so I don't want to throw them away, just because there's a hole in the pocket.

So my questions are:

Front pockets of trousers are usually made of soft fabric that will be much less resistant to mechanical strain.

There are two instances the pockets get holes:

1. The fabric becomes worn out

2. The seam gets loose

The obvious thing to prevent this from happening is to keep all sharp edged things out of our pockets. This is true for coins, keys, lighters, swiss army knifes or other stuff real men love to carry close to their legs.

Now being a real man, I can't think of a life without all these items im my pockets. Therefore I came to the conclusion I need to put my keys into a special bag or pouch. This could be anything from a small self-made linen pouch 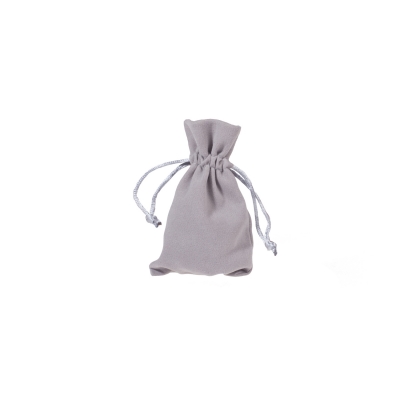 to a commercially available leather bag with a zipper.

These are not really cool fashion items as we know them from our daddies or grand-daddies (they might know why): 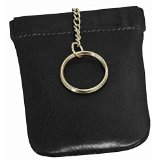 With some search effort we may howver even find a design that may be acceptable for us: 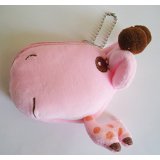 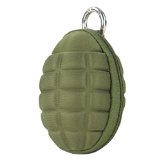 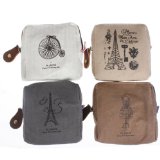 Images from a random search at Amazon

Preventative maintenance is the answer - when you buy a new pair of pants, put an iron-on patch on the inside of your pockets. I realize that most of us don't think about worn spots on a brand new pair of pants, but if you can put a patch in, then the patch receives the wear, not the pocket. Also, I use a large-ish patch, folded in half, with the folded edge fitting into the bottom of the pocket. Of course, you can also repair a hole with an iron-on patch also.

You could put your keys in a Keybone or similar device.

They come in a wide range of designs and colours, and many have loops or hooks for attaching to a lanyard or keychain. 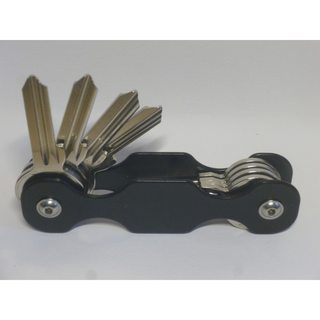 The holes are definitely from the keys … happens to me since years :D As a solution, and prevention of future damage done to the poor trousers, I started wearing the keys on the outside instead of putting them into the pocket.

You can even do this with the exact keychain that you have, just switch its ends:

This way, the keys will hang loosely outside the pocket. I like that wearing comfort is much better than with the keys inside, esp. when cycling, walking longer distances, with a bit tight trousers, or with a lot of keys. Optics are fine at least for the people wearing the upper body clothing over their trousers.

Now for the rather hilarious way how I found this "solution": it was just a necessity since the pocket holes would get so large that the keys fell through. I had secured them beforehand with a keychain in case that happens, to not lose them, but then they'd fall inside the trousers nearly to my foot, and get entangled when pulling on the keychain.

Not the answer you're looking for? Browse other questions tagged clothing keys or ask your own question.

22
Is there any way to fill in a hole in my shoe - so it is waterproof?

22
Is there any way to fill in a hole in my shoe - so it is waterproof?
12
Keep from Wearing Holes in the Toes of My Dress Socks
12
How to avoid the splitting of my jeans in the crotch area?
17
How Can I Fix a Broken Pant Fly?
2
How to prevent keys/keyrings from snagging on clothes
0
How to reduce the insulating effect of new socks by "breaking them in" more quickly?
1
How do I find a casual wear tailor?
1
Sweat absorbing ways to improve cosmetic appearances of garments
3
Spastic cerebral palsy: Tools to help wearing pants
2
What can I use to attach bulky things to my keyring?