What is a temporary solution for a damaged car body?

What can I use to protect the scratched part from getting rusty? I am seeking a temporary solution for a week or two till I have the time to take it to get repaired. 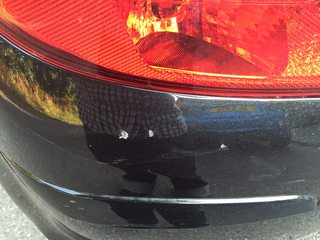 A small dob of grease over the affected area will keep water off.

It is easily removed come the time of a proper repair and does not run the risk of further damage from overly aggressive tape adhesive.
The grease will stay put during rain.

The grease will collect road dirt as you continue to drive, but this sticks to the surface of the grease and comes away easily when needed.

The damage pictures appears to be on a bumper which is made of ABS plastic and therefore won't rust.

If it were a metal panel, a temporary fix is a dab of nail varnish.

Duct tape to the rescue!

If we're talking a week or two, then you are running relative low risk of getting rust. If on the other side you want to be sure, then you need to protect that area from getting wet and have access to air, which are needed for it to rust.

Using a bit of duct tape to cover the scratch should suffice to keep it dry and limit air access. You can even get black duct tape, if you are worried on the esthetic aspect.

Using tape (or grease as suggested in another answer) are quick fixes, which are easily reverted. Using glue or nail varnish (as suggested in some of the other answwers), is slightly more permanent and not so easy to remove when you want to do the real fix later on.

In essence, the main idea in most of the answers so far, is to cover up the affected area. But be careful that whatever cover you are using, it won't create extra work when you want to do real fix (i.e. having to sand away the previous fix, when an easier wash operation could have sufficed).

I know of a person that put wax on a spot of rust to prevent any more water/oxygen getting to it. He didn't get back to it for a long time, but when he finally did look at it again, the rust hadn't spread. This was, if I recall correctly, in a protected area of the car, so might not apply as readily to external damage. Could be a quick fix for someone, though, so I thought I might mention it.

If your bumper is made of plastic there is no chance of rust. Rust is the metals oxidizing.

If it is metal a few layers of PVA glue will protect the metal and not look as bad as tape or grease.

I would use a can of spray primer, as it would not need to be removed when you do the repair.

Instead of wax you can find a crayon the same color as the car . It is easy to use!

20
Removing ice from the windshield
8
What can I use for an improvised ice scraper?
5
How to clean dried blood and bone from the car grill
4
Removing / Minimizing a car dent?
9
How do you get into or out of a car during rain without getting wet?
8
How do I dry out the inside of my car?
3
I spilled yogurt on my car leather seats. What is the best way to remove it?
5
How to protect a car from hail?
0
Clean Automatic Transmission Fluid (Oil) from Car Carpet
3
Night driving issues