How to turn off the lights without getting out of bed?

I get into bed because I am tired. When I am tired, I don't like to get out of bed. That simple.

This Rube Goldberg shows one simple way to shut the lights without getting out of bed:

Is there a simpler way to accomplish this burdening task without getting out of bed?

Although my switch is a normal flip switch, I'm interested in hearing solutions for all types of switches since I am sure others in the community have the same issue with different kinds of switches.

However where is the fun and lifehack of this solution? Enter the line remote switch: 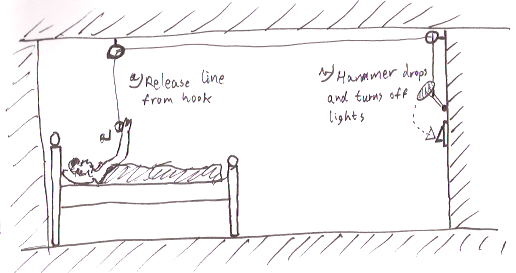 If you add a few hooks/rings you can run a line from the light switch to your bed, and in the configuration shown you would detach the line from the end hook releasing the hammer which falls down and turns of the light!

Variations over this if you have different kind of switches could easily be made. If you have the ones with a tap sticking out you could possibly make it go both on and off using the line and a sliding mechanism close to the switch

Use a long stick. You might have to build up your arm strength to hold it depending on how far your stick will reach.

If the switch you are flipping is a toggle style, then moving the remote end of the stick will change the switch.

If the switch you are flipping is a rotary style (think lamp twist switch), you can use tape attach the stick to the switch. This method may leave the stick where it is a hazard to passersby. Mark your stick responsibly where appropriate.

If you don't want to just turn off the light and then get in bed (as for instance you read a bit before going to sleep), just get a lamp that clamps or screws to the headboard, so that you can use that instead of the room lights. Been doing it for decades, myself.

Simple! You're looking for Home Automation. It's rather all the rage right now, as "The Internet of Things" becomes the buzzword for marketers over the next couple of years.

But it's not really that new; I remember having a system in the 1970s when I lived with my folks where they had a box with several buttons on the bedside table and could turn lights and certain other appliances on or off with it. In those days, and assuming I'm recalling it correctly, these systems worked by sending an RF signal through the home's electrical system. Here's a photo of a device not unlike my parent's: 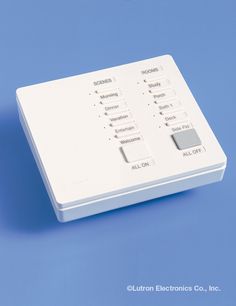 With the advent of widespread networking protocols, cheap microprocessors, and cheap (!??!) software developers (perhaps I should say "the ubiquitous development of software" instead, because not ALL programmers are as underpaid as I am), you can now control more devices, perhaps, soon, virtually ALL devices in your home and garage, from your laptop or smartphone.

Here's an example of someone who's "rolled his own" Bluetooth solution: https://www.youtube.com/watch?v=gam1PqXju6Q

But there are plenty of commercial options available. So, you should be able to plug your phone in to charge overnight beside your bed, hop in, press the screen a few times, and "LIGHTS OUT" ... :-)

Instead of using remote controls as suggested in another answer, you could also add some sort of delay mechanism to turn off the lights. This could be in the form of timer delay switches which can be tuned to shut of the light after a given amount of time (enough for you to get into bed). These switch could either be built into the switch by electricians, or you could use the 'kitchen safety' variants and put a lamp instead of your kitchen appliance into it.

But yet again, where is the fun and lifehack of this solution? Here is a suggestion for a DIY delay switch solution:

The principle here is that you build a little bracket around the light switch, which are constructed out of three main parts:

In my drawing I've used a water bottle with a hole in the side, and some mug to receive the water. Normally water and electricity is not a good combination, but this setup should be safe as long as you don't have more water in the bottle then can fit into the receiving container.

You could of course also switch to sand or some other media, but water is the simplest to describe and to make! When you want to use this device you turn on the light, and insert the bottle with enough water to give you a proper delay.

Some years make it was very fashionable to use clap on/clap off lights. This could possibly also be an interesting variation over the remote control light option. (That is as long as you don't have a partner which would be awakened by you clapping... )

I used a LED flashlight with light sensor like this in an adjoining room to my bedroom which I had to cross to get to the batroom. When triggered it stayed on for approx 30 secs, which gave me enough time to cross the room. In addition in case of power failure, it would light up for a minute allowing me to find the light and use it as an emergency flashlight.

Get someone else to do it for you, (e.g., spouse, significant other, child, parent, pet, etc.). How you train this being to perform the task is way beyond the scope of this question.

My solution is to use a lamp with a Tabletop Dimmer, for my lamp that is not within reach of the bed. I bought one for my grandad when he was 95. The device works like a 'switch extension'. It plugs into a wall outlet (mine is operated with a wall switch, which I turn off when I'm not in the room), & the lamp plugs into the back of it. For folks with poor eyesight, like me, it can be dimmed to provide just enough watts to act as a nightlight.

Not the answer you're looking for? Browse other questions tagged bedroom light or ask your own question.

13
How to read in bed without upsetting my wife?
9
What can I use to keep my daughter from falling off the bed?
3
how do you easily turn a flash light into a lamp
6
How to turn on the motion sensor controlled light when you're in the toilet?
9
How to prevent people accidentally turning the lights off from leaning on the switches?
5
How to clean urine stain out of a bed mattress
1
How to get fitted sheets on bed?
8
How can I use my laptop, while lying in bed, without it touching my body?
9
Tips for getting out of bed quicker in the mornings?
3
Make a home massage bed alternative without drilling a hole in the bed?