How to find my way without a compass?

We went for a tracking camp a week ago. While collecting wood for a fire, I discovered that I was lost. My mobile was not receiving a signal and I felt hopeless. If I could only only have found the north side, I could have found my way back. Luckily, my mates discovered me after a while.

Is there any way to figure out your current direction when you have lost your way?

This article pretty much explains how to build a compass with everyday things. Here is a summary with some additions:

Let a magnetised metallic "needle" float on some still water.

You can orient yourself without technology in a number of ways:

If you are lacking a map, simply knowing your orientation will likely not help you much. Look for landmarks or other points of interest in order to help determine which way you should head to find your way back. Any stream that you may have crossed is a good starting point since they are usually quite long and can divide the area into "home side" and "lost side". If you crossed a stream only once, you're not on the "home side".

Here are couple of handy Things: 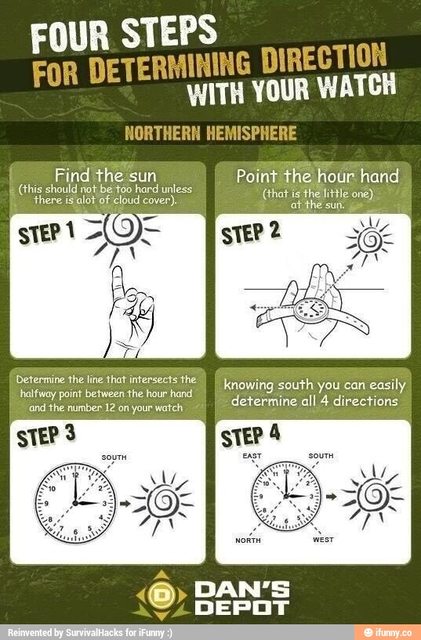 When you put your fingers between the sun and the horizon you can count the hours of daylight left: 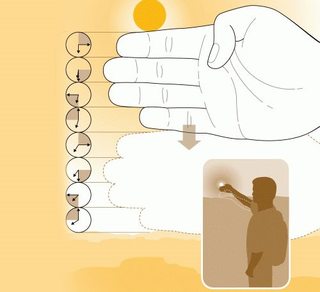 Your watch and the sun make a perfect compass!

First, you need to make sure your watch is set to normal/winter/non-daylight-saving time. (You don't have to actually change its time, just keep in mind that during the summer months, you might have to subtract one hour, depending on your country's time politics...)

Then, hold the watch flat and let the hour clock hand (or where it would be without daylight-saving time) point to the sun.

After that, look where the 12 o'clock label points.

If you now take the direction in between of 12 o'clock and your current clock hand's direction, this is the south!

The guide for lost people.

You are moving (by foot, by car, by whatever) through the landscape until, well, this area does not look right....where am I ?

How do I find directions (north and south) ?
I must admit that I find the idea of building an own compass not so hot. The problem is: Commercial compasses are calibrated against deviation (disturbances of the magnetic field), so your self-built compass could easily deceive you. Even good compasses can be deceived if you are in the vicinity of iron (iron ore). Another problem is that the compass has a magnetic declination, an angle between true north and magnetic north: 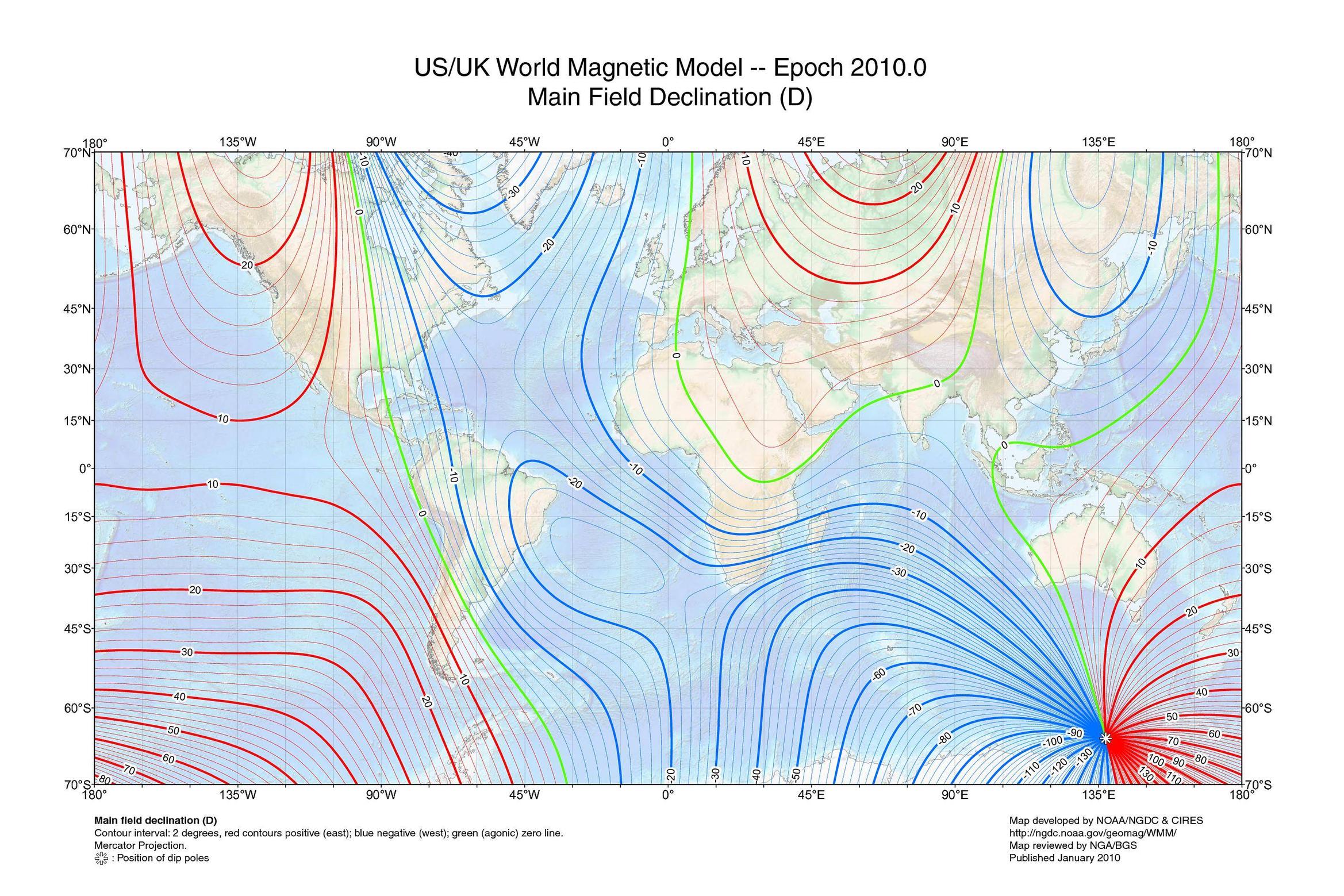 The tips using indicators like moss on trees etc. are very uncertain indicators. Do not use them.

Better is the sun and the stars: They cannot show the wrong direction. Find Polaris to find north and the Southern Cross to find south. If you have forgotten how both look: aim at a star at the horizon, it will normally move. The more it is goes exactly vertical up/down, the more it is near East or West, if it is going up, it is East, if it going down, it is West.

The method of ByteCommander with the watch is a thumb rule. It works because we defined noon as the time when the sun is at its highest point and in this case the sun is always exactly in the south/north. Because we have DST and time zones be aware that the local sun time can have a considerable difference (one or even two hours with DST) from your watch time ! The sun is moving around in 24 hours while the clock moves two times in 24 hours, so we need to half the angle between 12 o' clock and the hour hand.

North and South could be also found exactly with the sun if you have time. You need at least know at which hemisphere you are currently, north or south. Stick a stick into the ground and draw a circle around it. Mark where the shadow crosses when it lengthens and when it shortens. The exact middle between those points and the origin of the stick marks south (northern hemisphere) or north (southern hemisphere) !

The following tips assume that your GPS device is broken. It is quite seldom, but people unlearn navigation if they are too dependent on the device.

I am in the wilderness, but I have a map.
Stay where you are and look for outstanding points (mountain peaks, railroads, roads, rivers). If you have a compass and can measure the direction, the better. You simply find out the direction for the line of sight from your point for two outstanding points, their crossing is your position. If you do not have a compass, mark the positions of the points with something (needles would be ideal). Hold the map steady and sight out with one eye so that outstanding point and map point are in a beeline. Mark the line of direction without moving the map and move your eye so that the other point/map point are in line. The crossing point is your current position.

If possible, try to get as many points as possible. Maps could contain errors, sometimes even deliberately to expose if someone makes a copy. The map could be outdated. It could contain buildings which have been demolished.

So with a map you need to make an effort to get lost. You may walk unnecessary ways, but getting lost is pretty hard.

I do not have a map or there is limited visibility (sandstorm, fog, inside wood)
If you have only limited vision, you are in trouble. If possible, it is better to stay where you are if it is likely that the condition will improve in time. If you see that something is up (The sight worsens, a cloud is coming, it begins to rain or snow) try to locate yourself if you are in unknown territority and prepare to rest.

If you are in a blizzard, a whiteout or dense fog moving without orientation is asking for suicide. No joking.

If that is not possible, you have some options if limited visibility is available.

Strategy 1: Follow a trail. It does not matter if it is a river, a road, a railroad, a line of powerpoles, whatever. If it is made by humans it will lead to humans. If you get to a crossing, choose the path which is bigger or has the most visible activity. Follow the footsteps. The "direction sense" of native people is simply the ability to follow the own or other tracks back.

A river is not made by humans, but humans need water, so towns and cities are located on rivers. Follow the river downstream (In case you are in a desert, follow upstream ! Rivers are likely to ooze away).

Strategy 2: Restore sight. If you are on flat ground (not mountains !!) and you have a trail available (remember rule 3 ?), get higher. You not only increase your sighting distance, sometimes you are able to get out of the visibility limitation. Fog is most dense at the ground. You can climb an outstanding tree to see out of the wood (careful). Moving higher on mountains is generally a bad idea, because you are moving away from possible help.

Strategy 3: Perk up your ears and eyes. Human activity is often noisy or visible. You have noise of machines, trains, road traffic. If you can locate noise or light, move to it (Faint lights is swamps are not such a great idea, see will-o'-the-wisp). Do not be surprised if they are absent when expected during fog or snow or in a wood, these circumstances can dampen noise strongly.

The following tips are for use inside cities.

Move along the road. If you have a crossing, switch to the bigger road. If it is indicated that you are moving away from the center (less noisy, sign), revert direction. I do not know if it works for rectangle grid cities like in the USA, but it will work for most European cities.

I know where I am but I lost my partner or my group.

Move to the last safe location where you were together (In case you were visiting an area with a high crime rate). Make this the standard procedure for everyone so you can count that everyone knows what to do.

The tricky one: Two or more people want to meet urgently but are unable to communicate their meeting point or time.

Meet at the train station (if it is missing, the most important point in the city) at either noon or midnight at the main entrance. If the day is missing: Sunday. If the month is missing: February. If the city is not known: The capital. The strategy is simple: Use something which stands out as location or time.

Things you'll need: a needle, a bit paper, and some water.

Rub the needle on your hair and pour some water on a cup. Place the bit paper on the surface of the water. Now place the needle on the paper. The needle now turns and shows the north direction.

The simple way is not to become lost in the first place. Stay aware of the shape of the land around you, and keep landmarks in your head. Where is the sun? Did you go up or down a slope from your camp? And so on...

Unless you are on bare rock or hard-packed dirt, you'll have probably left some footmarks on the ground, so back-track on those. If you walked through deep grass, you'll have bent it down and left a track. And so on, with variations depending on your local terrain.

If you're in the northern hemisphere and it's snowed enough in the last few days to where snow is sticking to tree trunks, if the snow is predominantly on one side of the trees, that way points north. Since the last snowfall, direct sunlight has melted snow on the other sides of the trees.

If you are in the southern hemisphere, the snow side points south.

I agree with BC if the ice is completely melted, you can get its main idea where the south is if a large tree or a mountain can be a building or a building for the city. If you have 1200 feet in particular, then the ice will melt, I really know where you are before the storm hit or there are some signs where you are. If there is a big storm, if you can survive during this storm especially during the storm and you are waiting for long time and electronics. Power and solar charger will not help. I also find a map physically, whereas marks on electronics are targeted and indicated at the point of view of your expected route.

Not the answer you're looking for? Browse other questions tagged substitute-tool camping or ask your own question.

25
How can I safely trim my fingernails without a fingernail clipper?
25
Is there a way to erase pencil without a standard eraser?
68
Is there any way to kill a fly without a flyswatter?
11
What is the easiest way to put on a bracelet ('S-hook') pin with one hand without anyone help?
8
How can I repair an axe head that has been separated from the Handle?
6
How to light a match?
6
How can I drive a tent peg into gravel?
12
Cheap way to hang a poster without frame
6
Alternatives for when you just can't find your bones?
3
How do I open this watch without special tools?