How to remove the bhoosa [chaff] from the phool jhadu [grass broom]?

Here is the picture of phool jhadu. That is the kind of broom used in middle class households in India. 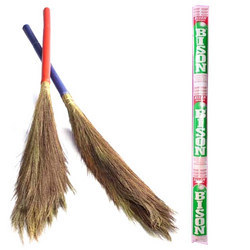 The problem is that the new broom of that kind contains a lot of bhoosa (which Merriam-Webster defines as “the broken straw and husks from the threshing floor used as fodder: chaff”). Small particles of bhoosa can be seen when you shake that broom.

I tried placing that broom in a water bucket for 6 hours. A lot of dust particles were floating on the water but still that broom contains a lot of those particles.

What should I do now?

Basically broom grass crop gets ready to reap in January. If the farmer cut it late, say after 15 February of every year, then seeds starts coming on it which become quite fat in March-April crop.

Broom manufacturers use March-April material while manufacturing broom because the price of that broom grass is quite less then January grass. Only a few reputed brands like Tiger Brand, Vip jharu delhi, Broomsindia etc use best grass from which you don't have to clean broom / broom bhoosa (chaff).

So go for quality instead of dipping broom in water or keeping it in front of fan, and don't apply your comb on it.

I don't know how big a phool jhadu is, but perhaps you could use a large hair comb on it. I imagine you would have to comb sections of it separately, like combing your hair (rather than being able to comb it all at once). Then shake it or hit it against a wall to get the remaining dust out.

BrettFromLA♦BrettFromLA
11.2k66 gold badges2626 silver badges4545 bronze badges
Add a comment  |
2
Want to improve this post? Provide detailed answers to this question, including citations and an explanation of why your answer is correct. Answers without enough detail may be edited or deleted.

I usually beat the broom against the wall (outside house) when the particles get separated. Try this for a couple of days and it should be OK.

You could try using a large electric fan to blow the dust particles away.

This is best done outside your home or building or you might have to re-clean the building... Since fans cool, you don't need to worry about the straw catching on fire. The strong wind should efficiently blow away all the dust in 10 to 15 minutes maximum.

Don't hit it against a wall, the straws break and the broom fitting becomes weak.

Just place a newspaper beneath the broom and with your hand just rub the broom. Almost 80% of husk falls out

Not the answer you're looking for? Browse other questions tagged cleaning home or ask your own question.