How do I remove a Daddy Long-Legs egg sac without breaking it open or killing the spiders?

Daddy long legs (Pholcus phalangioides) are fond my bathroom. I can normally coexist with them; they don't disturb me, I don't disturb them, and they're too much of a pain to move when they're on the ceiling.

However... sometimes, one comes in bearing an egg sac. 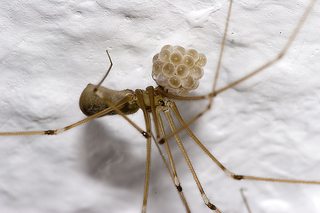 This poses a much more significant annoyance. The last time I tried moving one of these, it exploded into about three dozen spiders. I fled. That many spiders is too much for me. One or two I can coexist with. 28 like there were last time? No way in hell.

I don't want to kill any spiders, though. I'd feel worse about that than living with them while they move out into the great beyond. So, that being said...

How do I move the egg sac without:

Capture the spider carrying the egg sac in a clear jar or tub, like those you buy cold things in at the grocery store or a medium-sized Chinese restaurant soup takeout container (after cleaning it out). I recommend plastic instead of glass so that it won't break if you make any sudden movements etc.

Slide a paper under the container as it's against the wall/ceiling/floor, so the big spider climbs on to it with the egg sac.

Then put something stiffer (like a thin hardcover book or clipboard) under the paper to help keep it flat against the bottom of the jar, and carry the mother and her sac all together outside. Set it all down, tip over the jar and if necessary gently tap to encourage the mother to climb out.

Use a pencil or other small stick to gently poke at the female spider so that she crawls away from the eggs. Her self preservation should be more important to her than defending her eggs sacs.Then you can reach in with some tweezers or perhaps even twist and wrap up the eggs and some of the webbing on the end of the pencil or stick and pull the eggs out of the web.

Many spiders which are carrying their youngsters will drop them if in panic. Basicly you don't want that to happen uncontrolled.

Catch the Spider with a glas and a piece of paper, just like you would catch a bee or something. Now you can use a pencil to make the big one angry. Be annoying, until the spider attacks the pencil. At one point, the spider will release the eggsack.

Now you can pull out the large spider with your pencil, and put the eggs whereever you want to (outside?)