Frequently I make a trip to a near by city that takes 6/7 hours by public transport. This includes the ferry so there is some rest time. The trip is usually for 3-6 days so it's not very long. Since the travel time is so long, and the stay is relatively short, I'm looking for tips to make my bags as lite and easily carryable as possible.

The trip involves one or two buses, then a ferry, then a bus, then a subway.

I have a small backpack, large backpack, duffel bag with wheels, and a laptop case. I normally bring one or two of these and I've been experimenting with what the best combination is. Any suggestions? I find the duffel bag wheels are too small and falls over when I take my hand off the handle.

Also, since I use most of these bags for other things, they aren't exactly the cleanest. Do people normally pack there clothes into other bags before putting them in the main one? For example I use grocery bags for my clothes and then put them into the main one.

In my experience your best approach is to buy a set of packing cubes. These are just mesh bags that don't look like they do anything: 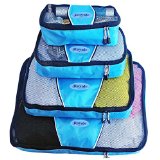 They aren't airtight and you don't squish down on them as you pack or anything like that. But still, they let you take far more and stay organized and clean. Say you take the medium cube, and you put into it two folded shirts. It looks full, but you put a third shirt on top and it fits. Strange. So you put a fourth shirt and it also fits. And a fifth. You're not deliberately compressing but stuff just fits.

Then you take a smaller cube and you put your socks, underwear and such in it. The same thing happens, it seems you can always fit more. The advantages of the cubes are:

You may find you can fit 6 days worth into the small backpack. I fit 5 weeks worth into a bag that is small enough to be an airplane carryon.(It wasn't 35 outfits though, I did laundry on the trip.) In the same bag I also have done a 9 day trip with business and casual clothes, so 11 outfits plus swimsuit, sunhat and warm sweater. The cubes made the difference.

I recently read and viewed some videos about ranger roll, which I found somewhat fascinating. In the really extreme example for a day or two trip you could do:

The above procedure is not exactly a ranger roll, but it makes a neat little bundle you can throw into your back pack, and you'll have most of what you need for a day or two.

The proper ranger roll use the garment itself to wrap around the roll, and can be described as the following:

Sorry, if my explanation is not clear enough, but the gist of the idea is to roll the garments into rolls which self-lock (either by using a sock as in the first example, or the garment it self doing a proper ranger roll). You now have a few rolls, which you easily can fit into whatever back pack you choose to use.

Regarding back pack, I would go as small as possible, and I had one with a laptop compartment in the back, and a few large rooms in front of that. That way I could have the laptop in the back, all clothes in the first large room, and then all the tidbits (music player, wallet, keys, a little food, and so on) in the front compartment.

Not the answer you're looking for? Browse other questions tagged travel or ask your own question.

12
How to Pack Dress Shirts / Clothes for Travel
9
Hacking a proximity card (Oyster card) for legal use
8
How to fold clothes to save packing space for travel?
3
Extra shoes for Inline Skating
1
General tips for several long flights within a short period?