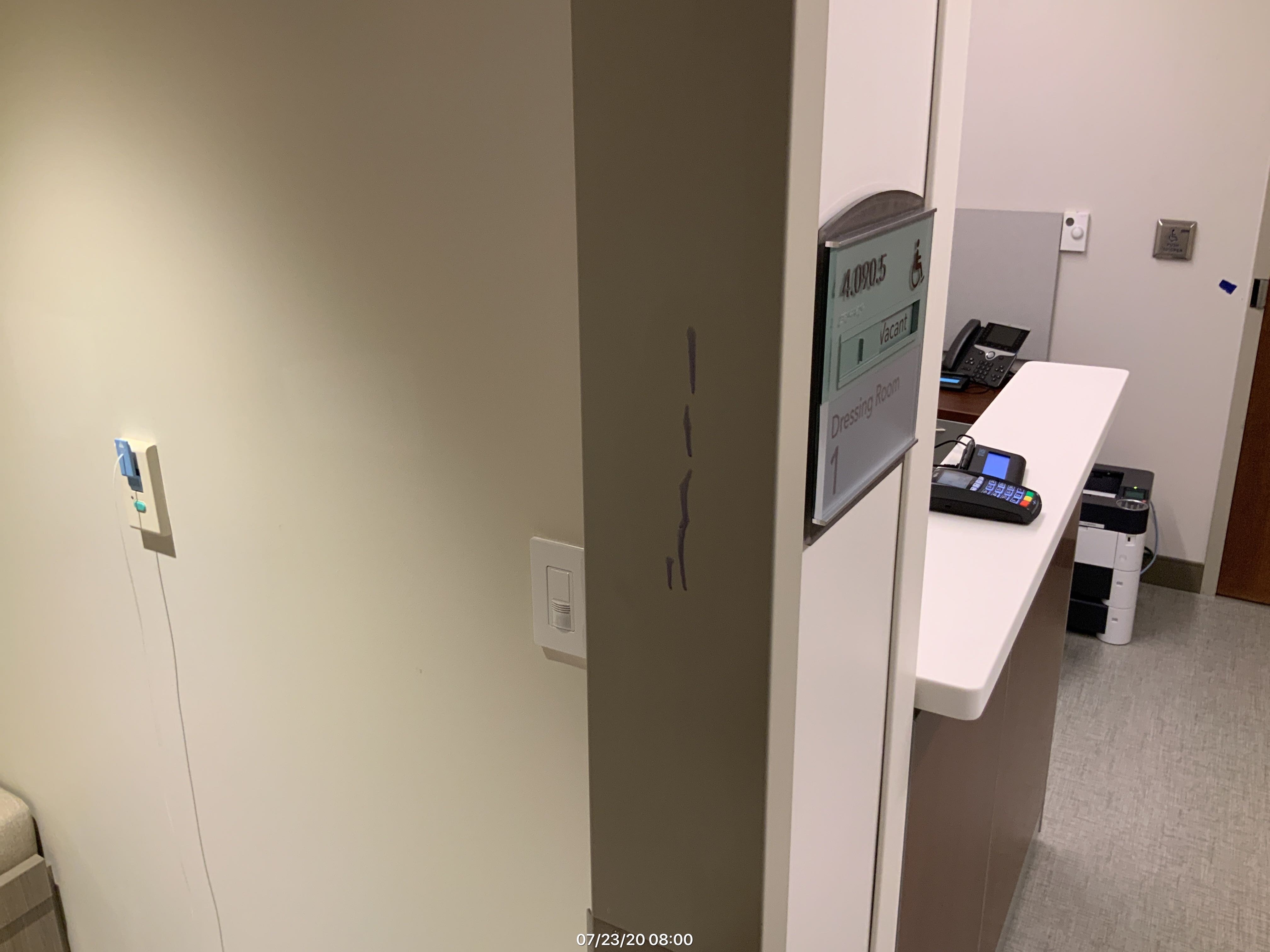 I'm a commercial painter and the building I'm working has several hollow metal door jambs that have some really, REALLY tough stains on them. It definitely looks like some type of liquid caused them by the pattern of the stains; splattering and runs. There was/is no residue from the liquid, however I tried wiping the areas down with several cleaners and plain water; vinegar, ammonia, dish soap, baking soda, simple green, etc. I haven't tried any heavy duty chemicals however I did use my normal routine of ; mineral spirits, denatured alcohol, acetone, laquer thinner, toluene/xylene etc. I've also sanded into the metal a bit so as to remove a thin layer but not so much as to have to use bondo to repair a low spot. I've hit the areas several times with shellac, oil based primers, and even epoxy and they keep coming through everything I've thrown at them. I have encountered some tough stains in my 25 years as a painter and have never had this problem. One or possibly more of the aforementioned methods has always taken care of anything I've had to deal with. I've asked several paint store reps and have asked around the construction community as well as other fellow painters and am coming up with nothing more. In researching, the only thing I can really figure it to be would be a deep etching of some sort, i guess meaning that some type of acid got spilled and splashed around somewhere along the line before I got to them. I talked to all the superintendents on this job site and nobody has any idea of how it could have happened here so I'm left to assume that it happened somewhere between the factory and here. I don't know a whole lot about steel door jamb manufacturing so I wouldn't really be able to tell what types of acids might be splashing around at them nor where they might be kept along the way from there to here. If anyone has any insight into what I might be able to do to eliminate these stains, I would greatly appreciate it. This hospital is getting ready to open for business and all the contractors can come up with for a solution is to replace the jambs. There's probably between 15 and 20 of them and I'd rather not have to come back here to repaint them all while this is a fully functioning medical facility. Anybody who works on these buildings will understand why! Thanks in advance for any info.

There is absolutely no way a "stain" could remain on a surface sanded down to bare, solid, metal. The stain must be migrating from somewhere else, e.g., along a blister, underneath nearby paint; or it could be wiped or dripped onto the surface, e.g. from lubricant applied to the mating door surface.

DrMoishe Pippik makes some valid points. My take is similar but include an 'experiment' to determine whether the undesirable mark/anomaly is on the surface of the metal or a discolouration within the paint layer. The answer will point to a cause and remedy.

You did not mention how long it took for the mark to appear after painting. Did it/they appear simultaneously on the door frames at the installation or did the marks slowly appear over some (how much?) time. This is an important detail that is omitted.

Are all the marks similar? Choose an 'average' mark in a convenient location and mechanically remove the paint layer to the base metal. A scraper or sharp chisel to begin and steel wool to finish. If you can pull a paint layer off in one shard, look at the bottom to see if the discolouration is continuous. Save the material in a clean container. Label the sample and take a well lit photo before and after. Date and time for all your 'evidence.'

On half of the mark continue to remove the natural patina from extrusion to reveal the raw steel base. Keep notes so that you know which half has a superficial removal and which half has a deeper penetration into the door frame material.

Treat both halves of the test area as you would an untreated metal door frame ready to be painted. Use your normal procedures ignoring the difference between the halves. Avoid materials you normally don't use such as fillers which may complicate interpreting the results.

Prediction: One or both of the treated halves will not show any mark immediately after painting. If after some reasonable time there is no trace of the problem, treat the remaining door frames in a similar way. If both halves of the test area reveal the problem, consult management and let them deal with the legalities of replacement and liability. You may want to consult a metallurgist at a local university. The paint shards with the discolouration would be of some interest to a paint chemist at your paint supplier's manufacturing facility.

It is highly unlikely that the such a mark is "in" the door frame. A stain takes some time to reveal itself due to chemical reaction of the materials in contact (mixed). I believe the marks could have happened after the fact to all of the affected areas at one time with the same material in a similar manner (a splashed liquid from a sloppy application that might not have been visible when it occurred).

Not the answer you're looking for? Browse other questions tagged paint or ask your own question.

5
What is the best way to paint a windshield wiper arm?
1
What kind of ink could I use for paint my desktop computer? (If there is any)