About a year ago, I lost my Eddie Bauer water bottle, similar to this one: 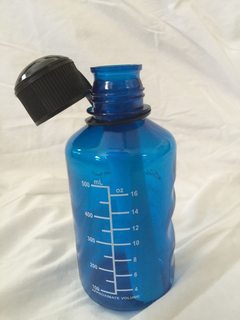 I've been trying to find a replacement, but it seems they've discontinued the model.

With that in mind, I'm planning on purchasing this bottle: 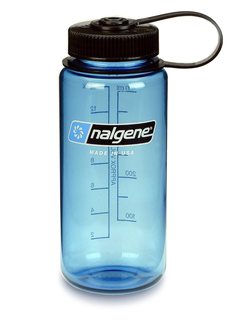 Unfortunately, the nalgene doesn't have the molded grip which so endeared me to my original bottle.

Should I heat the whole bottle up and indent the desired grip with a cool implement, heat up the implement and press it into the bottle, or some other solution?

An ideal answer would not only provide justification for the proposed method, but also suggestions on the most feasible way to enact it.

Currently, Nalgene bottles are made from a BPA Free, Copolyester called "Tritan".

From literature on a similar medical grade version HERE

It looks as though you have to take it to AT LEAST 110C to get it to "glass transition" state, basically meaning it's almost workable.

The difficulty here, is to achieve this temperature, you may need something other than boiling water, or similar.

My suggestion (assuming you don't mind some trial and error, and losing some bottles in the meantime) is to heat the entire unit in an over set to just as close to 110C as you can.

Then using some implements (wooden spoons, kitchen utensils, gloved hands, etc) manipulate it as you see fit. Also, I would cool it slowly to avoid introducing too much stress, too quickly to vessel which could cause cracks.

Note(s): You want to keep the lid on the bottle I'm assuming, so take care not to deform the threaded area around the mouth of the bottle.

Some plastics also have a "memory" to their molded shape, so even if you heat it and form it, the bottle may eventually resume its original shape (part of its benefit for some applications).

IMO - the amount of effort and potential loss of a few water bottles may be more time, energy and cost than an extended research of products online.

If you are keen to do the experiment it should be possible. The volume measurement markings will no longer be exactly calibrated but the error should be smaller than casual measuring would require.

You need to prepare 3 things

EDIT:
The best source for a mask would be a cardboard shipping tube or roll material core that the bottle would fit in with not too much space. Open the hole with a few drill holes and shape it with a fine rasp.

The aim is to limit the amount of hot air that gets past the mask.

The required 120 degC is not very hot and most any non-plastic fibrous material will work.

Sticking a layer of tin/aluminium foil to the outside (or using some form of metallized heat shielding) might be the best if you want to go into production. The reflective shielding would probably allow you to use radiant heating (slower but more controllable) and it would basically be localised vacuum forming.

Not the answer you're looking for? Browse other questions tagged temperature water hardware drinks or ask your own question.