How to clean Blu Tack?

I use Blu Tack quite a lot in my day to day work - keeping things in a fixed position while working on them etc... But I have noticed that after a couple of weeks of usage they become quite dirty either with dust or bits picked up from around my desk which have now become trapped in the Blu Tack's grasp.

Does anyone know of anyway to clean these bits out?
It is making the tack slightly less sticky and not working as well as I would like. I don't really want to buy more of the stuff so if anyone knows anything that would be of help - I would appreciate you divulging said information!

For people who don't know what Blu Tack is I have put a picture below: (not that you'll be much use if you haven't heard of it) 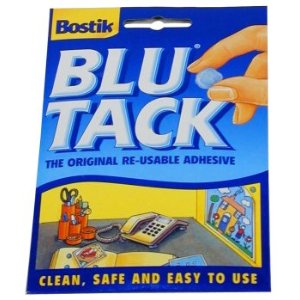 It is used as a way of temporarily affixing something to something else, usually posters to a wall and things like that.

It may be possible to melt it down, burn the impurities, and remold the glue. But here's what you need to consider:

There is a way! Put it in a vinegar like substance (like Non-brewed condiment) this works very well and can be done over and over again

To clean bluetack itself. simply wash under running hot water whilst stretching it out repeatedly for 3 min. Then dry out with a towel. By squeezing it inside the towel for a couple of minutes. Then when dry, squeeze and roll and it should become tacky again.

What I do Is I put anti bac in it and then I mix it it and leave in the fridge in a pot for 48hours and then it becomes all shiny.

Not the answer you're looking for? Browse other questions tagged cleaning home adhesive or ask your own question.

4
How to remove dust from clothing without washing?
8
How to clean a mattress?
1
How to clean crystal stones, healing stones
3
How can I clean a rough, outdoor welcome mat?
6
Plastic wrap sticking to spine of Blu-Ray disc packages
2
How can I clean rubbers side (gasket) of refrigerator?
3
How to clean my humidifier
1
How to clean outside of windows and doors
5
Any insight about suspect "acid" stains on new hollow metal door jambs?
2
Removing Blu-tak from rubber