How can I add oil to a car without a funnel?

Say the oil light turns on in my car, so I check the dipstick and it's low. I have an extra quart in the trunk...

...but I don't have a funnel to pour the oil through.

I once tried pouring straight from the bottle, but since it was a windy day, oil went where it shouldn't have. How can I pour all the oil into the engine?

You could grab like 1 or more pieces of paper, stacked together, and make your own funnel/backboard like mechanism. If you have cardboard paper, I'd use that, since it's stronger. You could use tape to make something very much like the shape of a plastic funnel, or you could just hold it together with your hand. Then when you're done, just throw the paper in the trash. 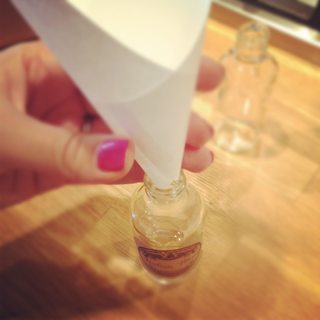 You can make a funnel yourself out of a plastic water or soda bottle you may have sitting in your car. Using scissors, a knife, or even your teeth, you can rip through the water bottle and make it look like the image below. 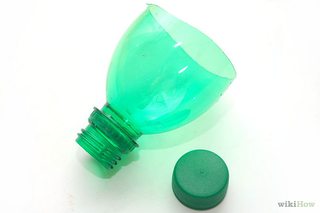 Pouring quickly helps, but if you hold the container close to the hole you are pouring it into it should work.

Modern plastic 1 quart oil bottles have the funnel built in. In the old days of one quart cans of oil, you either used a spout or opened the can with a can opener and poured into a funnel.

You will note that on a modern oil container the spout is offset to one side. The design is meant to place close to the oil opening of the engine and once started you simply tilt it up vertical inserting the spout into the opening.

While the use of a funnel may be necessary on some engines because of an awkward oil cap placement, generally speaking using a funnel to add oil is reinventing the wheel, and will cause more mess and problems then it solves.

the other answers are good but also to help reduce the glugging, therefore the increases the accuracy, pour it so half the pouring hole has oil flowing through it. this can be done by tipping the bottle slowly or by turning the bottle so that the longest edge of the bottom parralell with the ground.

A gas station will give you a disposable paper funnel (they look like these: https://www.freshwatersystems.com/p-9496-1000-konie-10-oz-disposable-paper-funnels-8-sleeves-of-125.aspx). Use the right tool for the job, don't try to create a makeshift funnel unless it's your option of last resort.

Jon LeibowitzJon Leibowitz
15866 bronze badges
Add a comment  |
-1
Want to improve this post? Provide detailed answers to this question, including citations and an explanation of why your answer is correct. Answers without enough detail may be edited or deleted.

Here is a video link: https://youtu.be/cOBn_I-6olw In the first part of the video, he's pouring slow liquids like engine oil with some DIY thing

If you want a quick solution that is easily reusable, and can work for all your fluids (Gas, Windshield fluid, ect.) try using a water pistol.

Just fill the pistol with whatever fluid you need, and point the nozzle right into whatever spout your car might have, no matter how difficult it is to reach.

While it depends on what you have to hand, I'd recommend a smaller, more handheld model for easy portability and manoeuvrability for those hard to reach spouts. 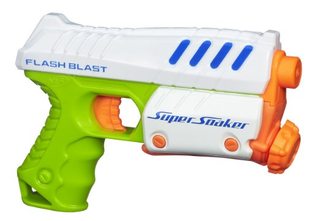 Not the answer you're looking for? Browse other questions tagged substitute-tool car liquids or ask your own question.

8
Removing duct tape from my car without paint damage?
111
How can I figure out which side of the car the gas hatch is on (without getting out)?
6
How do I know if my car tires have enough air without a guage?
30
How to jump start a car without another car
10
How can I clean my car headlights?
3
How can I keep the interior of my car dry while driving in the rain?
7
How to remove sticker from car windshield without tearing it
1
How can I add an affordable unofficial swing table to a Stressless recliner?
0
Clean Automatic Transmission Fluid (Oil) from Car Carpet